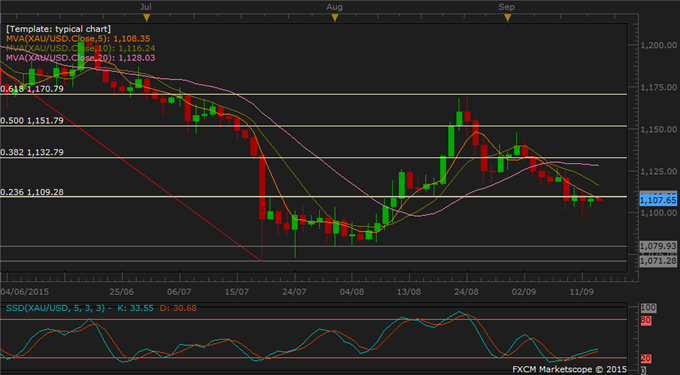 Oil and copper steadily rose during New York and early Asian sessions until losses in the Shanghai stock exchange prompted a reversal. Risk assets were further dragged down before Asian noon time as the Bank of Japan’s meeting statement read negatively on output, exports and overseas economies.

Gold floated above 1100 as market completed bets between hike or no-hike outcome of the Fed’s committee for open market (FOMC) meeting on September 16-17. US Fed futures securities have recently priced in a static 28% chance for a September raise, and gold stuck in sideways moves accordingly. The precious metal sustained above its one-month low at 1098.8.

In the medium-term, however, at least a rate rise by the year-end is almost certain. Market priced in 57.5% probability for a December raise, reflecting the pace of US economic recovery, solid employment growth, and steady inflation. Upcoming data on retail sales and inflation today/tomorrow may reveal more although unlikely to affect FOMC’s verdict.

As a result, gold looks to a bearish period ahead where investors likely dump this zero-yielding asset in favour of interest-bearing securities like equities and bonds, which better respond to a higher rate environment. A resistance level to watch coming up to volatility is the 20-day moving average, which currently tops daily price action at 1128.

WTI oil dipped to what may be the day’s low at 44.03 after the Bank of Japan’s gloomy assessments of external economies. Earlier it topped out at 44.47 then emerged on a slide together with Asian shares. The double hits likely dampen oil prices during the rest of Asian session, until bets ahead of FMOC may bring up volatility in Europe.

OPEC’s monthly report yesterday echoed EIA to predict higher demand for its crude oil next year as US production showed signs of slowing. The group however trimmed its estimate for global oil demand in 2016 due to modest economic growth. While OPEC may declare a temporary victory in the oil war, this has a negative bearing on prices and signals prolonged deflation.

Copper held on to its early gains, lingering in the proximity of a current top at 2.4220. The metal is still near one-week low after a 1.1 percent drop yesterday following China’s disappointing data on fixed assets investment and industrial production. Big macro news will continue to dictate price action and divert market’s focus from supply-demand fundamentals of copper during the rest of this week.

GOLD TECHNICAL ANALYSIS – Gold continued to stay flat in line with 5-day moving averages, with a firm resistance level found at 20-day moving average at 1128. Its downtrend signal continued building while gold is stuck below 23.6% Fibo. The bears may watch out for any volatility up to 10-day MA to consider shorts.

COPPER TECHNICAL ANALYSIS – Copper is currently range-bound between 2.3822 -2.4899, the 23.6% and 38.2% Fibo. Early sign of a reversal after a September’s rally is evident in downward momentum. Resistance level at 2.4899 is critical to further upside moves hence the bears may look to place shorts or stop loss around that. 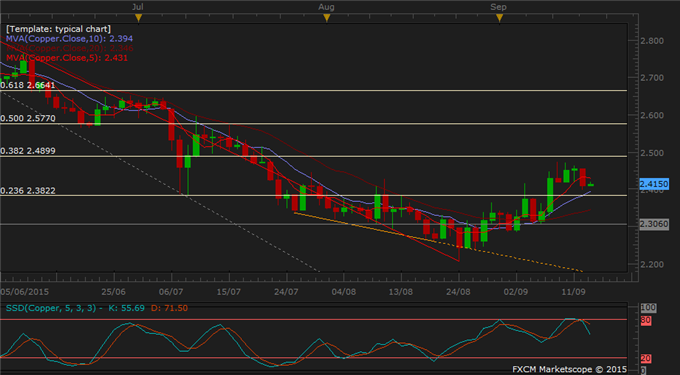 CRUDE OIL TECHNICAL ANALYSIS – Oil has generally remained above 23.6% Fibo at 43.40 and it may continue to do so in the absence of directional signals. This is baring sudden volatility resulting from Federal Reserve’s rate decision this week. Topside extensions also waned together with momentum signal, putting oil in a range of 43.40 - 46.92. 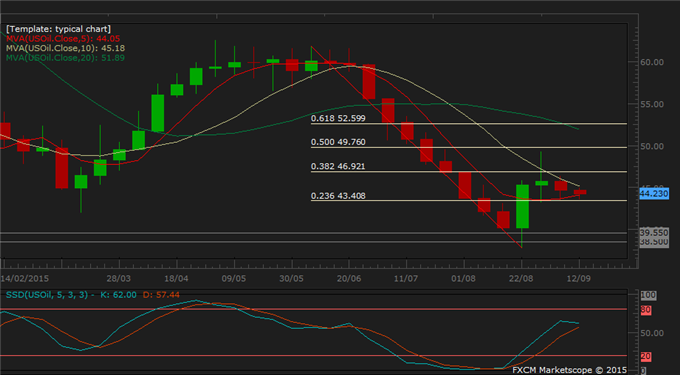