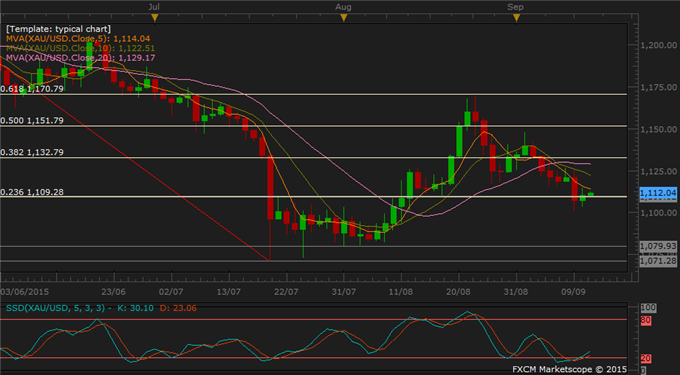 Position adjustments ahead of Federal Reserve’s rate meeting on September 16-17 propped up commodities after their recent slumps. A CNH rally led to rebound of US and Chinese equities, which further supported prices amid thin Asian market. Singapore is off to the poll in a historic election where all of the seats are up for grab for the first time since PAP took reign of the island-country 50 years ago.

Oil staged some dramatic swings yesterday as it pared all the losses from a 43.36 bottom, despite news pertaining to an oversupply. The Energy Information Administration outlined that crude output has slipped to the lowest since January, although stockpile steadily rose by 2.57 million barrels as refineries performed seasonal maintenance.

Obama’s Iran deal reached another milestone as Democrats successfully blocked a disapproval resolution from Republicans in Senate’s procedural vote on Thursday. There will be another vote next week coincidental to the Federal Reserve’s meeting. However timeline for the execution of a possible deal and a removal of Iran’s economic sanctions including oil production will likely extend to 2016.

The near-term outlook for oil remains bearish, amid wavering demand and ample supply. Downward pressure on demand were evident as EIA reported a rise in inventories of oil products like gasoline, distillate, now that peak summer demand has passed.

Gold snapped a five-day losing streak to float above 1110.5 during the Asian session as investors grapple to place bets ahead of Fed’s rate meeting next week. Nevertheless, the precious metal was headed for a third weekly decline since it peaked at 1169.8 in August. Probability for a rise in September has declined this month to 28% per market’s pricing of Fed futures, calculated by Bloomberg.

Volatility may increase in the future if the London Metal Exchange carries out plan to start gold and silver contract as its CEO stated in Mumbai.

Copper steadied with occasional topside extensions in line with regional share markets, given tightening supplies and rebounding demand. The metal is on the longest rally since June. Recent mine closings by large copper producers (as we reported) have put a floor under prices, while China’s growing foreign investment ascertained demand.

GOLD TECHNICAL ANALYSIS – Gold stayed under pressure even with the occasional intraday gains. An immediate resistance is found at 5-day moving average at 1114. Momentum is poised for an upturn and if this realizes the next resistance will be 10-day moving average at 1122.5. Technical signals still point to further downside however the various support levels may hinder this progress. The bears should exercise caution.

COPPER TECHNICAL ANALYSIS – Copper halted below the 38.2% Fibo at 2.4899 on a third day despite a clear uptrend signal in moving averages. This resistance will continue to hinder the topside of copper where a break would be a welcoming sign to the bulls. Possibility is 50/50 as momentum signals look near to exhaustion around top of the band. Downside support is found at 5-day moving average at 2.420 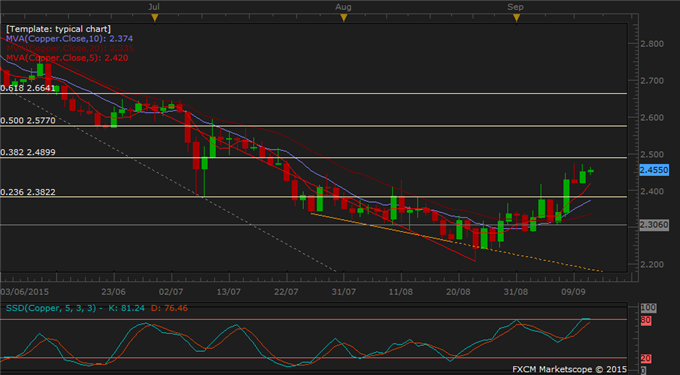 CRUDE OIL TECHNICAL ANALYSIS – WTI oil’s weekly chart shows prices are stuck between Fibo levels in the range 43.40 - 49.76 with a light upside bias. The 5-day moving average has flattened out in an early sign that the recent downtrend may be disrupted, more so given upward momentum signals. Range trades may be considered at either bounds. 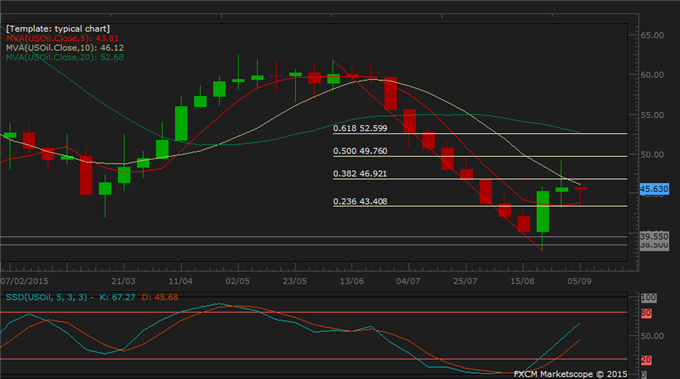