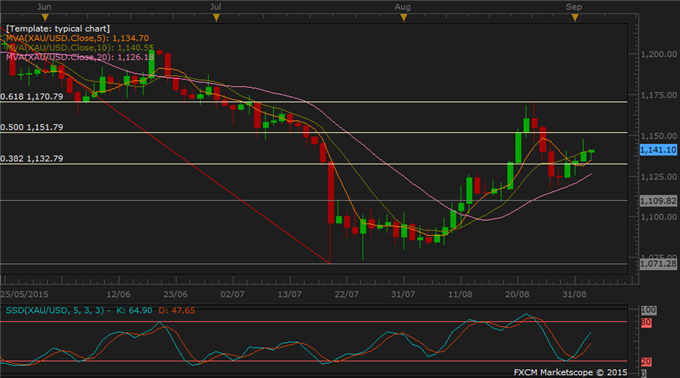 Gold set to re-gain yesterday’s safe-haven gains before bumpy price action during New York and early Asian session pushed it down. The safety assets: gold, EUR and JPY, have moved in tandem with Asian stocks as Nikkei and Shanghai Composite swung from early losses to gains around noon and losses again near closing.

Gold briefly dipped below 1136 early in the morning yet the level looks to hold for a while today given no change in fundamentals. Australia second quarter GDP missed forecast due to external factors was another example that slow growth is still in place.

Today is the last trading day in China before holidays for Victory Day celebrations, and market expected Chinese stocks to post gains in advance, although the development so far is a volatile session.

Oil tumbled during London and New York sessions in a correction almost as fierce as Monday’s rally. The ‘black gold’ gave back 7.7 percent after gaining 27 percent gain in three days. Concerns of China slowdown was followed by American Petroleum Institute’s data of a surprise increase in crude weekly supplies. All eyes are now on the Energy Information Administration’s weekly report today.

Beyond this week, it is a stalemate for oil producers in the fight for market share amid falling prices. Saudi, the biggest producer of OPEC, has been pressured to reduce its output, while Iran is projecting a rapid increase post-sanction. Worries arise over a new normal of low prices, yet there has not been any concrete action to resolve.

WTI oil has held above an intraday support at 43.45 throughout the rally and subsequent crash. Brent oil currently parked on 48.45 despite a brief dip below it yesterday.

After yesterday’s fall on China concerns, copper drifted up and then fell again alongside Chinese equities today. If equity market holds up on the last trading day before China’s big holidays, copper may retain the upside and stay well above yesterday low at 2.2870.

A soft U.S. manufacturing data further tipped the scale for industrial metals and signal possibly deteriorating demand for copper during the rest of this year.

GOLD TECHNICAL ANALYSIS – 1136 continues to be a support level for intraday prices and gold bounced from it during the New York session. The daily chart shows gold retreated after yesterday’s rally failed to test 50% Fibo resistance level at 1151.7, although upward momentum remains intact. Another test of resistance is not ruled out today. Firm support level is found in the region of 1132.7-1134.6 where 38.2% Fibo collides with 5-day moving average.

COPPER TECHNICAL ANALYSIS – Copper mostly mirrored Chinese (and Asian) stocks today, briefly dipped below 2.2930 intraday support early in the session together with Nikkei’s loss before it picked up alongside Shanghai Composite. It is sliding again after Asia noon time although the support level may hold gingerly throughout today. Overall, current prices remain well above August support trend line, therefore there is plenty of room for copper to fall further at any downside shock. 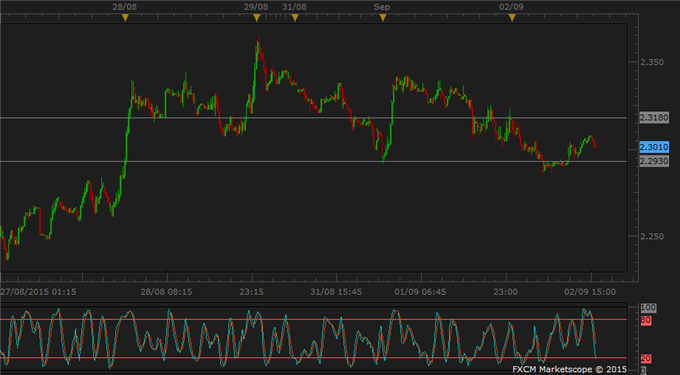 CRUDE OIL TECHNICAL ANALYSIS – Oil reversed three-day gains with a violent crash after it failed to break the weekly 50% Fibo resistance, as we forecasted. In the daily chart, momentum signals are poised to downside, hence prices will likely stay under pressure in the absence of directional moves. Support levels of both WTI and Brent can be found at 20-day moving average, at 42.57 for WTI and 47.88 for Brent. 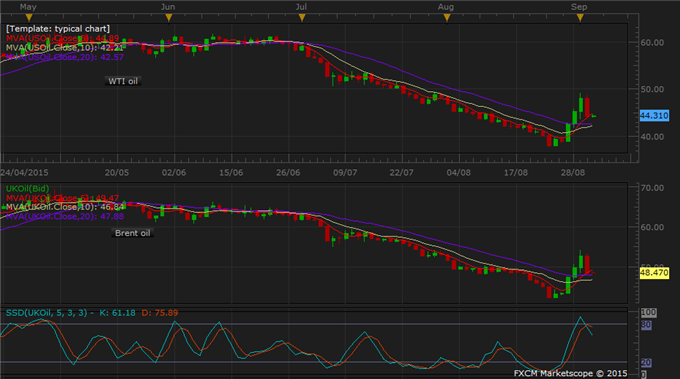