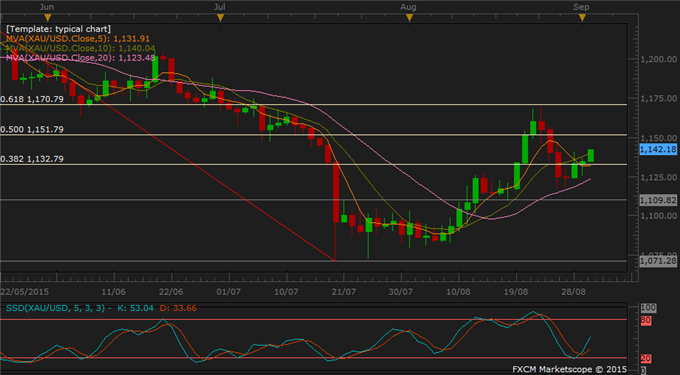 Major data in Asia Pacific this week is a gauge of China factory growth called Manufacturing PMI from both governmental source and Caixin/Markit, with 50 as the dividing value between expansion and contraction. The official reading came in at 49.7 in contraction zone for the first time since February and the lowest reading since August 2012. Caixin final reading was 47.3 higher than the Flash at 47.1 but still the lowest since 2009.

Asia market quickly reacted with risk-off sentiment including losses in equities led by Shanghai index and gains in haven assets such as gold and JPY. Both PMI estimates in contraction zone is not a good sign for China, who is grappling with a volatile equity market.

Gold will likely stay elevated throughout this session, with resistance level at August 26 high of 1146.64.

Oil saw a whirlwind of price action from rally in New York to a retreat early in Asia and eventually stabilized after China PMI. WTI oil bounced from a low at 47.23 prior to the official reading to stay flat around 47.80 afterwards.

The overnight surge in oil to 49.33 concluded a bull market with 29 percent gain since August 24 low. However the rally was mostly knee-jerk reaction after OPEC monthly bulletin stated a willingness to cooperate with global producers to achieve ‘fair price’, and a new survey-based production gauge by Energy Information Administration reduced its January-June output estimates.

Overall, the oil rally is likely short-lived as OPEC reported a monthly output rise for August with Iranian production at the highest in three years, despite curtail production from Saudi and Iraq. Oil may stay dormant until API and then EIA release weekly stockpile reports.

Copper dipped on China PMI alongside industrial metals but soon recovered in line with Shanghai stock index. The index reverted its 3.28 percent loss early in Asia with a 0.5 percent gain by noon. Accordingly, copper recovered around 2.3330 after it fell to 2.3235 - near the 20-day moving average at 2.32. An enduring drop in New Export Orders within PMI was a low note for industrial metals and potentially capped the upside of copper.

GOLD TECHNICAL ANALYSIS – Gold rallied on a third day and heading toward 50% Fibo at 1151.7, after today prices made a clean break above 38.2% Fibo at 1132.7. More upward momentum is in store which is good news for the gold bulls although they should keep stops trailing resistance levels - currently found at 50% Fibo. There is no uptrend signal yet.

COPPER TECHNICAL ANALYSIS – Copper prices have swung around the intraday support levels at 2.3180 and 2.2930 that we highlighted a few days ago. Today prices will likely be contained above the first support. There have not been directional moves after a sharp rise on August 28, and no signals that the August descent is over yet. The bears may take advantage of rally to position shorts. 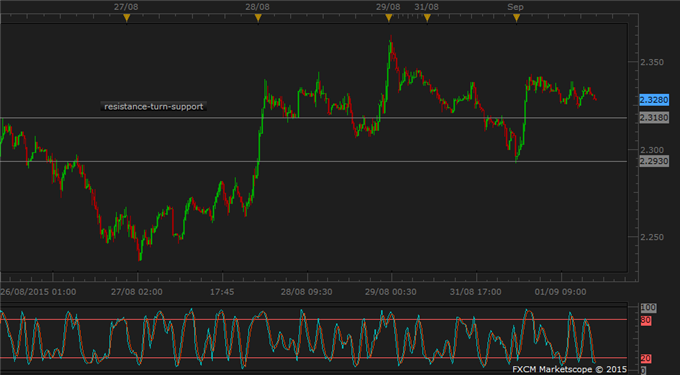 CRUDE OIL TECHNICAL ANALYSIS – WTI oil’s weekly chart shows prices rallied past 38.2% Fibo yet stopped short of 50% Fibo which coincides with the 50 critical level. This resistance may prove resilient, especially given muted price action in the region of 47.80s today. The oil bears could keep watch of the weekly Fibo levels for early signs of reversal. 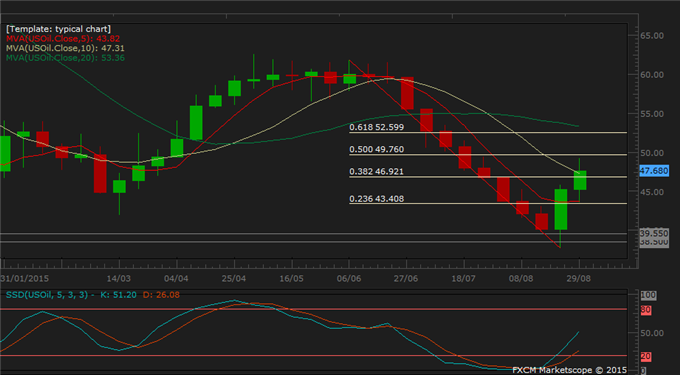