Asian stock markets followed US stocks on a relief rally with the Shanghai Composite, Nikkei, ASX 200 all showing gains of over 1.5 percent. Regional markets also started the day on a high note with decidedly upbeat comments by the Bank of Japan Governor Kuroda at a speech in New York.

Among positive notes on Japan, Kuroda offered optimistic views on global scene: a U.S. rate rise would mean good sign from US economy, China is likely to achieve 6-7% real GDP growth, and there is no currency war at present. Also cheap oil should have a favorable impact on the economy in the long run.

Commodities tracked equities on a rebound with over 1.5 percent gains in oil and copper early in the Asian session. Oil also garnered support after government data from the U.S. Energy Information Administration showed an unexpected drop in weekly inventories, the biggest since June. WTI oil maintained its new-found range between 38.50 and 39.90 while Brent oil is heading up to test the 44.50 resistance level after muted prices yesterday.

Both oil indicators scored over 2 percent upward by Asian noon time. Monday’s dips appeared to be the bottom of oil prices for now.

Gold’s appeal slipped as investors moved away from safety assets and into equities once more. Bonds, JPY, and EUR bore the same fate. Gold is currently trading above its 20-day moving average at 1116.5, at 0.5 percent loss. The precious metal will likely be on the back foot for the rest of this week with Jackson Hole summit of central bankers and economists happening these three days in the US. Despite a no-show by Federal Reserve Chair Yellen, the event can be counted upon to provide insights on world market and U.S. interest rate hike.

Copper got a head start from overnight equity rallies, followed by early gains in the Shanghai stock exchange. This was in good time after its losses during the London session as stockpiles on the London Metal Exchange climbed to the highest in nearly two year. Copper is quickly rising toward Tuesday’s high at 2.3040 and the August support trend line holds firmly on the downside.

GOLD TECHNICAL ANALYSIS – After a third day of lower-low and lower-high yesterday, gold seemed to establish a new daily range above its 20-day moving average at 1116.5. Downward momentum dominates the daily chart and upside potential seems limited until the next event risk unfolds. Gold bulls who are stuck with long positions may still find some reprieve with market volatility by then. 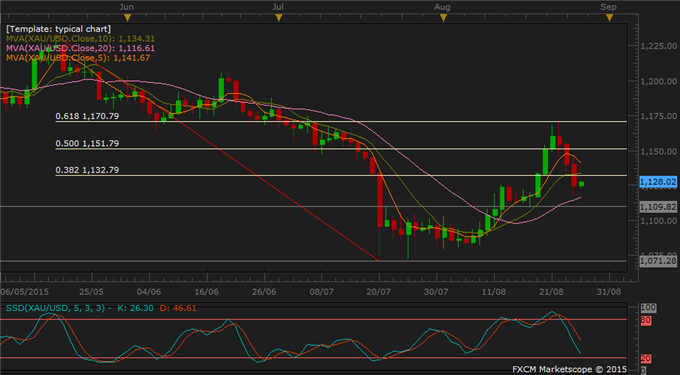 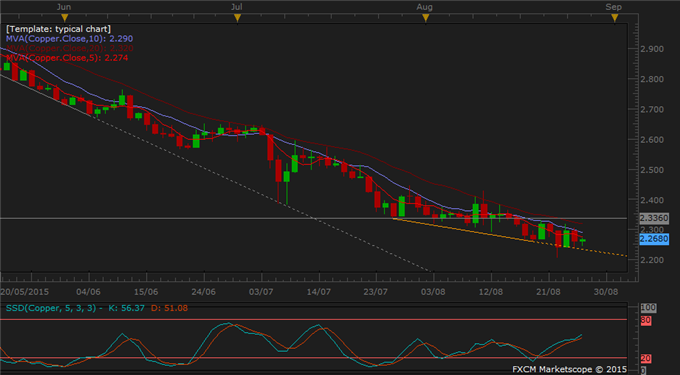 CRUDE OIL TECHNICAL ANALYSIS – WTI oil and Brent oil are climbing to test resistance levels at 39.89 and 44.50 respectively. The intraday chart below shows WTI oil in its narrow band, with Brent in white. Daily momentum signals in the daily chart have changed to an upturn after prices hit bottom on Monday, hinting at more advances ahead. Oil prices likely focus on the upside particularly if resistance levels are broken in the next few sessions. 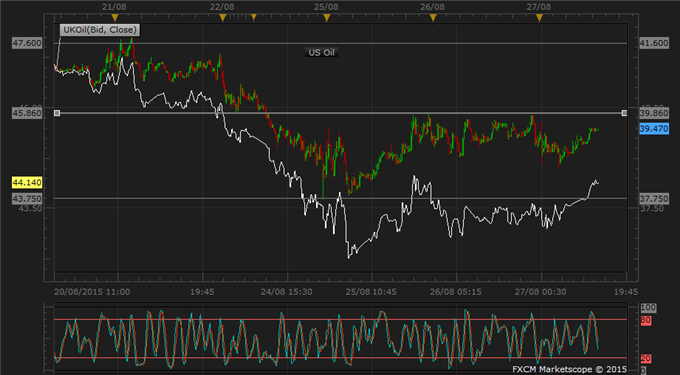 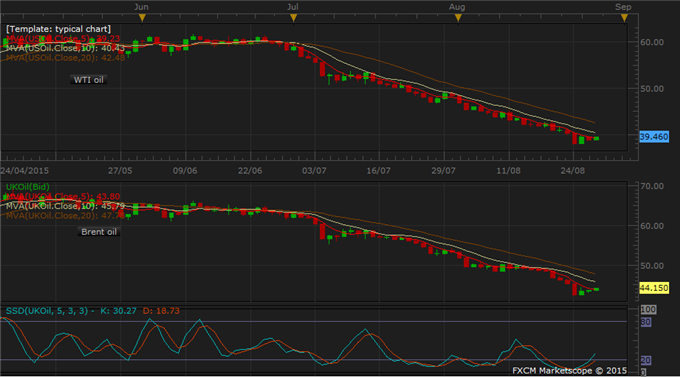