Broad commodities set to sustain yesterday’s recovery after the latest China’s measures, despite Chinese and US equity slump in the previous session. Volatility in world equities has emerged as the prominent driver in foreign exchange whereas its correlation with commodities has relaxed over the course of this week.

The most anticipated development today is converted effects of China’s cuts in interest rate and Required Reserve Ratio (RRR) last night, as well as increased margin requirements for trading of stock index futures. China has recently intensified efforts to bolster its economy with major governmental meetings in July and an annual high-level party summit in Beidaihe are now behind them.

In the US, Federal Reverse’s Jackson Hole summit comprising of world central bankers and economists promises views on a variety of macro topics.

Gold seems to have lost its appeal earlier in the week along with bonds due to position adjustment after Monday’s surge and as safe-haven bets shifted to EUR, USD, and lately stocks after China’s rate cuts. Gold is on a reversal from its peak at 1170 and today’s support level is found at a double bottom at 1134.7, ahead of 38.2% Fibonacci at 1132.7.

Both WTI and Brent oil sustained recovery from a bottom on Monday at 37.75 and 42.26 respectively, after industry data by the American Petroleum Institute showed U.S. crude stockpiles declined last week in contrary to an expected rise. Today’s inventory data from the EIA will be a deciding factor for oil prices which have swung around in the midst of volatile global markets.

At more than 35 percent down from this year’s peak in June, oil may have hit a bottom as China concentrated efforts to revive the economy. Event risk ahead is US Congress’s vote on Iran deal on September 17.

Copper recorded nearly 1 percent loss together with the metal complex after China market opened. The metal has put on hefty loss and then gain in the past two sessions, hitting a six-year low on Monday. Fundamentals of supply and demand seemed unperturbed with steady warehouse stockpiles at COMEX and demand from China. The Financial Times quoted Diego Hernández, Antofagasta’s chief executive, that copper prices are suffering more from a negative sentiment on China than actual demand slump.

GOLD TECHNICAL ANALYSIS – Gold has formed a double bottom at 1134.7 which may hold as an intraday support level in current session. Gold headed for a reversal after last week’s rally propped it to a peak at 1170 earlier in the week. The daily chart shows momentum signals biased to downside with daily support level found at 38.2% Fibo at 1132.7. 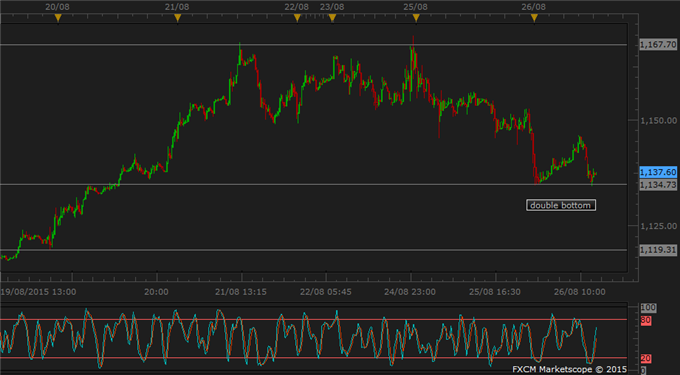 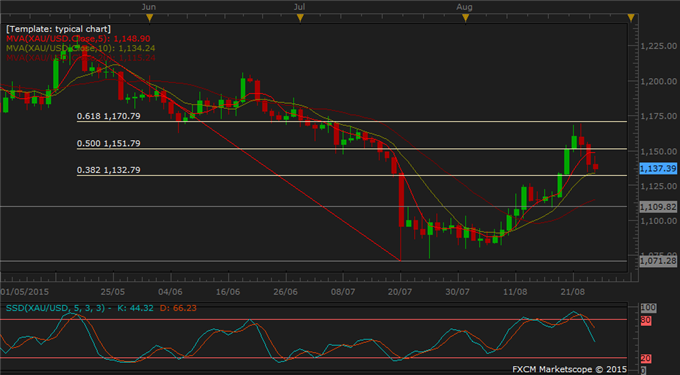 COPPER TECHNICAL ANALYSIS – Copper prices touched down to support trend line yesterday and the line is expected to hold again at 2.2386 today. Copper has been edging down during this month, with intraday swings corresponding to the movements in China stock market. Topside is capped by 20-day moving average at 2.326 where the bears may consider to place their shorts. 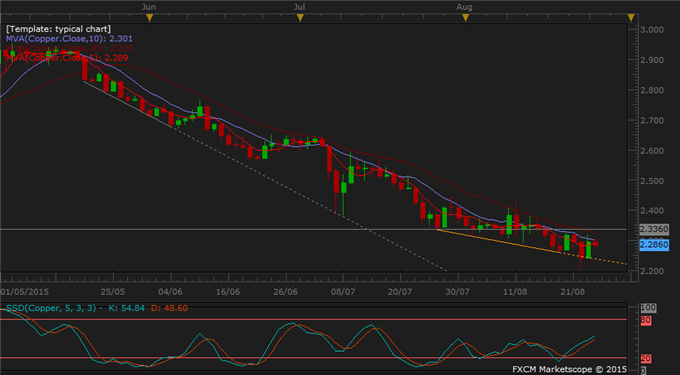 CRUDE OIL TECHNICAL ANALYSIS – WTI oil stayed elevated above an earlier record low at 37.75, with today’s prices ranging between 38.70 and 39.80. Intraday price action looks subdued with topside restricted at 40 mark, a previous support level that was broken on Monday. Traders may keep watch of this level for any signs of recovery. 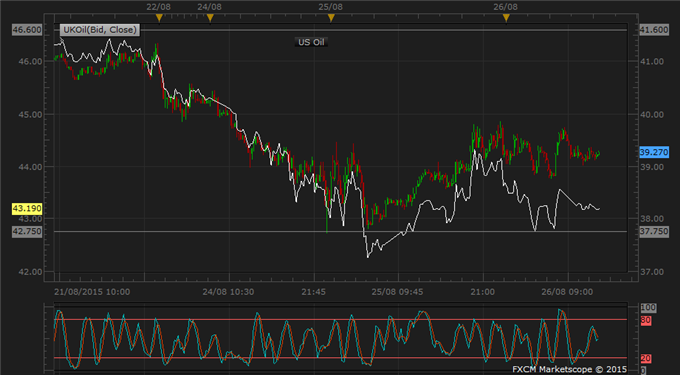