During the New Yorksession, minutes from the last meeting of the Federal Reserve appeared not to satisfy the market’s thirst for hints on the timing of its first interest rate rise, previously projected to be in September or December. The minutes emphasized risks to inflation, which has missed the 2 percent target for three years and recently took a hit from China’s currency devaluation. This appeared to cloud the chances of a September hike and dragged US dollar down, which is positive to commodities prices.

Gold emerged a winner as the Fed’s minutes eased interest rate concerns for bullion investors, resulted in the biggest advance in three months at 1.5 percent. It has gained 1.1 percent in the Asian morning and surpassed the previous session high at 1134.57. There seems to be sufficient momentum for gold to consistently edge up during today’s trade, as Asia markets digest and react to the Fed’s clues.

Oil crashed to a new six-year low of 40.40 in the US session after the Energy Information Administration’s weekly report revealed a tremendous surprise of additional inventories at 2.6 million barrels, in contrast to an expected drop and a huge drop of 2.3 million barrels reported by API yesterday.

Oil prices have so far consolidated in the proximity of this record low level, and will likely be led by intraday movements in the US dollar. Downtrend signals have firmed up in the charts of WTI and Brent oil, hinting at more downside moves ahead.

Copper also fell to a six-year low on signs of oversupply after the World Bureau of Metal Statistics reported that production had exceeded demand by 151,000 metric tons in the first half of this year. The group also estimateda 295,000 ton surplus in 2014.

This surplus situation seems to last, with records from the London Metal Exchange showing inventories have doubled this year to near the highest since January 2014. Pressure from both supply and demand factors will likely keep copper prices low, with China’s demand a wild card on the table.

GOLD TECHNICAL ANALYSIS – Gold set for further upside after it opened near yesterday’s high in the Asian morning. A resistance level is found at a past daily high at 1145.70. The moving averages have formed an uptrend signal in the daily chart, and there are no strong resistance levels on the way up. However gold bulls may exercise caution as momentum signals are at their upper bound of the range, a hint that they may be reaching a peak and subsequently change direction in the near future. 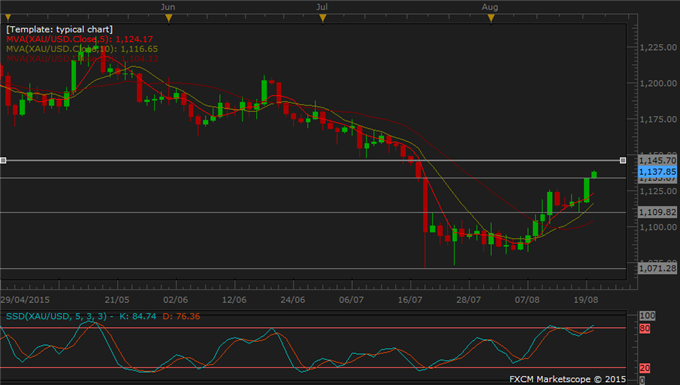 COPPER TECHNICAL ANALYSIS – Copper remained below 5-day moving average at 2298 with downtrend signal becoming clear. However today’s gains may disrupt the lower-high and lower-low pattern in the last four days, and mark the start of a correction period. We continue to monitor 5-day MA and momentum signal for clues of further downside or sideways moves. 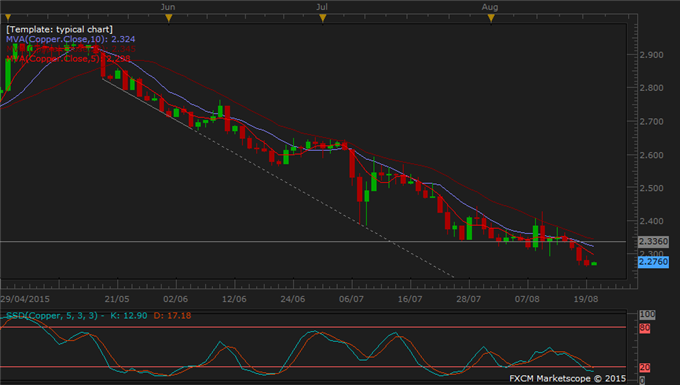 CRUDE OIL TECHNICAL ANALYSIS – A multi-year low at 40.79 in WTI oil’s earlier dip is taken as a weak intraday support level. Prices seems to be on a consolidation after the overnight price crash, with intraday momentum swinging directionless. Brent oil followed WTI in sideways movements. Downtrend signals in both oil indicators firmed up in the daily chart, a good sign for the oil bears. Bulls and bears alike should keep watch of 10-day moving average at 42.54 (in WTI). 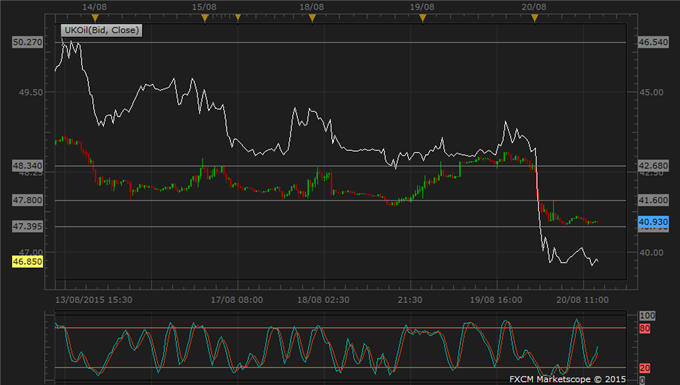