Commodity pricescontinued to fall on a rising US dollar, coming up to a string of US economic data this week: building permits (today), CPI (Wednesday), Fed’s minutes of last meeting and Initial jobless claims (Thursday).

A Moody’s global outlook report forecasted China growth to be under 7 percent in this year and the next, although government’s significant stimulus would ensure a soft-landing. If correct, this would provide some support to commodities demand.

WTI oilhalted its decline ahead of a multi-day support level at 41.60 amid reactions from world’s oil exporters to the recent price slump. Algeria’s Energy Minister reportedly called for reduced supplies from countries outside of the OPEC group. Brent oil remained stuck in a two-week consolidation supported at 48.22, a recent double daily lows. Since last session, the WTI-Brent spread has narrowed from a multi-month wide gap of $7, a positive sign for WTI prices which have consistently fallen despite Brent’s steadiness.

Oil prices will be sensitive to the upcoming weekly inventory reports in which stockpiles are projected to fall, published first by the American Petroleum Institute and then by Energy Information Administration.

Gold held gains following an overnight advance after a very weak New York Manufacturing index casted doubts on an interest rate rise next month. Gold prices move in reverse of US interest rate expectations and the US dollar. Probability for a September hike is currently priced at less than 50 percent chance and gold investors will be watching upcoming macro developments that may suggest a change in timing.

Copper set for a third day of decline under a mixture of negative influences from China’s weakened currency to its slow growth and a strong US dollar. China is the world’s largest copper consumer and data from external sources so far has hinted at an annual GDP lower than the targeted 7 percent. Looking ahead, US dollar is the first variable to copper prices, followed by China’s stimulus measures.

GOLD TECHNICAL ANALYSIS – Gold remains elevated above a support level at 1109.82, although further upside extension seems rather limited with momentum signals on a downward reversal. The gold bears may still hold out for rallies to enter short positions. Gold bulls may find short-term trade opportunities around economic data releases. 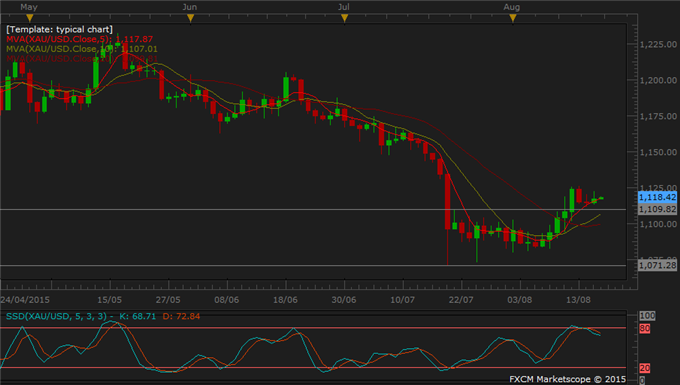 COPPER TECHNICAL ANALYSIS – Copper prices still reflect a downside bias although the 15-minute chart indicates that an intraday support at 2.3070 is holding prices up. Price action seems muted today after yesterday’s sizable drop. Despite recent lower moves, copper remains stuck in a correction period and there have not been signs for a downtrend resumption. 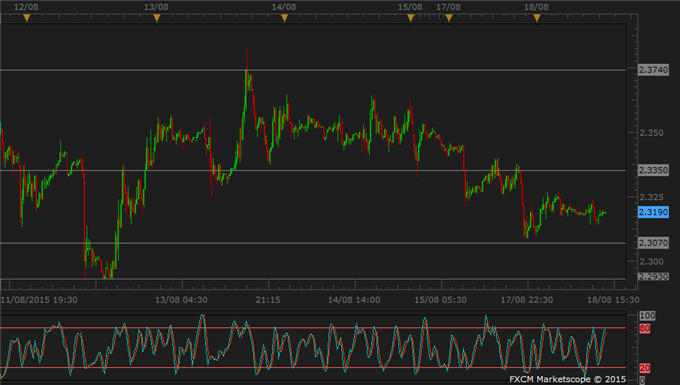 CRUDE OIL TECHNICAL ANALYSIS – WTI oil pauses above a past double lows and support level at 41.60. Downward intraday momentum looks near to exhaustion, which may help to retain prices above support. There has been no change to downtrend signal on the daily chart, although the weekly chart of WTI oil also displays a momentum wane ahead of a multi-year support at 39.55. The oil bears should keep close watch of their stops. 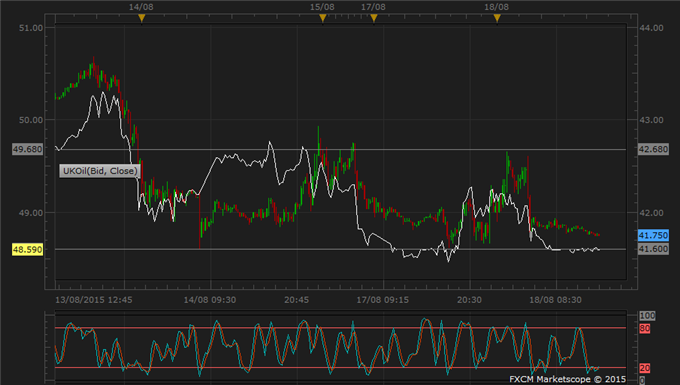 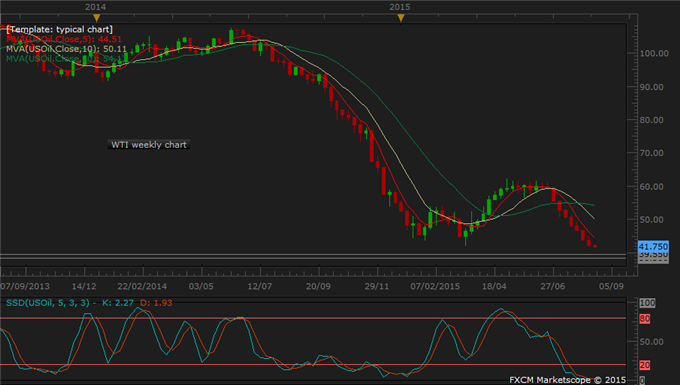