Gold a Winner While Copper Vulnerable from China Currency Devaluation

Gold enjoyed a wild ride in the previous session which carried on today, as consecutive low renminbi rates pressured other Asian currencies to this year’s record lows and threatened widespread currency devaluations. Gold suddenly gained back appetite as a storage of value versus deflated currencies.

Gold demand also rejuvenated after the recent dump in expectation of higher-yielding investment environment which would start with rising U.S. interest rate. The higher USDCNY exchange rate posed threats of a deflationary shock to the US economy with China being its largest trading partner, in a way similar to effects of an interest rate hike. This may be taken as a new consideration to the Federal Reserve’s rate decision, especially at this close to a provisional September rise.

Bullion continued to rise in the Asian morning, ahead of a resistance and past daily high at 1134.20 that coincides with 38.2% Fibonacci of May-July descent at 1132.79.

The case for overnight gains in oil and copper was less clear-cut. It was likely a combination of a temporary slump in the US dollar as market players took profit of long USD trades, and a positivity that the lower renminbi and upcoming stimulus would revive China’s exports growth and subsequently commodity demand. Since this was detailed in our report yesterday, more signs have emerged that China’s central bank is keeping this devaluation under control as part of a concerted effort.

Oil sustained today’s gains after the release of daily CNY fixing, with Brent oil rising more firmly than WTI. Both prices were mostly tuned on to price action in asset markets, although they were also lifted by a weekly output fall reported by both the American Petroleum Institute and the U.S. Energy Information Administration.

Brent is heading up to 50 big figure today, after it came up to 49.98 in the New York session. As such, we may see a retest and possibly a breach of this level today.

Copper gave back most of yesterday’s gains after another low renminbi fix, contrasting to the stock rallies across Shanghai Composite and Hong Kong’s Hang Seng. The metal is most sensitive to China’s economy and market, hence this drop will likely be cut back today. There is plenty of room for copper to extend on the upside, with resistance being past daily high at 2.374 and 20-day moving average at 2.382.

GOLD TECHNICAL ANALYSIS – Downtrend signal in gold has finished and all eyes are on the upside for now, with a resistance level ahead at 1134.2 and the 38.2% Fibo at 1132.79. Daily momentum seems to peak today after four days of strong gains with prices in higher-high and higher-low fashion. Downside extension is limited and an indicative support level is found at 5-day moving average at 1110.95.

COPPER TECHNICAL ANALYSIS – Copper lingered near yesterday’s band, well below the daily highs of Monday and Tuesday. As such, there is room for it to rise up to a resistance at 2.374. On the below intraday chart, copper was on a light rebound after it fell following today’s CNY fix. Limited downside is expected today with a weak support at 2.3125 and a firm floor below that at 2.2930.

CRUDE OIL TECHNICAL ANALYSIS – Brent oil steadied right below the 50 big figure and the question remains whether it can break above the level today. On the daily chart, there are signs that Brent is going through a consolidation whereas WTI is still on a downtrend. Oil traders should watch the 10-day moving average in both indicators, as a break above that may bring current downside momentum to an end. 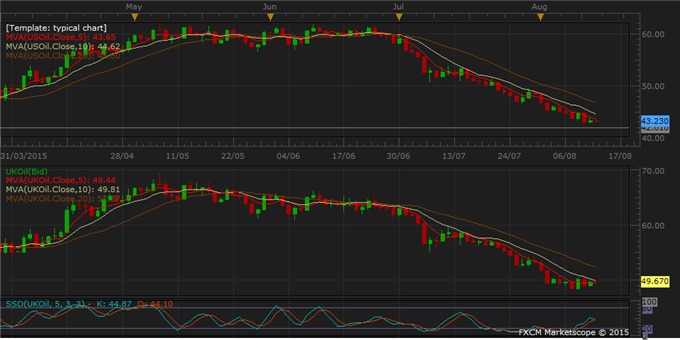