People’s Bank of China (PBoC), the Chinese central bank, delivered a second bearish fixing on their currency today. The USDCNY pair was set at 6.3306, 1.62 percent higher than a two-year high yesterday. China’s currency is known as yuan (CNY) inside the country and renminbi (RMB) outside of it.

This immediately put more pressure on commodity prices due to both China demand concerns and a higher US dollar. Gold, WTI oil, Brent oil, and copper dropped after the fix came out as they did yesterday. A weaker CNY also boosts the USD as investors rush out of renminbi and into US dollar assets.

In the long term, however, this could be a positive step in how China governs its economy and currency. As usual, any good news to the Chinese economy is good news for commodities demand. Firstly, the PBoC announced yesterday that it would take RMB ‘fair price’ from market makers into consideration, putting it another step closer to a free-market exchange rate. Secondly, a low currency tends to boost exports, a welcome development after Saturday’s negative data. Thirdly, this may signal other stimulus measures to follow.

Copper and industrial metals were hit the hardest by today’s low renminbi fix. It fell over 1 percent to a new six-year low of 2.2930, although followed by early signs of a rebound. Given high intraday volatility, it is hard to gauge how high copper may bounce back. Resistance levels are at 2.3190, 2.3350, and 2.3470.

WTI and Brent oil remained above their overnight lows that were brought on by an OPEC’s report of July output increase. Production rose by 100,700 barrels a day, the most since 2012. Today price swings may hold up above their previous lows and support levels at 42.68 in WTI and 48.60 in Brent.

Gold quickly pared its post-RMB losses to reach current daily high at 1113.15 after it scored a three-week high at 1119.31 yesterday. The devaluation in renminbi could induce similar actions from China’s trade partners and exporting competitors, which would benefit gold as an alternative form of storage for currency value. Gold prices today likely stick within a range formed by pre and post-RMB swings at 1101.61-1113.15, although higher moves towards yesterday high at 1119.31 are not ruled out.

GOLD TECHNICAL ANALYSIS – Gold established an intraday range of 1101.72-1113.15 as the swings faded on another day of China’s renminbi devaluation. Volatility remains high so day traders had better take caution, especially with regard to upside extensions. Yesterday high of 1119.31 is a strong resistance level for the gold bears to watch. 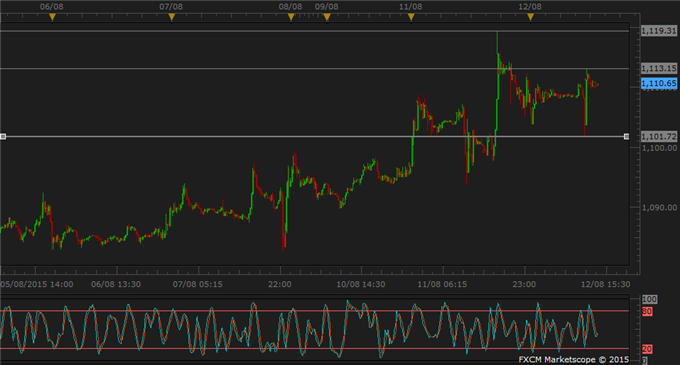 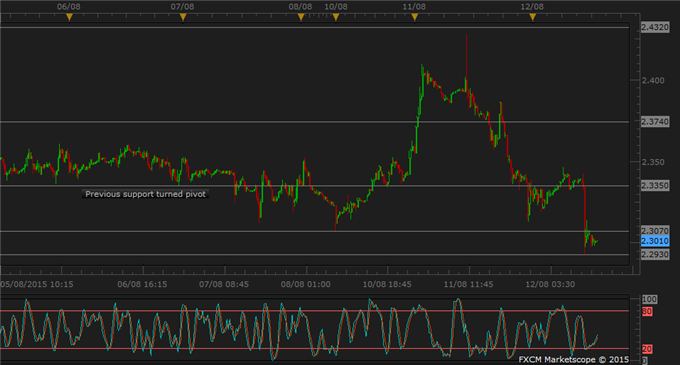 CRUDE OIL TECHNICAL ANALYSIS – Downtrend signals remained firm in the daily charts of WTI and Brent oil, despite recent volatility. Today’s lows have been established at 42.68 in WTI and 48.60 in Brent. Intraday prices will likely hover near these support levels with no upside potential. 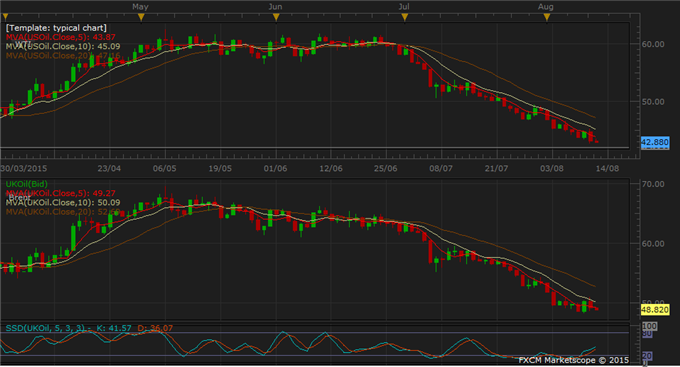