Commodities staged the biggest rally since February in yesterday’s session, following a jump in Chinese stocks. The Shanghai Composite gained nearly 5 percent and approached the 4000 mark. Trade data on Saturday was believed to be bad enough to warrant additional stimulus measures from the Chinese government, which would likely boost growth in the near term.

This was partially affirmed with rumors on mergers of state-owned enterprises. However a record devaluation of the yuan today spurred demand for US dollar and reversed some of the gains in commodities.

Gold retreated after China lowered the yuan fixing against the USD to stem a fall in exports. It opened near yesterday high and will likely be capped by a resistance level at 1109.28. Gold demand added some traction after the ambiguous messages from two Federal Reserve members about the timing of upcoming interest rate normalization.

Bullion will likely test the upper bound of its current range at 1109.8 today, after an attempt yesterday. However it is unclear whether gold will gather enough momentum for a breach above that.

Oil stayed static after it weakened the most among commodities shortly after opening. Overnight it saw the biggest rally in two months as China’s crude oil net imports were reported to rise 28 percent from last year. China was increasing refinery runs to boost its oil exports and satisfy modest domestic demand, which would provide some support to crude oil demand.

Copperlost ground during Asian trade after its daily high exceeded the previous high. Hope of stimulus and a positive China commodity trade report helped to ease demand concerns. Prices gained leverage from a supply disruption reported in Chile copper mines due to heavy rain and mudslide.

Copper reached above the 20-day moving average today although it quickly lost steam and retreated ahead of a resistance level at 2.4450.

GOLD TECHNICAL ANALYSIS – Gold jumped yesterday and reached up to a resistance at 1109.82, which is also the upper bound of its recent range. There are not enough signals on the daily chart to support further upside extension. As such, the current price gains would likely turn into a temporary correction rather than a rebound from its July 20 bottom. The gold bears should keep caution on any clean break of this resistance. 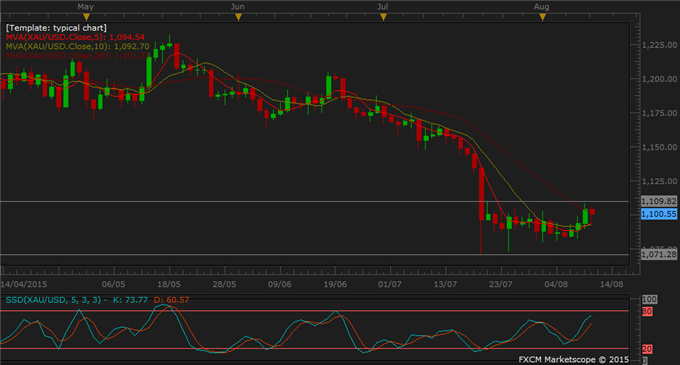 COPPER TECHNICAL ANALYSIS – Copper surged above a multi-day high level at 2.3740 during New York session, although it quickly declined at the start of Asian trade. This intraday support level may hold during Asian session given current momentum lackluster. It is not a bullish time for copper yet although the bears may take advantage of any rally to enter short positions. Signals in the daily chart indicate this is an upward correction. 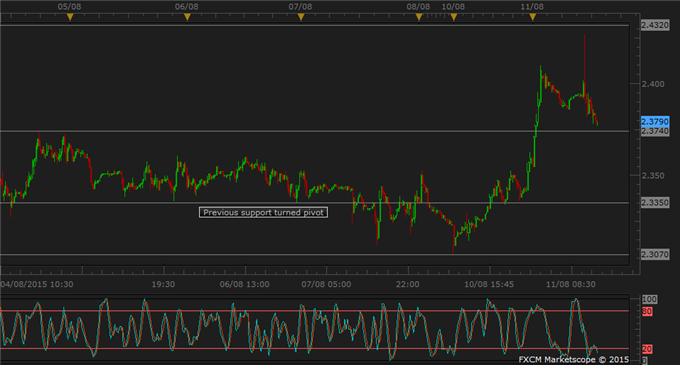 CRUDE OIL TECHNICAL ANALYSIS – Brent oil has taken the 50 mark as an intraday support level as prices bounced off it after a touch down near Asian noon time. Momentum is poised to the upside therefore levels above 50 may provide good entry points for long-term short positions. There is not yet any disruption to downtrend signal in the daily chart. 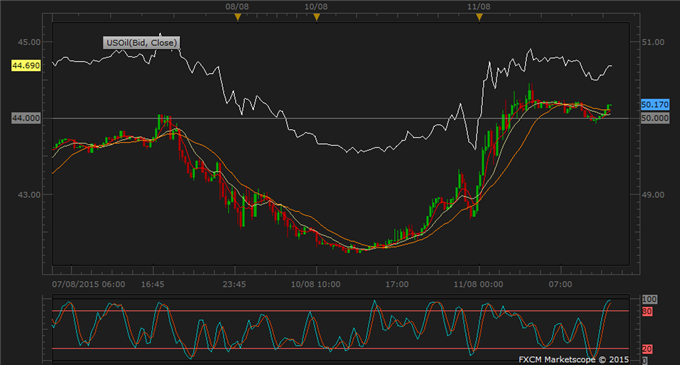