The US dollar plunged after a low ADP Employment Change data in early New York session but bounced up sharply after the release of the highest ISM Non-manufacturing data since 2005. In Asia trade, dollar has lowered moderately with the dollar index down 0.16 percent. This gave commodities a leg up on their way to recovery.

Copper advanced in the morning Asian session after a report that inventories in China’s bonded warehouses fell in July for the first time in four months, as smelters curbed sales due to low domestic prices. The metal has put on 0.34 percent today and is attempting to rebound above the 2.3570 level. There is no change to long-term trend however, as the effect of China’s efforts to stabilise its stock market and boost growth remains to be seen. Copper bears may take caution at repeated failures to breach a resistance of 10-day moving average.

Brent oil slumped below $50 in the London session simultaneous to the rise in US dollar and an EIA’s weekly report showing a surprise growth in gasoline stocks. With the peak summer demand coming to an end, this raised investors’ concerns on an oversupply and overrode a big drop in crude inventories.

Brent oil has since lingered below $50, albeit a light upside bias today. WTI oil followed suit to edge up in the Asian morning after it fell to the lowest level since March 20. Momentum lackluster today will likely sees the pair holding steady in their current levels and Brent at below $50.

Gold opened marginally higher although it has stayed sidelined in Asian trade, awaiting important U.S. data later this week that may shed light on interest rate projection. A high U.S. ISM Services data overnight likely restricts the upside for gold in this session. Looking ahead, gold may moderate steadily in this new-found region, with a Fed’s rate hike largely priced in at present.

GOLD TECHNICAL ANALYSIS – It is a quiet day for gold as the precious metal moved little from its current position at the middle of the 1071-1109 range, established after the July 20 crash. In the absence of long-term trade opportunity, range traders may watch out for dips to take advantage of subsequent rebounds. 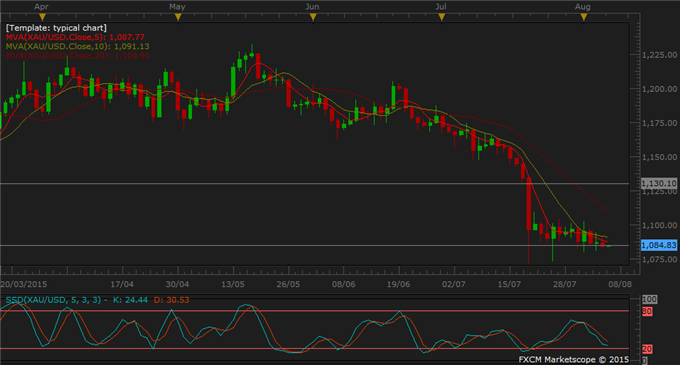 COPPER TECHNICAL ANALYSIS – Copper has finally edged up above 2.3570 near Asian noon as momentum built up for upside extension. Intraday prices could reach up to a multi-day high at 2.3740, above which the rebound would gather force to intensify. Topside is likely capped by 10-day moving average at 2.368. On daily chart, the consolidation continues with no clear signal whether the June-July downtrend is about to resume or has finished. 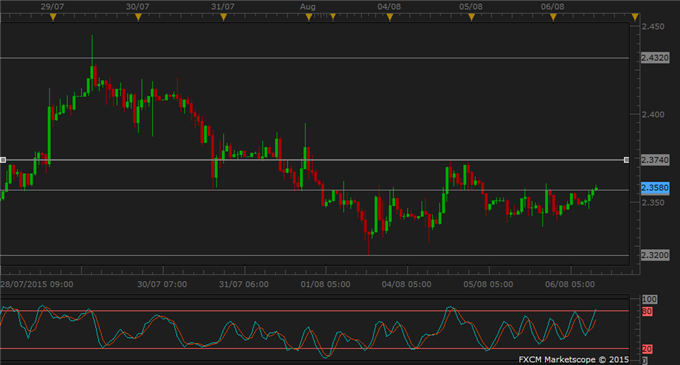 CRUDE OIL TECHNICAL ANALYSIS – Brent oil lingered below the 50 critical level in Asian trade after a sharp plunge overnight. With intraday momentum biased to the downside, lower moves could materialize in the afternoon. Downtrend signal via moving averages is prevalent in the daily charts of both Brent and WTI, with next support levels found at 47.54 for Brent and 44.59 for WTI. Day traders may take advantage of today’s upcoming reversal. 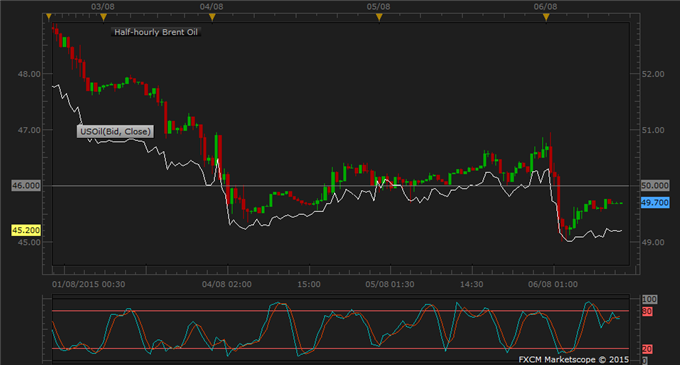