Commodities stabilized somewhat after Monday’s slump, led by oil gains and news of a new round of fiscal stimulus in China, one of the world’s leading consumers. This consolidation seemed unfazed by a stronger US dollar after Fed’s Dennis Lockhart stated his support for a September rate hike in an interview with the Wall Street Journal.

WTI oil gained 1.3 percent in yesterday’s session following a rebound of Brent oil above $50. WTI has put on 0.22 percent today as oil continued to consolidate after Monday’s massive sell-off. The American Petroleum Institute reported a drop in both crude and gasoline stockpiles for the week ending Tuesday. All eyes are now on the more definitive weekly report by the Energy Information Administration on Wednesday (US) which is expected to also show a decline in inventories.

Copper put on the first gain in four days at 0.7 percent yesterday, however gave that back in today’s Asian morning as the US dollar strengthened. In all, copper moved in a sideways fashion on a third day as caution toward the Chinese economy continued to weigh on prices.

Copper and metal bulls may get some reprieve with a China’s stimulus step-up that is reported by Bloomberg to include a new bond program to fund construction projects.

Gold lowered in reverse to US dollar gains after the Lockhart interview enhanced expectation for a September rate rise. Nevertheless, bullion remained stuck in the 1071-1100 range after the July 20 crash brought it down to this five-year low area. Gold players will be watching Non-farm Payrolls and Average Hourly Earnings reports on Friday (US) for hints of economic conditions to facilitate a September rate hike.

GOLD TECHNICAL ANALYSIS – Gold is stuck in a range, with the floor at 1071.2 remains unchallenged. A breach of this support would be necessary for gold to abolish the range and continue on its downtrend. The 1105-1120 barrier persists on the upside. Gold traders may stay put given a lack of indication of directional moves. 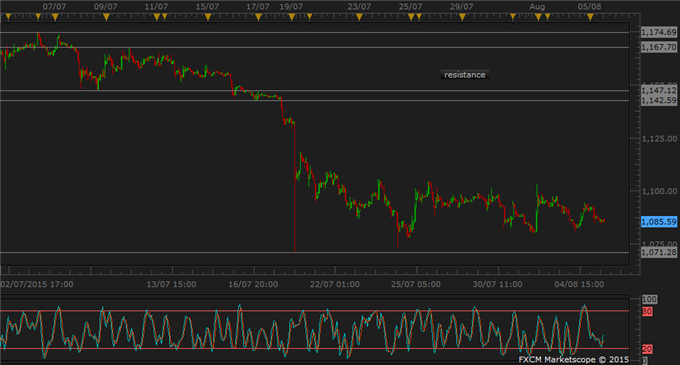 COPPER TECHNICAL ANALYSIS – Copper holds a light downside bias following its overnight descent due to the US dollar jump. Intraday prices will likely stay within the 2.3200-2.3570 range today. Daily prices remain in a sideways fashion although moving averages persistently display a downtrend signal. Copper bears would be wise to take caution if prices repeatedly fail to break below a support level at 2.3200. 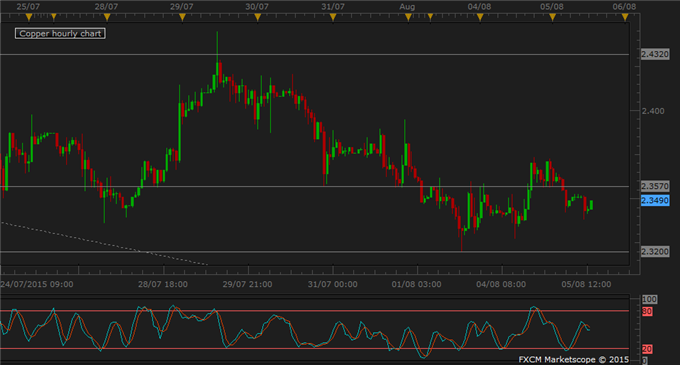 CRUDE OIL TECHNICAL ANALYSIS – WTI oil sets for more intraday gains today with consistent upward moves in the Asian session so far. Intraday momentum signals hint at further upside which present an opportunity for the day traders. At top, resistance levels are found at yesterday’s high of 46.54, then at 48.59 above that. 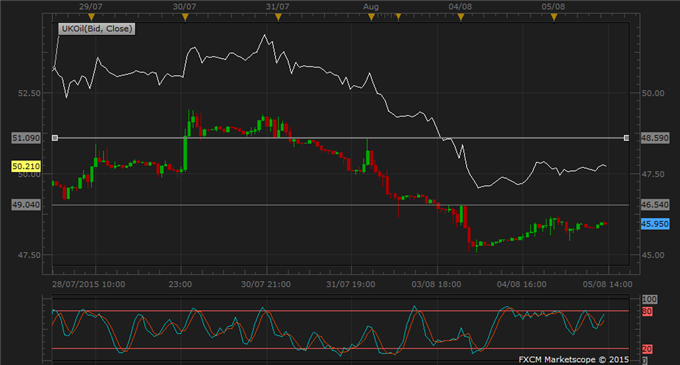