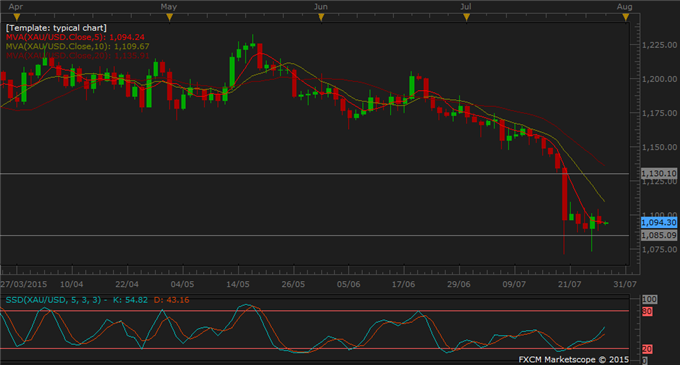 An 8.5 percent drop in Chinese stocks on Monday led to widespread risk aversion and a slump in commodities amid fears of a collapse in demand. Oil and copper lowered, with the latter hitting a six-year low. The Bloomberg Commodity Index fell 0.2 percent to the lowest since 2002.

After stock exchange close, Chinese governmental agencies issued statements assuring that they will continue to stabilise the market and prevent systemic risk. Consequently, commodities led by copper have made some recovery in morning Asia trade. The Shanghai Composite and other Chinese indices continue to impact market sentiment, and commodities will likely take cue from any directional moves there.

Copper gained 0.5 percent in morning Asia trade together with most industrial metals and is rising up to 5-day moving average at 2.380. Copper lost 19.9 percent from its high on May 5 through to Monday close, amid signs of a downtrend in the long-term horizon that stemmed from weak global growth. Any upcoming rallies prompted by a stock market recovery would likely incur more copper selling.

Brent oil lapsed into a bear market with nearly a 1 percent fall in the Asian morning, after it fell to the lowest since March in yesterday’s session. WTI oil is lingering above various March support levels starting at 47. Modest recovery in oil may materialise alongside other commodities and China’s stock market today. However rising OPEC and U.S. supplies, prospects of Iranian oil, and threats of flagging demand keep a global glut in the forefront.

*A bear market is roughly defined as a 20 percent drop from highs. Both WTI and Brent crude have fallen by about 20 percent in the last six weeks.

Gold stayed flat in Asia as the market awaits clues on a U.S. interest rate rise with the Federal Reserve policy makers scheduled to meet on Tuesday-Wednesday and GDP figure slated for Wednesday. While this consolidation persists, gold would likely stay above a critical support level at 1085.

GOLD TECHNICAL ANALYSIS – Gold held steady in a range above a critical support level at 1085. Current signal of upward momentum thwarts further declines as gold consolidates, following a Jun-July downtrend. However dips are not ruled out given recent high volatility and event risks from the U.S. FOMC meeting and GDP this week.

COPPER TECHNICAL ANALYSIS – Copper is extending higher towards 5-day moving average at 2.380. A break of that resistance level would indicate further consolidations coming, with a floor around 2.33. A support level for intraday price action is yesterday’s low at 2.3360. 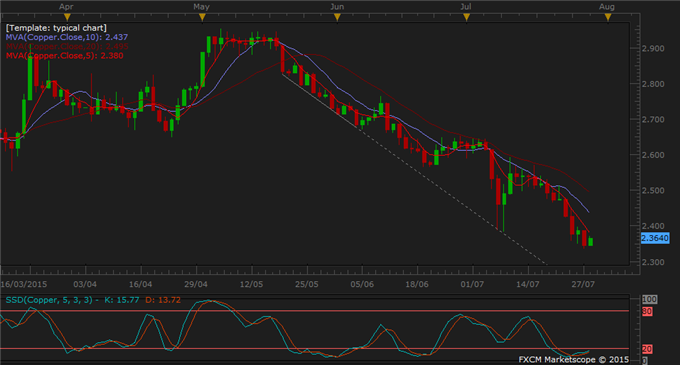 CRUDE OIL TECHNICAL ANALYSIS – Downtrend signal is clear in WTI oil and there is plenty of room for lower moves as prices stay well above the next support level at 42. Intraday prices lean to the upside, therefore oil bears may watch out for rallies to go short. Resistance level is currently 5-day moving average at 48. 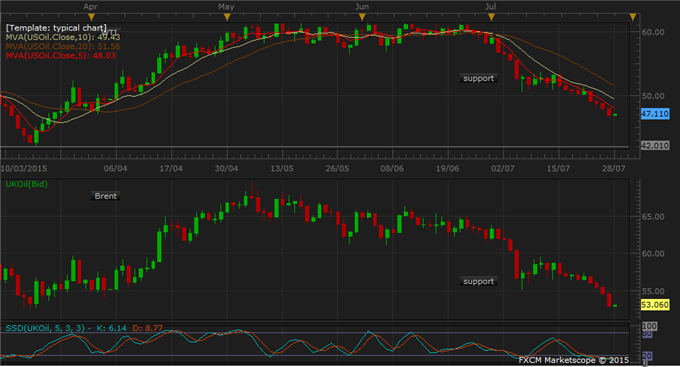