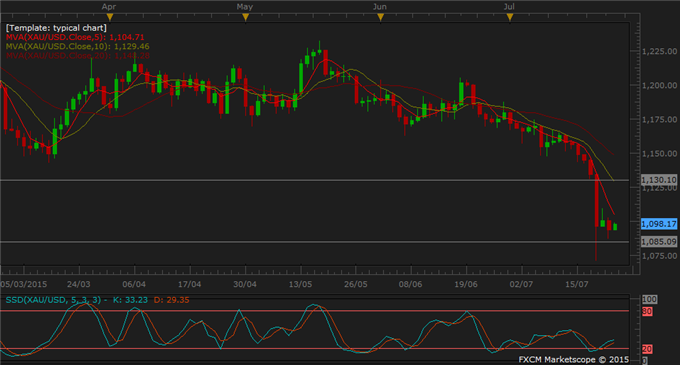 Supply-demand drivers of commodities came to the forefront as oil crashed through $50 big level, copper fell to the lowest since July 8, and gold lowered to test a support level at 1085. The US dollar rose due to positive home sales data and fixed income demand, adding downside pressure on commodity prices.

WTI crude oil crashed below $50 mark, a multi-month support level since the March-May climb. The 3.3 percent fall in price came after the US Energy Information Administration reported a weekly rise in US inventories instead of a drop as previously expected. This echoed yesterday’s surplus report by the industry-funded American Petroleum Institute and further affirmed a US supply glut.

Bearish oil prices will likely persist in the near term and have led to a widening in WTI-Brent spread to the largest level since May. WTI oil lost almost 20 percent in the past six weeks while American supplies remain almost 100 million barrels above the five-year seasonal average.

An overnight drop in copper prices dragged down the rest of the industrial metal complex, after London Mercantile Exchange reported that copper demand was at the lowest since March 2013. Data showed that consumption has dried up whereas stockpiles have doubled in the past year. This was partially caused by a deflation in production costs that boosted copper supply.

Demand for copper from China is projected to recover somewhat after the latest stock rout, however the country’s shift from an industry-based to a service-based economy underlines downside risk in copper.

Gold hovered above 1085 level in morning Asia trade for a third day although short positions remained popular. Overnight, US existing home sales data was released at the highest level since 2007 and hinted at a recovery in the housing market that would support interest rate hike decision. The world’s biggest exchange-traded fund for gold, SPDR Gold Shares, fell to the lowest level since 2008 on Wednesday. Looking ahead, any bullion rally up to the 5-day moving average at 1104.6 may attract more selling interests.

GOLD TECHNICAL ANALYSIS – Gold has persistently held above 1085 support level for three sessions, despite a downtrend signal from moving averages. The bears had better wait for a clean break before entering short positions. Prolonged price action in this area may lead to a consolidation, especially in the absence of fundamental drivers.

COPPER TECHNICAL ANALYSIS – As downtrend signal resumed in copper prices, the bears may look to place shorts with stop loss trailing 10-day moving average at 2.495. Momentum has waned after yesterday’s sharp fall, leaving room for some short-lived recovery during the session. Intraday resistance level is found at 2.4540, the top of this newly establish range. 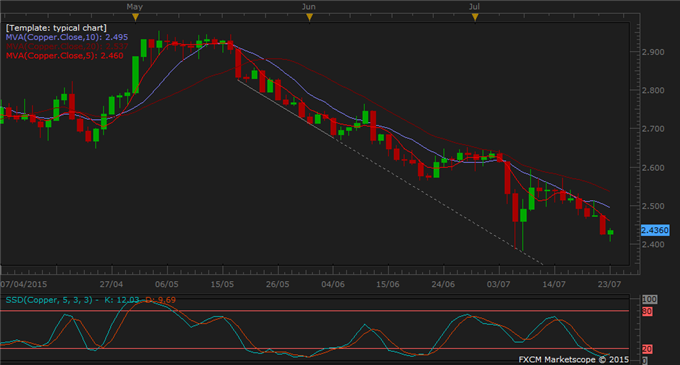 CRUDE OIL TECHNICAL ANALYSIS – WTI oil has been flat in the Asian morning after yesterday’s sharp fall below 61.8% Fibo and three-month support level at 50. Momentum is winding down today hence no big moves are expected. The next few sessions are critical to future direction, whether prices make a clean break below this level or return above head for a consolidation. The bears may find short opportunities at any rally and subsequent failure to break through 50. 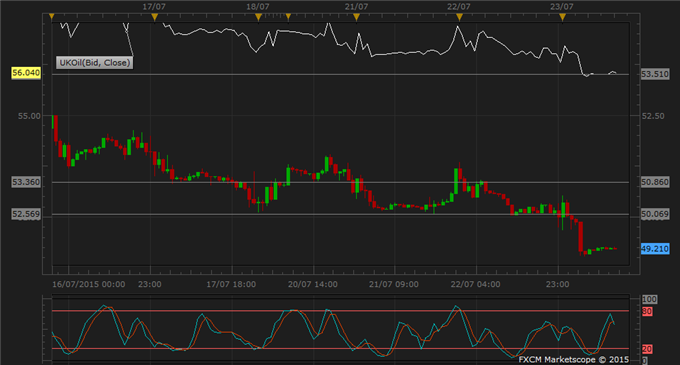