The US Dollar index lingered at a three-month high in morning Asia trade and US Treasury yields rose in anticipation of a higher interest rate as Greek situation had stabilized. On Monday, St. Louis Fed chief James Bullard told Fox Business network that there was a higher than 50 percent chance for a rate rise in September.

Gold steadied today after falling more than 4 percent to a five-year low yesterday. Bullion has edged up 0.6 percent on the day to $1103 an ounce as market perceived yesterday’s sell-off on Shanghai Exchange a one-off event. However long term prospect for gold remains gloomy as higher interest rate becomes the dominant driver. Market sentiment focused on the downside withbroad outflows seen in exchange-traded-products that are linked to precious metals.

Crude oil prices also stabilised in Asia morning, amid a week-long decline due to a stronger greenback and anxiety over supply glut. WTI oil lost 0.42 percent on the day to $50.25 a barrel, although it still hovered over a support level of 61.8% Fibonacci at 49.86. Price volatility will likely pick up later in the session due to activities on the last trading day of August futures contract.

Supply concern looms as Iran’s OPEC governor is reported to be in discussions with his counterparts about the country’s additional oil exports once sanctions are removed.

Copper gained during Asia morning after hitting a two-week low in yesterday’s trade. The summer corporate slumber leaves commodity prices vulnerable to macro developments. Copper has suffered from the strength in US dollar and Shanghai brokers are reported by Bloomberg to switch to short bets after last week’s long positions.

Upside support for copper comes from improvements in China as home prices rose in June for a second straight month and the country’s securities regulator re-affirmed its commitment to a stock market recovery.

GOLD TECHNICAL ANALYSIS – A firm downtrend is seen in moving average signal although a repeat of yesterday’s plunge is unlikely. Gold prices have conformed below a support-turn-resistance level at 1130.1 that overlaps with 5-day moving average. Daily momentum signals are poised for an upward bounce and any rally to this new resistance level would provide the bears with opportunity to go shorts 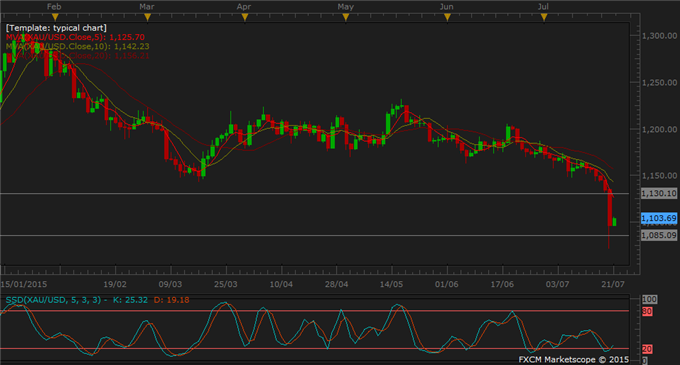 COPPER TECHNICAL ANALYSIS – Copper has rebounded during the Asian morning and is heading towards a two-day high at 2.5048. The 2.4620-5048 range will likely capture copper prices today after last week’s drop from the 2.50s region. Range traders may consider bets at any rally near the upper bound of this range, as intraday momentum signals have nearly peaked. 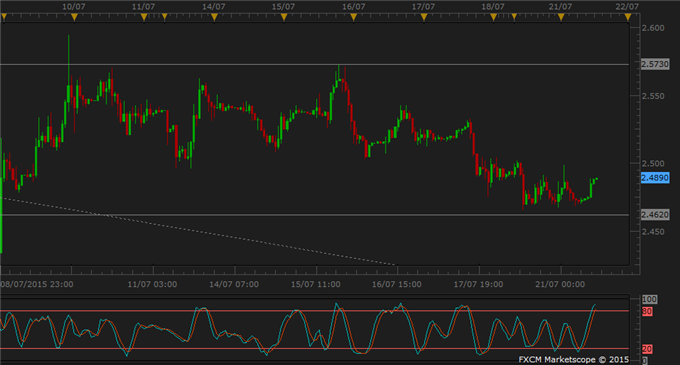 CRUDE OIL TECHNICAL ANALYSIS – WTI oil stays flat above a support level of 61.8% Fibo at 49.86 on a third day with no clear hint of an imminent break. Recent price action seems to indicate another correction is forming at this new level, rather than a prompt decline. This provides a range trade opportunity for long positions targeting the 50% Fibo at 52.28. 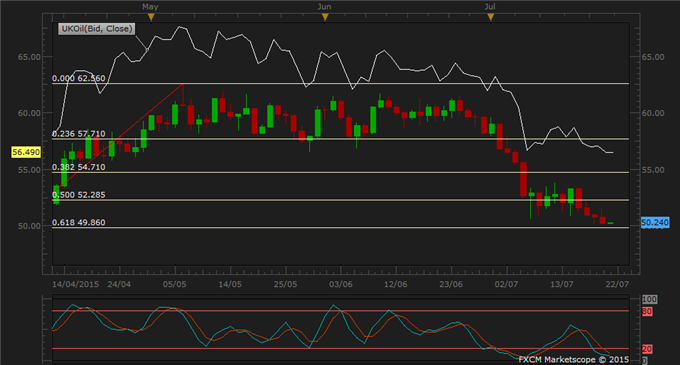