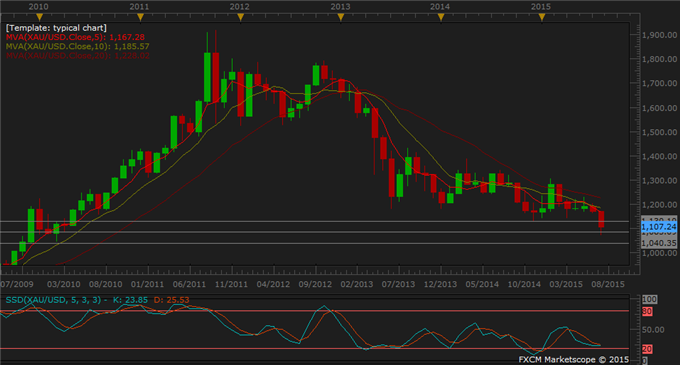 Gold Slumps As Risk Eases and US Rate Hike in Focus

Commodity prices are pressured by a stronger US dollar as investors look to higher interest rates from the Federal Reserve while risk from Greece and China eases. A string of positive US data has brought the attention back to rate hike which helped to lift the US dollar index to its highest level since April and send gold on a nose-dive towards levels in 2010.

Provision for a three-year Greek bailout, an EU’s bridging loan, and ECB’s extended emergency lending were all approved by the weekend. In China, the Shanghai Composite index holds on to its gains above the 4000 mark.

Gold has dropped nearly $50 or 2.30 percent in the few hours leading to noon time in Asia. The fall was exacerbated by heavy selling spotted on Shanghai gold exchange as reported by Bloomberg, although the incident may be an isolated case of speculation. Haven demand for gold continues to fade and thin market on a Japanese holiday worsen the moves. CFTC data on Friday showed that money managers are holding the smallest net-bullish bet on gold since the agency started recording its data in 2006.

On Friday, China broke a six-year silence to reveal its gold reserves which have seen a 60 percent jump since 2009. Although this was met with muted reaction in market.

WTI oil has reversed the losses in Asia morning trade as Saudi Arabian exports data fell to the lowest in five months and US rig count showed the first decline in three weeks. Saudi Arabia’s official data for crude’s daily shipments showed a decline in May despite a record high output, as the world’s biggest crude exporter is building up its refineries. Baker Hughes reported that US energy firms cut seven oil rigs last week.

Speculation on Iran’s oil exports continues to cap the upside in prices, with Bloomberg data stating that output restoration will be faster than previously expected. The Brent-WTI spread has receded from last week’s high as the UK's largest oilfield began ramping up on Friday after an outage on Wednesday.

Copper lowers in Asia today after a third straight week of loss due to a jump in global inventories. Stockpiles recorded by exchanges in London, Shanghai and New York rose 3.8 percent last week, the biggest advance since March 13. The outlook for prices remains mixed as this drop is offset somewhat by demand optimism from China's stronger-than-expected second quarter GDP and an increase in property prices last week. CFTC recorded a build-up of bullish bet in copper which may lead to a short-term bounce.

GOLD TECHNICAL ANALYSIS – Gold broke support level at 1142.59 on Friday and is testing a support level at 1085 today, with another support coming close at 1040.3. Moving averages are forming downtrend signal in both the weekly and monthly charts (picture). Any rally of gold prices up to the weekly 20-day moving average at 1181.3 would present an opportunity to sell.

COPPER TECHNICAL ANALYSIS – Copper prices crashed from the 2.49 handle to the 2.46 handle around noon time Asia and paused ahead a support level at 2.4620. Intraday price action may rebound up to today’s high at 2.5050, however topside moves are limited by downward momentum signals. The bears may sell at rally to this level for range trade. 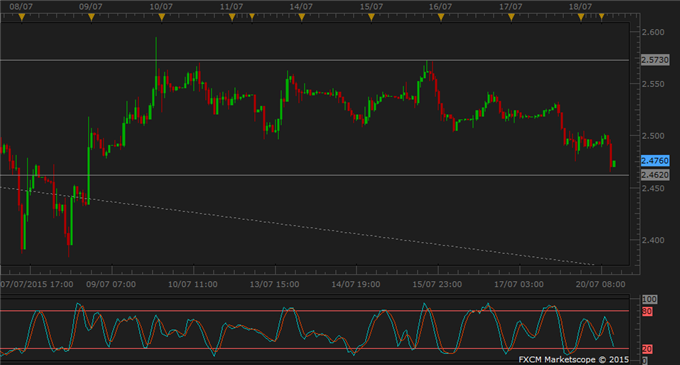 CRUDE OIL TECHNICAL ANALYSIS – After touching a support level of 61.8% Fibo at 49.86 on Friday, WTI prices have retraced the losses today. Price action already passed the previous high of 51.21 and is currently rising towards the 50% Fibo at 52.28. The 49.86-52.28 range will likely cap today’s movements in WTI oil. 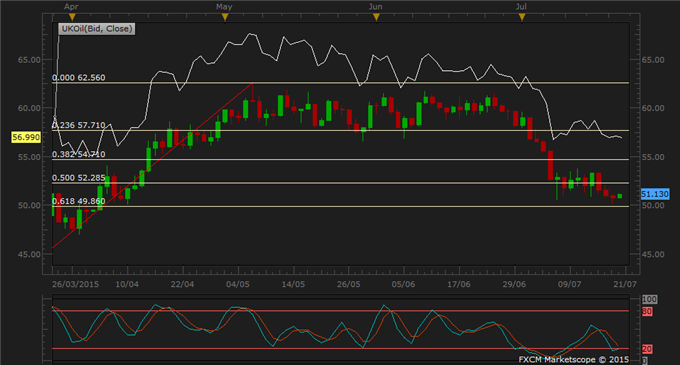