The meetings of Eurozone leaders on Sunday and Monday ended with a final proposal drafted and bridge financing being prepared for Greece. Grexit risk seems to have diminished at least until this Wednesday’s deadline for a legislature of Greek reforms.

In Asia, China stocks rise for a fifth day today and hundreds of frozen stocks have resumed trading since yesterday. The Shanghai Composite index has gained 0.84 percent today and crossed the critical 4000 level, further averting the risk of a renewed sell-off.

While risks in Greece and China seem to have declined, market’s focus has shifted back to the timing and pacing of a US interest rate hike. A resolution to the Greek crisis would allow the Federal Open Market Committee to downplay concerns on global economic conditions and focus on positive economic momentum in the US. Expectations of a rate hike will lift the US dollar against other currencies which will render a reverse effect on commodity prices.

Gold dropped yesterday as well as today’s Asia morning session after news of a deal between Greece and its creditors thwarted safe haven demand and shifted focus to the pending US rate rise. Gold has fallen 2.3 percent this year since the Federal Reserve signalled a plan to boost interest rates, despite demand support during the Greek crisis. Gold does not produce interest or returns like other financial assets and therefore will likely lose its appeal in an environment of higher interest rates and asset returns.

WTI Oil has dropped 1 percent on a second day of declines as word came out that a nuclear deal with Iran is nearing completion. This deal would allow Iran to increase crude exports in a market that is already flushed with supply, and heighten downside price risk. Yesterday, Saudi Arabia reported a record June output rise that beat a previous record in the 1980s. Looking ahead, the bears may be watching out for a firm support level at 49.68 on the way down (the 61.8% Fibo of March-May rise).

Industrial metals rebounded after a Greek agreement averted demand risk in raw materials, although they declined again today in anticipation of a weak China’s quarterly GDP slated on Wednesday. Growth in the second quarter is expected to fall short of the 7 percent recorded in the first quarter. Copper prices have been volatile today and swung down 0.14 percent earlier this morning. Pressures on both ends effectively retain copper in a range with 20-day moving average at top.

GOLD TECHNICAL ANALYSIS – Price action in gold has been rather muted during Asia trade after it broke an intraday support level yesterday. Momentum signals are touching on the lower bound of their range, a sign that the fall may lose pace. The range formed by multi-month support at 1147.1 and weekly resistance at 1167.7 will likely prevail today and provide opportunity for range trades. 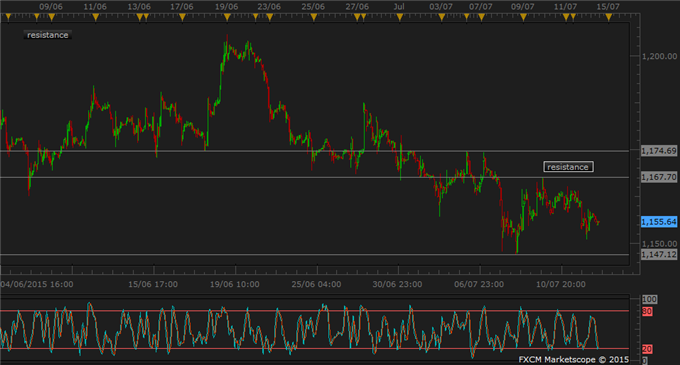 COPPER TECHNICAL ANALYSIS – Copper has swung between gains and losses today in Asia and all signs point to an extension of the current correction after it failed to break above 20-day moving average. The 20 DMA still provides an unchallenged resistance level, currently at 2.582. The bears may sell at any rally up to this resistance level, provided no new technical developments materialise. 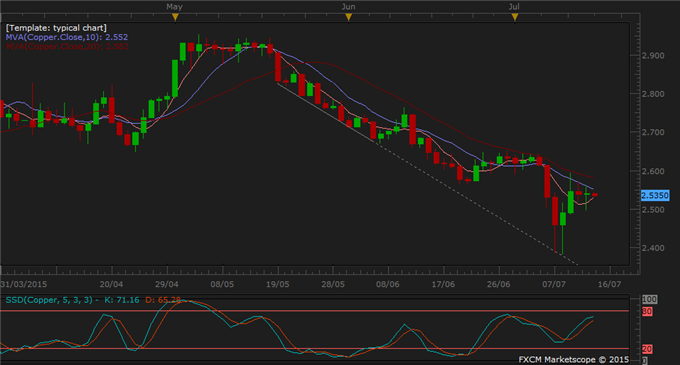 CRUDE OIL TECHNICAL ANALYSIS – WTI oil sets to test the previous low of 56.80 today, on a second day of loss. Momentum signals are rather subdued and both the bears and bulls should take caution before entering positions. Especially the bears, while prices hover above a multi-month support level at 55.08. A break of this support would be a better sign for further decline. 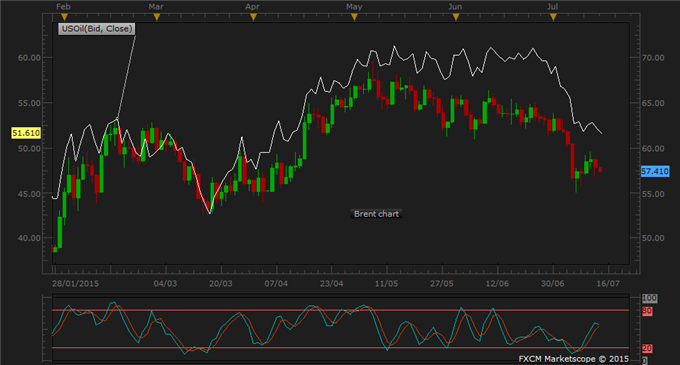