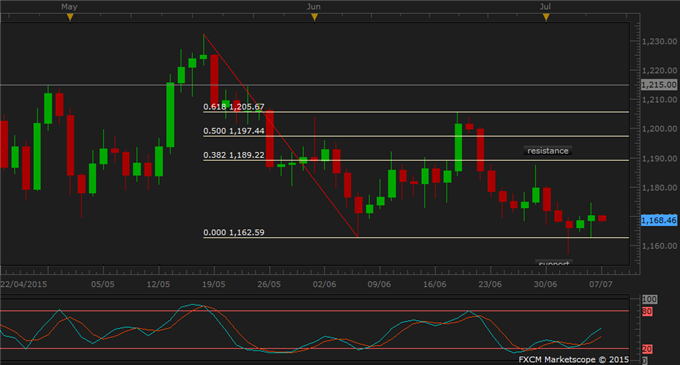 Oil Recovers in Asia Trade Ahead of European Leaders Meeting

Crude oil prices are attempting to recover in Asia morning trade after suffering the biggest loss in five months yesterday. Anxiety about economic stability in Europe and China coupled with the prospect of additional supplies from Iran induced a 7.7 percent loss in WTI and 6.3 percent loss in Brent overnight. As market players await revived Greek debt negotiations at Tuesday’s Eurogroup meeting, the drop in prices paused and a rebound began at Asian open. WTI oil has put on nearly 0.9 percent and Brent has gained back over 1 percent.

While worries of a contagion from the Greek crisis seemed to fade, the full effect of China’s measures to stem the stock exchange slump and spill-over affects to its economy remain to be seen. The deleveraging process continues in China’s equity market after the Shanghai exchange recorded a 29 percent drop in June.

Gold has fallen in Asia morning trade after a 0.1 percent rise yesterday, as the US Dollar and the outlook for higher US interest rates continue to provide downward pressure. Prior safe haven flows into gold have moderated, perhaps as contagion risk from Greece into other peripheral countries was discounted. This has been shown in stabilising yield spreads between Italian/Portuguese and German bonds, both of which are trading much lower than the peaksrecording during the last Greek debt crisis episode. Gold will look to US Dollar movements following the release of minutes from June’s Federal Reserve policy meeting for direction clues. The Fed’s board will also hold a closed-door meeting planning Chair Yellen’s semi-annual testimony to Congress scheduled for July 15-16, but the absence of follow-on commentary may make this a non-event for markets.

Copper has stayed flat today awaiting the outcome of Tuesday’s meeting among European leaders. Copper saw the biggest loss since January at 2.9 percent yesterday. Prices are still bogged down by big swings in China’s stock market that threaten to spill over to economic activity at large. The Shanghai Composite Index has lost a further 3.6 percent today as the interventions announced on Monday have not deterred the sell-off. These measures included a suspension in IPOs and committed inflows from 21 brokerages. Market players have deemed these measures rather short-term in nature and thereby insufficient to address the deleveraging issue. Copper prices are down 11 percent so far this year.

GOLD TECHNICAL ANALYSIS – Gold has been sold since Asia open despite an upward bias in momentum signals. This rebound in momentum will likely help to contain further losses and keep gold above support at 1162.50 for now. Bullion remains volatile at this close proximity to support and as such does not warrant range trades. A break of support would open up the 1150 region below, followed by the next support level at 1142.

COPPER TECHNICAL ANALYSIS – Copper has stayed flat in Asia trade after yesterday’s fall broke through a support and touched down to the 2.5050 level. Downward pressure persists and there is still room for lower extensions all the way towards another support at 2.4190. A return of the lower-low pattern in the next few sessions would provide a good sign for the bears. Otherwise consolidation will likely continue right above support levels. 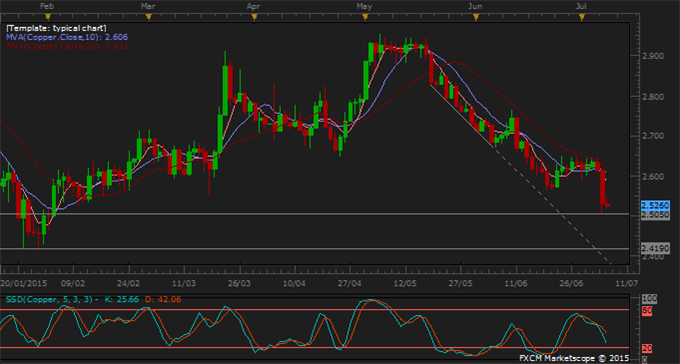 CRUDE OIL TECHNICAL ANALYSIS – WTI oil is hovering over 50% Fibo support at 52.28 today after its descent from the 55.50 region in yesterday’s trade. Downward momentum looks to be waning. This would help to hold prices above support level. The bears may wait for a break of this level and subsequent tests of the 61.8% Fibo level at 49.86 before considering short positions. 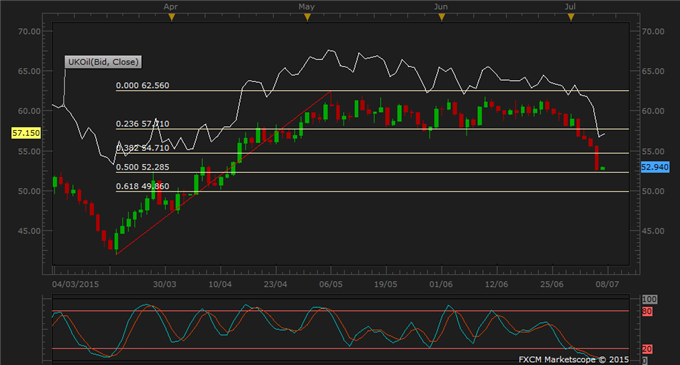