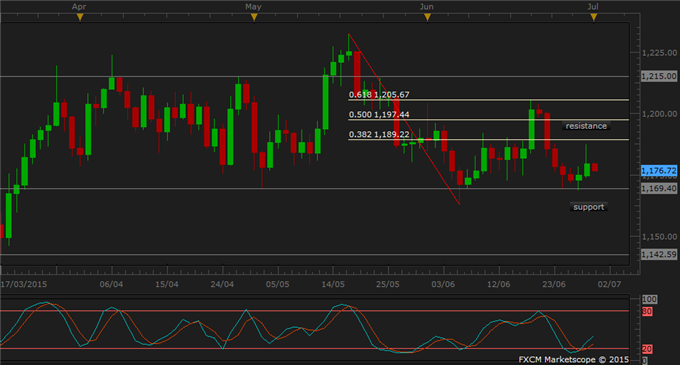 Crude oil prices consolidated in yesterday and today sessions after four days of decline as market players calmed down about the implications of the Greek crisis while a deal with Iran was delayed. In Europe, all eyes are on the upcoming Greek referendum scheduled for July 5 where its people will vote to accept or reject the creditors’ proposal. This helped to put the fire out of the sell-off in risk assets including oil due to risk aversion. Yesterday's deadline for nuclear talks between Iran and the six Western countries have been extended to July 7, while political momentum still points toward a deal. Questions remain on when the sanctions on Iran’s oil exports may be lifted and how much of its output would be built up.

Crude oil ended the first half of this year with a gain of around 11 percent, including a 25 percent increase during the second quarter that marked the largest single-quarter percentage gain since 2009.

Safe haven demand for gold returned to the table in the face of a prolonged progression towards a resolution to the Greek debt crisis. Greece missed a debt repayment deadline to the IMF on Tuesday June 30 as political leaders continue to discuss short- and long-term debt relief. Gold prices briefly dipped past support yesterday but have since retraced back above that level. Nevertheless, upside potential is limited by a recent appreciation in the US Dollar. Long-term demand is also dulled by an impending interest rate rise by the Federal Reserve, which would make bullion less attractive as an investment asset.

Copper prices bore the weight of global economic uncertainty and contradicting Chinese manufacturing PMI readings in morning Asia trade. Prices declined for a third day and are heading towards the multi-month low at 2.5520. China’s official PMI reading came in at 50.2, a reading still in the expansion zone but lower than the 50.3 number expected. On the other hand, HSBC’s Chinese Manufacturing PMI came out at 49.4, an outcome still in the contraction zone but higher than May print of 49.2. These numbers cast further doubt on China’s economic growth, which is correlated with copper demand.

GOLD TECHNICAL ANALYSIS – Gold prices declined and currently look to be in consolidation after yesterday’s price action failed to test resistance at the 1189.20 level. An immediate support level is found at yesterday’s low of 1166.7. The momentum for upside extension remains weak, hence a test of resistance is unlikely during today session. Gold bulls may watch out for opportunities to trade the range with long positions.

COPPER TECHNICAL ANALYSIS – Copper prices have retreated from Monday’s high and so far seem to be forming a correction lower. Momentum signals indicate an extension lower intra-day towards yesterday’s low and a two-week double bottom at 2.5890. Below that, support is found at 2.5640 which was also a double bottom in mid-June. There is not yet a return of downtrend signal to justify short positions, although the bears may take advantage of the recent fall via range trade. 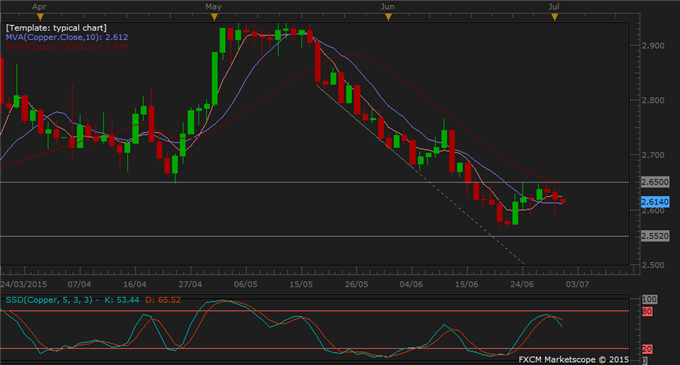 CRUDE OIL TECHNICAL ANALYSIS – WTI crude oil prices halted ahead of the 23.6% Fibonacci support level at 57.71 yesterday. Today’s prices are bracing for lower extensions ahead of this support level, with the multi-month low at 56.49 coming right below that. A clean break of support would be necessary for oil prices to get out of the recent range and pave the way for a deeper reversal after the March-May rise. 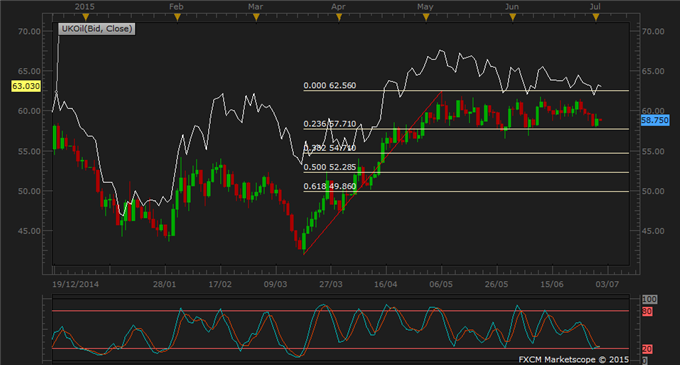