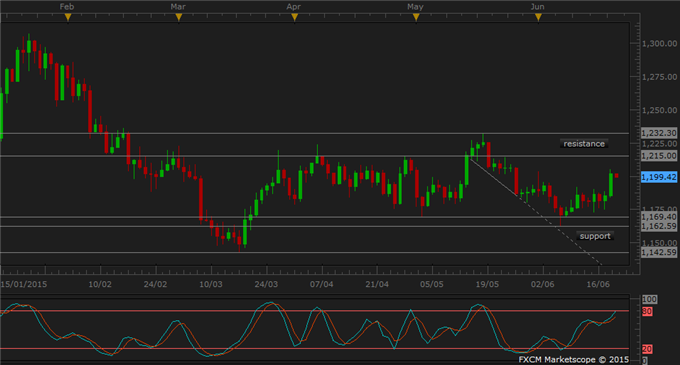 Gold surged to 1205.60, highest level this month, on the back of safe-haven interest after a Eurogroup meeting ended without a deal on Greek funding. The ECB is planning an emergency aid call on Friday while Eurozone finance ministers will be joined by their EU counterparts for another meeting. A further an emergency summit is scheduled for Monday. Though an actual exit out of the Euro is opposed by both the Greek people (via polls) and European leaders, the current deadlock signals prolonged and painful negotiations ahead, with a possible extension of the June 30 deadline on the horizon. This was great news for bullion as it rebounded from support at1169.40, although heightened volatility makes it hard to gauge future direction. Gold bulls should stay mindful of ensuing events and price developments.

Copper and base metals will likely feel the seasonal impact of scheduled plant closings in the third quarter. Price action will depend on whether the market perceives this as a lasting or a temporary output cut. Copper is ranging for a third straight day right above support at 2.5920 (March low), with the chance for a break seemingly diminished. Long term pressure is still on the downside as mining investment comes into question and weighs on prices. Wood Mackenzie reported an average of 400-900kt will be dropped from production every year until 2021. The expected drop may have a stabilising effect on prices in the long run but US Dollar volatility continues to be the leading driver in the short term.

Little intra-day action is expected in crude oil today. The only level to watch is Brent’s support trend line that has held so far this week (currently at 62.33). Movements in both WTI and Brent have scaled down in magnitude in Asian morning after overnight volatility. High refinery margins this side of the summer will provide a baseline on crude oil prices. The WTI forward curve has flattened out in the near term through December and subsequently steepens in 2016, signalling an expected fall in prices for the rest of this year.

Gasoline has shifted from contago to backwardation until December 2016, showing a tightening market, although natural gas remains in contango. Natural gas prices picked up earlier this month in a reversal from the May downtrend, yet gave back ground this week and are now poised to complete a third consecutive day of losses.

GOLD TECHNICAL ANALYSIS – The sudden building of upward momentum produced a break above gold’s recent range top and lifted prices closer to resistance at 1215 (April 28-29 highs). After this big swing, Asian prices are expected to be subdued and in the proximity of familiar barriers today. Monday opening levels would provide better indication for next week’s trades, with a short term bias to the topside.

COPPER TECHNICAL ANALYSIS – Copper is on a third day of sideways movement above the 2.5920 support level. A clear hint of an oncoming rebound from support or visible upward momentum is missing for now, so the May-June down move remains in play for now. If today ends without a close below support, copper will likely continue to track sideways in Monday’s Asia session. 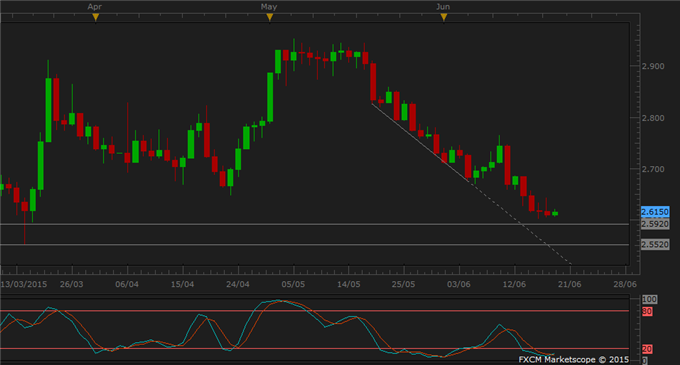 CRUDE OIL TECHNICAL ANALYSIS – The hourly chart of WTI shows intra-day opportunities to trade the range with tight stops at either bound of the 56.49-62.56 zone, which has held since early May. Price action is muted in Brent while it is parking on multi-month trend linesupport, currently at 62.74. Monday opening prices will shed light on next week’s theme: a continuous test of support or a return to the topside ahead of resistance at 69.60. The next level of support is at 60.92, the 5 June low. 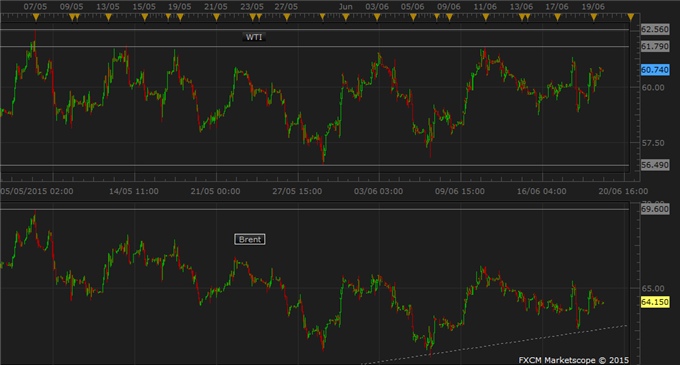