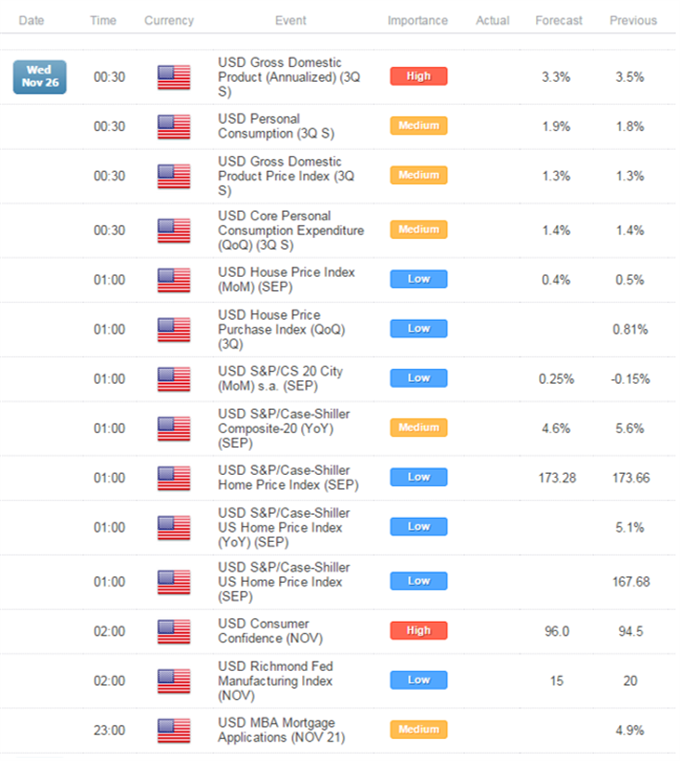 Precious Metals Exposed To Greenback Gains On Top-Tier US Data

Crude oil witnessed a rocky start to the week with the WTI benchmark off by 1.28% for the session. Global supply glut concerns were fanned by reports that several OPEC members would be excluded from production cuts. This comes ahead of a scheduled meeting amongst the petroleum producers later this week. While negative supply side cues remain, the crude benchmarks could continue to remain under pressure.

Meanwhile the precious metals witnessed a mixed session as their US Dollar counterpart drifted sideways amid a void of major US data. Looking to the session ahead, the greenback may take some guidance from revised Q3 GDP and Consumer Confidence figures. Given the generally positive sentiment towards the USD at present, it would likely take a material downside surprise to turn the tide against the reserve currency. This in turn could leave gold and silver exposed.

Crude remains capped below the 77.00 barrier with indications of a downtrend persisting (descending trendline, 20 SMA). This leaves the downside risks centered on the late September 2010 low at 72.70. A daily close above 77.00 would be required to warn of a base for the commodity.

Gold remains at a crossroads as trend indicators warn of building upside momentum (20 SMA and ROC). Yet it is still capped below key resistance at 1,208 (also the 61.8% Fib.). This leaves a clearer setup desired to offer a more concrete technical bias.

Silver has cleared two barriers; the 20 SMA and descending trendline, which together had kept the commodity capped for several months. Yet it is struggling to push past the 50% Fib., which in turn casts doubt on a further advance. A close above the nearby hurdle would be required to turn the spotlight higher towards the 17.70 ceiling.

Silver: Encounters The Next Big Hurdle

Copper has continued its choppy impulsive swings under trendline resistance. Caution is suggested when adopting fresh positioning given the commodity’s tendency towards volatility over recent months. Further, trend indicators have proven prone to rapidly changing direction, suggesting a lack of strong conviction from traders.

Palladium has leapt over the 23.6% Fib. and 20 SMA, suggesting that the bears have lost their grip on the precious metal. While this is a bullish signal, some caution is required when looking to adopt fresh positioning. This is given palladium’s disposition towards whipsaws in recent trade.

Platinum continues to struggle to lift off from the 1,187 floor despite a Bullish Engulfing pattern lying in its wake. This the bears are still unprepared to relinquish their grip on the metal and may continue to pull it towards its recent lows.