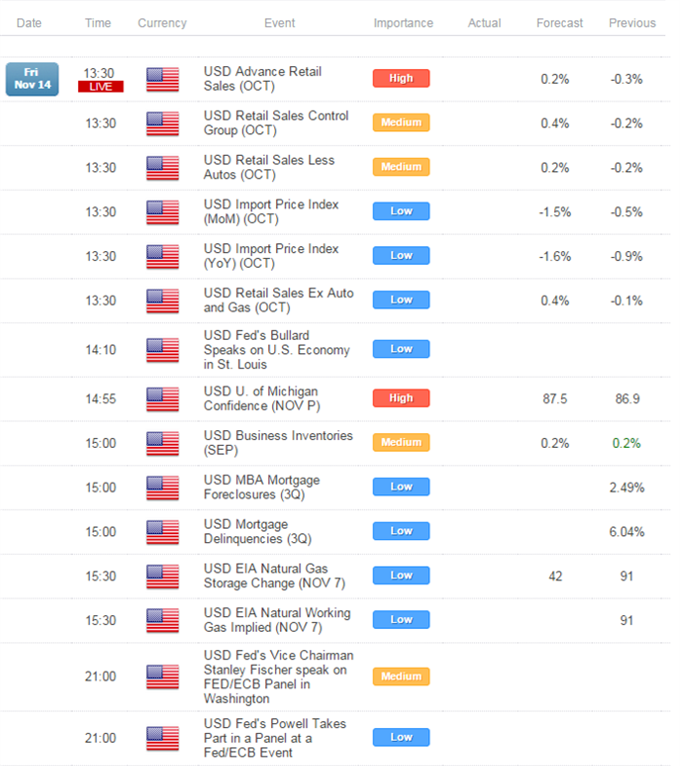 Crude oil benchmarks plummeted on Thursday with WTI sliding by over 3 percent to a fresh 3 year low. Global supply glut concerns continue to weigh on the commodity and were likely bolstered by the latest round of DOE inventories figures. Supplies at Cushing rose by their highest since August, and total production climbed above the 9 million barrels a day mark for the first time since 1985. Over the session ahead there is likely a high hurdle for strong US data to deliver offsetting positive demand side cues. This could see the crude complex remain under pressure.

Natural gas also suffered significant declines of more than 4 percent over the most recent session. Easing US cold snap concerns continue to drag the weather-sensitive commodity lower. Looking ahead the EIA is set to release weekly storage data. Another injection print above the seasonal average could keep expectations for ample supplies alive, and weigh on the energy commodity.

Meanwhile gold and silver continue to tread water as a void of major US data leaves their pricing currency, the USD, lacking guidance. A strong set of upcoming US Advance Retail Sales and consumer sentiment figures could stand to reinvigorate the US Dollar bulls. Which in turn, could drag the precious metals lower. See today’s general daily briefing for further insights on the USD and upcoming data.

Finally turning to the base metals; copper slumped by over 1 percent on Thursday with newswires citing disappointing Chinese economic data as a potential catalyst. However, intraday price action reveals the declines occurred well after the release of the figures. This suggests other factors may have been at play with some sources citing traders’ need to close copper longs to cover positions in crude.

Crude has finally breached the critical 77 barrier and achieved the 74.70 target offered in recent reports. Trend indicators continue to point downward (descending trendline, 20 SMA, ROC). This suggests a potential run on the late September 2010 low near 72.70.

Gold’s downward momentum appears to have stalled, yet in the absence of more positive cues, the risks remain skewed lower. This leaves the spotlight on the mid-April ’10 low near 1,123.5.

Silver continues to consolidate, leaving a string of Dojisin its path. Yet at the same time the metal is lacking bullish technical cues. With signs of a short-term downtrend intact (20 SMA, ROC) the focus remains on the 2010 low near 14.65.

Copper has retreated from the 23.6% Fib, turning to the focus on support at 2.96. Yet caution is suggested when adopting fresh positioning given the commodity’s tendency towards volatility over recent months. Further, trend indicators have proven prone to rapidly changing direction, suggesting a lack of strong conviction from traders.

Palladium may be witnessing the beginnings of a greater retreat towards its recent lows near 735. Respect of the 23.6% Fib. and 20 SMA are suggestive that the bears are slowly strengthening their grip on the metal. However, some caution is suggested when looking to adopt fresh positioning. This is given palladium’s disposition towards whipsaws in recent trade.

Platinum remains inches away from the critical 1,187 barrier as a Dojiformation suggests reluctance from the bears to lead the metal lower. With trend indicators pointing downward (20 SMA, descending trendline) a breakout could pave the way for a push towards the July ’09 low near 1,101.