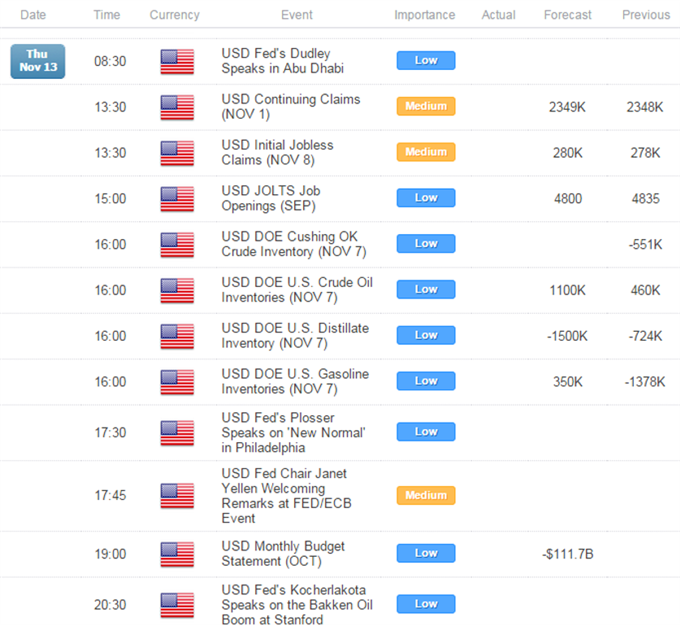 Crude At Risk On Inventories, Gold Rudderless Amid Light US Docket

Crude oil benchmarks saw renewed selling pressure on Wednesday as global supply glut concerns continue to fester. Looking to the session ahead the DOE’s Weekly Petroleum Status Report is tipped to reveal the sixth straight weekly build for total crude stocks. Further, the latest figures from the government agency reflected a climb in US crude production to its highest since 1985. Together the data may do little to alleviate anticipation over ample supplies, which could continue to weigh on WTI.

Also in the energy space; natural gas extended its recent declines with speculation over a US cold snap easing. The release of weekly storage data for the commodity has been delayed until Friday, due to Veteran’s Day earlier in the week. With the upcoming injection figures tipped to remain well-above the seasonal average, expectations over abundant supplies may continue to drag prices lower.

Meanwhile, the precious metals continued their consolidation in recent trade with a lack of key US data to guide their US Dollar counterpart. A similar void of major US economic releases over the session ahead may leave the greenback bulls lacking inspiration and could afford gold and silver some further breathing room. Yet looking into the end of the week; strong US Advance Retail Sales and Consumer Confidence data is needed to more substantially reinvigorate the US Dollar - and pile renewed pressure on gold.

Finally, copper edged lower on Wednesday, yet is relatively flat for the week. Data from the base metal’s largest consumer, China, is on the docket over the session ahead. Yet the commodity has been relatively despondent to recent releases from the Asian giant. This suggests a significant deviation from expectations would be required to shift demand bets and deliver an impact on the base metal.

Crude remains at a critical juncture as it awaits a more significant daily close below the 77 barrier. While the proximity to the key level could see some profit-taking, the scope for a recovery may be limited by nearby selling pressure at the 80.00 handle. Further, trend indicators continue to point downward (descending trendline, 20 SMA, ROC). Downside risks are skewed to the 2011 low near 74.70.

Gold’s downward momentum appears to have stalled, yet in the absence of more positive cues, the risks remain skewed lower. This leaves the spotlight on the mid-April ’10 low near 1,123.5.

Silver’s consolidation has negated a Morning Starformation on the daily, leaving the metal lacking bullish technical cues. With signs of a short-term downtrend intact (20 SMA, ROC) the focus remains on the 2010 low near 14.65.

Copper continues to consolidate with near the 23.6% Fib. While this may limit the extent of further gains, caution is suggested when adopting fresh positioning given the commodity’s tendency towards volatility over recent months. Further, trend indicators are offering few directional cues.

Palladium is lacking momentum as signaled by a Doji formation and the Rate of Change indicator wavering around the zero bound. Broader negative cues also appear to be fadingleaving a more constructive setup desired before offering a technical bias.

Platinum is inches away from the critical 1,187 barrier as a Doji formation suggests reluctance from the bears to lead the metal lower. With trend indicators pointing downward (20 SMA, descending trendline) a breakout could pave the way for a push towards the July ’09 low near 1,101.