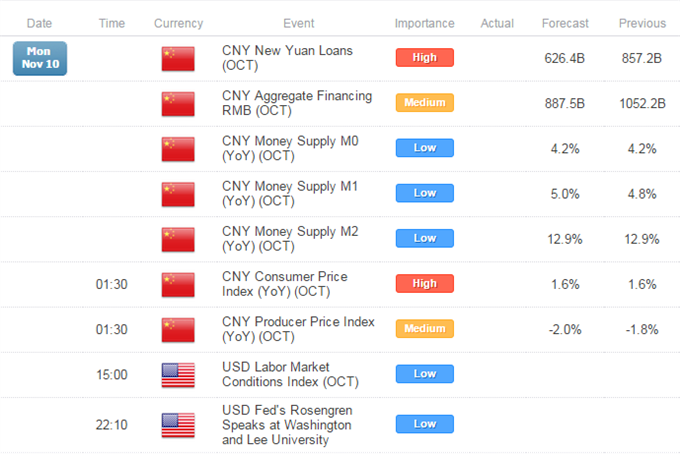 Gold Recovery At Risk As Dust Settles From Disappointing NFPs

The precious metals rebounded strongly on Friday after a disappointing headline NFPs print sent the US Dollar reeling. Several strong sessions for the greenback last week likely left it overexposed to profit-taking on a miss. Yet there were some encouraging signs in the latest figures, including a surprise slide in the unemployment rate to the lowest since 2008. This in turn is likely to leave the Fed on the path towards policy normalization, and may mean the USD’s dip is transitory. With the dust settling from Friday and a light US docket over the session ahead, the greenback bulls may be tempted to return, which could limit the extent of the precious metals’ advance.

Read more on the outlook for the USD and gold in the weekly forecast.

Meanwhile the crude oil benchmarks witnessed modest gains in the final session of the week amid reports of potential Libyan production constraints, and renewed tensions in Eastern Europe. Yet these latest developments are unlikely to hold the required strength to lift the burden of global supply glut expectations. This suggests the commodity may continue to trade heavy over the session ahead. Yet it would also be reasonable to question the prospect of another spike lower as shorts look to book profits. This in turn raises the likelihood of a short-term consolidation for WTI and Brent.

Finally, copper ended the session higher on Friday after another choppy week full of intraday whipsaws. The coming week will bring a ton of top-tier data from its largest consumer, China. However, the base metal has proven surprisingly despondent to data from the manufacturing powerhouse of-late. This includes a lackluster reaction to a deterioration in Chinese copper ore and concentrate volumes for October. This leaves the potential impact of this week’s data on the base metal as questionable.

Crude continues to whipsaw within the 77 to 80 trading band. While the proximity to the floor could see some profit-taking, the scope for a recovery may be limited by nearby selling pressure at the 80.00 handle. Further, trend indicators continue to point downward (descending trendline, 20 SMA, ROC). This leaves a close below 77 desired to open a descent to the next definitive level near the 2011 low (74.70).

Gold’s sharp rebound has left a Morning Star formation in its wake. Yet with the reversal signal lacking confirmation, and sellers sitting at 1,180 - a further advance may prove challenging. Amid a sustained presence of a short-term downtrend as indicated by the 20 SMAand ROCdownside risks remain. This leaves the spotlight on the mid-April ’10 low near 1,123.5.

Silver’s rebound is seen as corrective at this stage as signs of a short-term downtrend remain intact (20 SMA, ROC). Sellers are likely to renew their interest on a retest of trendline resistance which would turn to the focus back to the 2010 low near 14.65.

Copper continues to gyrate erratically around the 3.00 handle with the latest upswing finding selling pressure at the 23.6% Fib. While this may limit the extent of further gains, caution is suggested when adopting fresh positioning given the commodity’s tendency towards volatility over recent months.

Palladium has produced a Bullish Engulfing formation which awaits confirmation from a successive up-period to be confirmed. Until validated negative cues remain, including signs of a downtrend from the 20 and 50 SMAs. Further, sellers appear intent on capping the metal’s advance at the 23.6% Fib. near 775. This suggests a sustained recovery may prove difficult and leaves the focus on the 2014 low near 735.

Platinum has rebounded from the 1,187 target provided in recent reports. The Bullish Engulfing formation that has been left in its wake requires validation from a successive up-day. Yet even if received the scope for an advance may be capped by the 1,242 barrier overhead.

Platinum: Scope For A Recovery May Be Limited