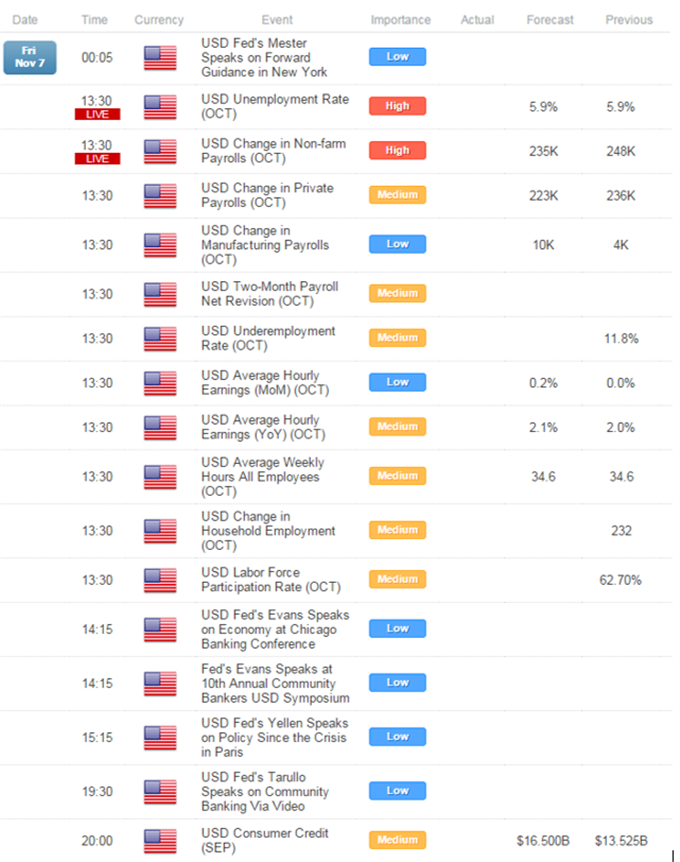 Crude oil retreated in trading on Thursday as fresh reports from OPEC producers bolstered supply swell expectations. Over the session ahead lingering supply glut concerns may continue to offset healthy economic data from crude’s largest consumer, the US. This suggests a high threshold for incoming US NFPs to bolster WTI, leaving it at the mercy of negative supply side cues.

Also in the energy space, natural gas witnessed a parabolic ascent in recent trade (+4.93%) with newswires reporting an impending US cold snap as a likely driver. This counteracted negative guidance for the commodity offered by another above-average storage injection print. With ongoing strong inventory builds the potential for further gains for gas hinges on robust demand expectations for the looming US winter.

Turning to the precious metals; gold and silver are set for a volatile session after being offered a brief reprieve in trading on Thursday. Another healthy reading from tonight’s eagerly-awaited US Non-Farm Payrolls report would likely bolster expectations for firmer Fed policy, which in turn could renew pressure on gold and silver.

Crude has once again retreated towards the critical 77.00 barrier, leaving a Hammer formation to fall flat. While the proximity to the floor could see some profit-taking, the scope for a recovery may be limited by nearby selling pressure at the 84.00 handle. Further, trend indicators continue to point downward (descending trendline, 20 SMA, ROC). This leaves a close below 77 desired to open a descent to the next definitive level near the 2011 low (74.70).

Gold has achieved the 1,158 target offered in recent reports. Despite a Doji signaling hesitation from the bears, downside risks amid a sustained presence of a short-term downtrend as indicated by the 20 SMAand ROC. This leaves the spotlight on the mid-April ’10 low near 1,123.5.

Silver remains in respect of trendline resistance alongside broader signs of a downtrend. The cut through the 15.60 target offered in recent reports casts the spotlight on the 2010 low near 14.65.

Copper is clinging to the 3.00 handle which has done little to confirm the bullish reversal signal offered by the Hammer formation on the daily. Alongside choppy trade over recent weeks a more constructive setup is desired to offer a clearer technical bias.

Palladium continues its slide below the 775.00 floor with trend indicators pointing downward. Alongside a lack of bullish reversal signals the stage may be set for a drop to the 735.00 barrier.

Platinum is within striking distance of the 1,187 target offered in recent reports. With bearish technical signals (including trend indicators) still intact, a break below the floor would be desired for fresh shorts. The next definitive target to work with is offered by the July 2009 trough near 1,101.