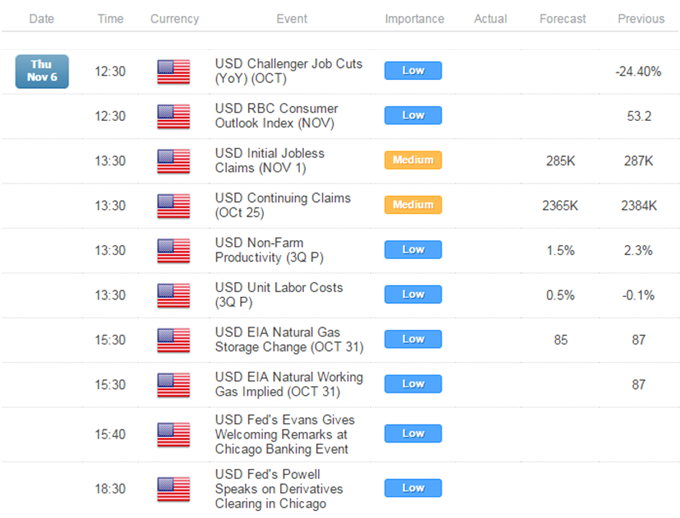 The precious metals suffered heavy losses on Wednesday with silver weaker by an astounding 5 percent at one point during the session. Broad-based gains for the greenback dragged the alternative assets lower with newswires citing the results of the US Mid-Term Elections as a driver behind the move.

US Initial Jobless claims offer medium-tier event risk for the USD over the session ahead. It would likely take a significant disappointment to the reading to shift the overwhelmingly positive sentiment towards the greenback. This is in turn leaves gold and silver potentially exposed to further weakness.

Meanwhile, the crude oil benchmarks rebounded in recent trade, which may have reflected repositioning from traders near a key technical barrier at $77.00. Media sources also noted positive leads from a lower-than-anticipated build in crude stocks for the week according to the latest DOE inventories report. However, the government agency also revealed another climb in US crude production to a multi-decade high. Alongside reports of price cuts from OPEC producers this may leave global supply glut concerns to linger, which could limit the scope for a recovery.

Also in the energy space, natural gas pared earlier gains yet still managed to finish higher by over 1 percent for the session. Anticipation over an impending US cold snap has been cited as catalyst behind the dramatic recovery for the commodity over the past week. Yet inventories data due to be reported over the session ahead is yet to offer bullish fundamental cues. Another above average injection reading could renew expectations for ample supplies and cap the extent of further gains for gas.

Crude’s rebound from the 77.00 floor has left a bullish reversal candlestick formation in its wake. Yet the scope for a recovery may be limited by nearby selling pressure at the 84.00 handle. Further, trend indicators continue to point downward (descending trendline, 20 SMA, ROC). This leaves a close below the 77 barrier desired to open a descent to the next definitive level near the 2011 low (74.70).

Gold has achieved the 1,158 target offered in recent reports. Downside risks remain in the absence of bullish reversal signals and a sustained presence of a short-term downtrend as indicated by the 20 SMAand ROC. A close below the nearby floor would potentially open the next leg lower to the mid-April ’10 low near 1,123.5.

Silver remains in respect of trendline resistance alongside broader signs of a downtrend. The cut through the 15.60 target offered in yesterday’s report casts the spotlight on the 2010 low near 14.65.

Copper’s intraday rebound has produced a Hammer candlestick on the daily, which should be monitored for confirmation from an ensuing up session. Alongside choppy trade over recent weeks and strong support near the 3.00 handle a more constructive setup is desired to offer a clearer technical bias.

Palladium has slid below the 775.00 floor with trend indicators turning downward. Alongside a lack of bullish reversal signals the stage may be set for a drop to the 735.00 barrier.

Platinum is within striking distance of the 1,187 target offered in recent reports. With bearish technical signals (including trend indicators) still intact a break below the floor would be desired for fresh shorts. The next definitive target to work with is offered by the July 2009 trough near 1,101.