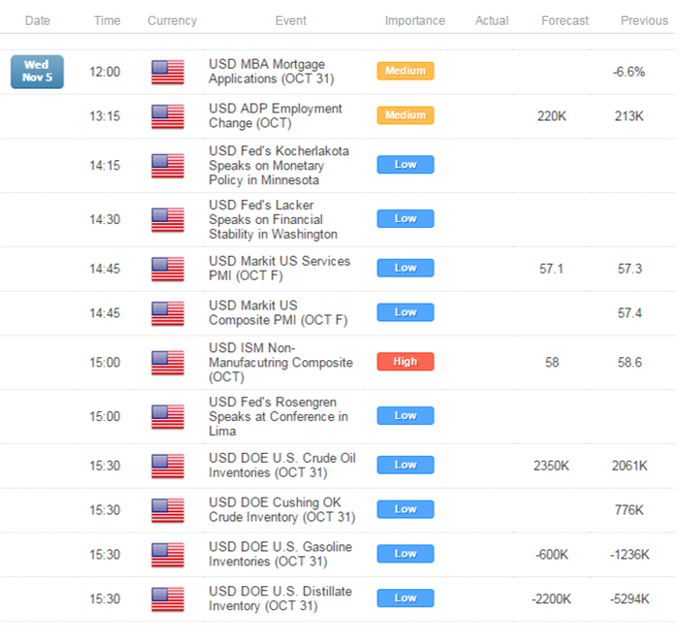 Crude Oil Testing Key Level Ahead Of US Inventories Data

The Crude benchmarks extended their slide on Tuesday as lingering supply glut concerns continued to put pressure on prices. Looking ahead; US Inventories data is tipped to reveal the fifth consecutive weekly rise in total stockpiles. Alongside multi-decade highs for US crude production, this may keep expectations for ample supplies alive and could put further pressure on WTI.

Also in the energy space; natural gas continued its recent climb, posting another gain of over 2 percent for the session. Newswires citied mounting speculation over an incoming US cold snap as a likely catalyst for the weather-sensitive commodity’s ascent. Yet the sustainability of further gains is questionable given inventories figures are yet to reflect more bullish fundamental cues. Another above-average injection figure later in the week could put the brakes on its drive higher.

Turning to the precious metals; US data will be in focus over the session ahead given its potential impact on the USD side of the equation. US Service ISM figures headline the event risk with additional cues afforded by ADP data (which helps to shape expectations for the looming NFP print). On balance US economic data has been quite robust of-late and a continuation of this trend could offer the USD bulls some fresh fuel, which in turn could weigh on gold and silver.

Crude has achieved the 77.00 target offered in recent reports with signs of a downtrend still intact (descending trendline, 20 SMA, ROC). A close below the nearby barrier would warn of a descent to the next definitive level near the 2011 low (74.70). The emergence of a Hammer formation should be monitored for confirmation from a successive up-period.

An Evening Starhas emerged following copper’s retreat from trendline resistance. The key reversal pattern suggests some scope for further weakness. Yet traders should be wary of prematurely adopting short positions given the choppy conditions that have plagued the commodity over recent weeks..

Palladium continues to whipsaw with the most recent pullback leaving a Bearish Engulfing formation in its wake. While considered a key reversal pattern – it should be treated with caution given the metal’s volatile nature in recent weeks. A push below the 775 floor would be required to cement a bearish outlook and open a revisit of the 735 barrier.

Platinum has finally closed outside its1,242 to 1,289 range that had contained the precious metal over the past several weeks. Alongside signs of a short-term downtrend a bearish technical bias is preferred, placing the spotlight on the recent lows near 1,187. A climb back over 1,242 would be required to warn of a base.