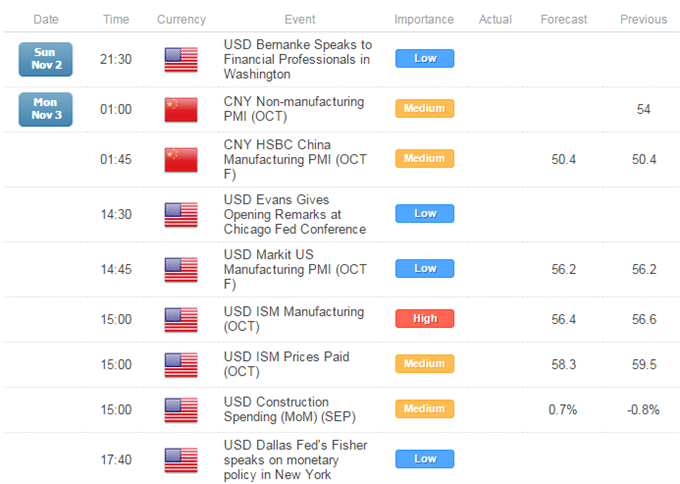 Gold Remains At Risk Ahead Of US Data, Copper Slides On China PMI Miss

Gold and silver extended their declines on Friday as gains for the greenback dragged the precious metals lower by over 2 percent for the session. Looking ahead, the USD may offer further guidance to the alternative assets, putting US ISM Manufacturing figures in focus. The leading indicator is tipped to deteriorate slightly from its prior reading, yet remain well within expansionary territory at a healthy 56.4. Given the upside momentum for the reserve currency the bulls may be easily impressed by an upside surprise, which would spell further weakness for gold. Read more in the weekly outlook for gold and the US Dollar.

Meanwhile, crude oil witnessed a modest decline to wrap up the week as supply glut concerns continue to keep pressure on prices. Over the past several months WTI has proven almost indifferent to robust economic releases from its largest consumer, the US. This suggests a recovery on the back of upcoming ISM data may prove challenging.

Finally, copper is out of the gates to a rough start in early Asian trading today, which follows the release of disappointing Chinese economic data over the weekend. Official Manufacturing PMI figures from the largest consumer of the base metal slipped to their lowest since May. If the upcoming Service PMI and the HSBC Manufacturing data also miss expectations it may add to concerns over slowing growth in the Asian giant – a negative for copper.

Crude remains contained below the 84.00 barrier and within striking distance of the critical 80.00 floor. Alongside a core downtrend (descending trendline, 20 SMA, ROC) a daily close below the 80.00 barrier would be required to open the 2012 low near 77.00.

An Evening Starhas emerged following copper’s retreat from trendline resistance. The key reversal pattern suggests some scope for further weakness. Yet traders should be wary of prematurely adopting short positions given the indication that an uptrend from the 20 SMA persists.

Palladium’s rebound from the 775 floor has left an Evening Starformation lacking confirmation suggesting the bulls are unprepared to relinquish their grip on prices. Moreover, trend indicators (20 SMA and ROC) are pointing higher, suggesting the possibility of a revisit of the 800 barrier. A climb above the nearby hurdle would be required to open the 820 handle.

Platinum has finally closed outside its1,242 to 1,289 range that had contained the precious metal over the past several weeks. Alongside signs of a short-term downtrend a bearish technical bias is preferred, placing the spotlight on the recent lows near 1,187. A climb back above 1,242 and bullish reversal signal would be required to warn of a base for the metal.