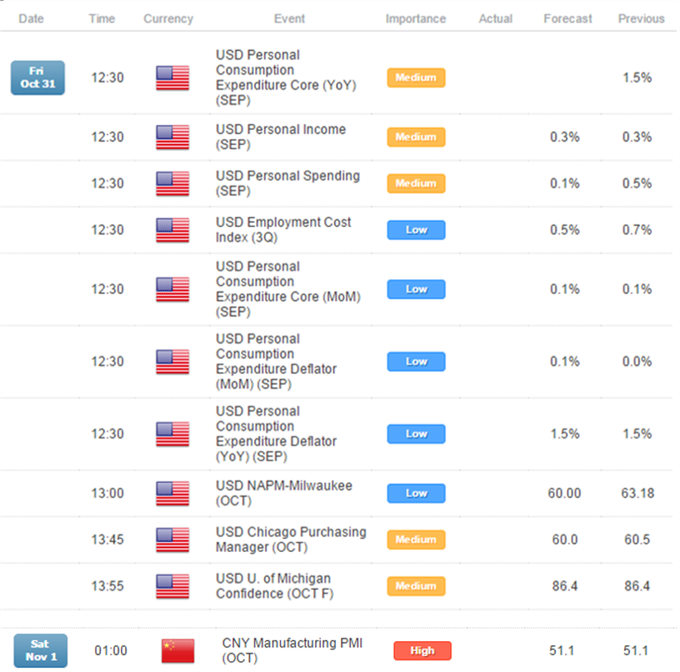 Silver Slumps To Fresh 2014 Low, WTI Within Striking Distance Of $80

Silver has stolen the limelight in the precious metals space after plunging by over 3 percent on Thursday. A number of factors likely contributed to the precipitous drop. These include strong US data raising the attractiveness of high-yielding investments, as well further digestion of the Fed’s decision to end its enormous asset purchase program earlier in the week.

Looking ahead; it may be difficult for gold and silver to find catalysts to renew buying interest. Firmer Fed policy normalization expectations have raised the hurdle for upcoming US data to disappoint and drag the USD lower (which would be positive for the metals). Nonetheless, given the magnitude of recent declines, profit-taking on short positions and a consolidation for gold and silver should not be precluded.

Similarly, crude oil benchmarks may be left lacking positive fundamental cues over the session ahead. Lingering supply glut concerns likely contributed to a slump of close to 1 percent for WTI in recent trading, and may continue to keep pressure on the commodity going forward.

Finally, copper retreated further on Thursday amid a void of fresh news flow on the Indonesian mining workers strike. The absence of supportive supply side cues leaves hopes of a recovery to hang on robust demand signals. This puts upcoming OfficialManufacturing figures from China, the largest consumer of the commodity in focus. Yet even still the threshold for Chinese data to impress the copper bulls appears high, as demonstrated by the responses to recent top-tier releases from the Asian giant.

Crude remains contained below the 84.00 barrier and within striking distance of the critical 80.00 floor. Alongside a core downtrend (descending trendline, 20 SMA, ROC) a daily close below the 80.00 barrier would be required to open the 2012 low near 77.00.

Gold’s latest slump has seen trend indicators align with other bearish signals. Prices have crossed below the 20 SMAand the ROC is now in negative territory. With a short-term downtrend in force the break below the 1,208 barrier suggests a possible revisit of the 2014 low near 1,180.

Silver remains in respect of trendline resistance and its dramatic crash through the 16.70 floor keeps the immediate risks lower. Clearance of the 16.50 barrier would pave the way for a descent on the late February 2010 low near 15.60.

An Evening Star has emerged following Copper’s retreat from trendline resistance. The key reversal pattern suggests some scope for further weakness. Yet traders should be wary of prematurely adopting short positions given indications of an uptrend from the 20 SMA and ROCpersist.

An Evening Star has emerged following palladium’s pullback from the 38.2% Fib.near 800. Confirmation of the reversal signal from a successive down-period would warn of a deeper correction. Buying interest appears evident near 775, which if broken may open a descent on the October lows near 735.