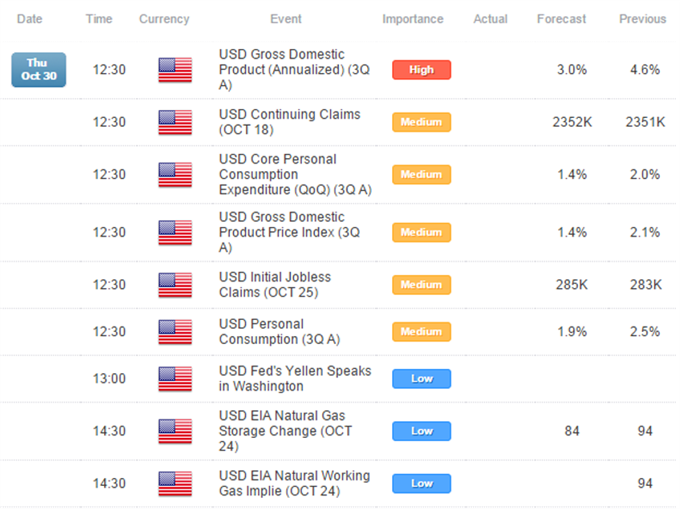 Gold slumped by over 1 percent on Wednesday as FOMC-inspired gains for the greenback dragged the precious metals lower. A focus on improvements in the US labor market and less concern over disinflation risks in the committee’s statement likely reinvigorated the US Dollar bulls.

Looking ahead, US Third Quarter GDP figures are tipped to reveal a healthy annualized 3 percent rise. Robust US data may reinforce the prospect of the Fed moving further towards policy normalization. This in turn could offer further fuel to the greenback and place further pressure on gold and silver.

Turning to the energy commodities; crude oil benchmarks witnessed modest gains in recent trading with newswires citing a positive set of US Inventories figures as a potential catalyst. However, the latest DOE data also revealed a climb in crude production to a fresh multi-decade high. This suggests oil’s recent climb may simply reflect trader repositioning near a critical technical barrier, rather than bullish fundamental cues. While supply glut concerns continue to linger the scope for a recovery for crude may be limited.

Meanwhile, natural gas pricesposted a solid gain of over 3 percent on Wednesday with media sources reporting a forecast shift to colder US weather conditions over the next week. Storage injection data due over the session ahead may set the energy commodity up for further volatility. Recent readings have printed substantially higher than the seasonal average, which has bolstered expectations over ample supplies heading into the US winter. Another above average print could keep these concerns alive and suppress further gains for prices.

Finally, copper has stabilized in recent trade with fresh reports on the Indonesian copper miner’s strike lacking. The story deserves to be monitored for fresh developments that could bolster speculation of production crimps. These could offer a short-term influence on prices, however the lasting impact of such events is often limited.

Crude remains contained below the 84.00 barrier and within striking distance of the critical 80.00 floor. While a Hammerformation has been left in its wake, the bullish signal may find limited follow-through given recent reversal patterns have been met with a lackluster response from traders. Alongside a core downtrend (descending trendline, 20 SMA, ROC) a daily close below the 80.00 barrier would be required to open the 2012 low near 77.00.

Gold’s latest slump has seen trend indicators align with other bearish signals. Prices have crossed below the 20 SMAand the ROC is now in negative territory. With a short-term downtrend in force a break below the 1,208 barrier would suggest a possible revisit of the 2014 low near 1,180.

Silver remains in respect of trendline resistance and its retreat under the 17.30 floor has generated an Evening Starpattern. While typically a reversal signal from a preceding uptrend, the formation indicates the bears are unprepared to relinquish their control of the precious metal. This casts the immediate risk lower for a revisit of the 16.70 floor. Traders should be mindful that subdued negative momentum reflected by the ROC indicator suggests a clean descent may be difficult.

A Shooting Starhas emerged following Copper’s retreat from trendline resistance. The key reversal pattern awaits confirmation from an ensuing down-session to turn the focus lower. Traders should be wary of prematurely adopting short positions given indications of an uptrend from the 20 SMA and ROCpersist.

A Dojicandlestick reveals the palladium bulls are showing signs of hesitation at the 38.2% Fib.near 800. Yet a more definitive reversal signal is desired to suggest a bearish technical bias for the precious metal. A breakout above the nearby barrier would pave the way for a potential ascent on 821. Downside risks are centered on 775.