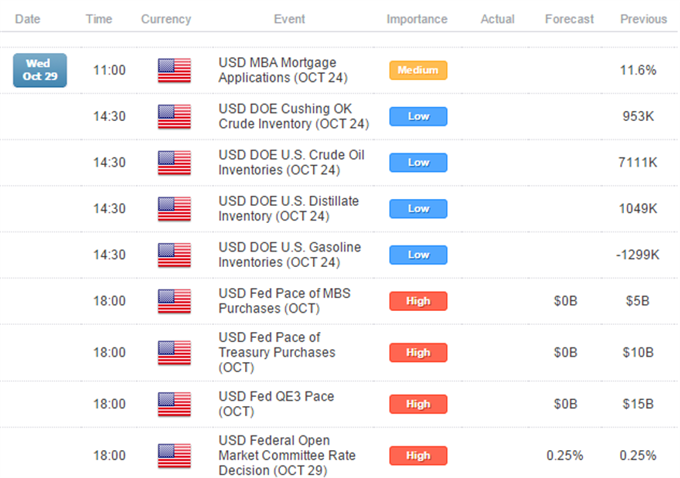 Gold At Risk On Hawkish FOMC Tilt, Crude Rebounds Ahead Of Inventories

Crude oil witnessed another volatile session on Tuesday with WTI rebounding by over 1 percent. Newswires cited a climb in US Consumer Confidence as a potential catalyst behind the recovery. However, given disappointing Durable Goods Orders data also crossed wires, a more likely explanation for the climb may be profit-taking near the critical $80.00 a barrel barrier.

The DOE’s Weekly Petroleum StatusReport due over the session ahead is tipped to reveal the fourth consecutive rise for total crude stocks. Recent figures from the government agency have been overwhelmingly bearish, this includes a climb in the rate of US production to near multi-decade highs. Another round of negative data points may limit the scope for a corrective bounce for WTI.

Natural gas also rebounded strongly in recent trade, which may reflect repositioning from traders following several preceding sessions of steep declines. However, the potential for a sustained advance may be limited if storage data due later in the week keeps ample supply expectations alive. Recent injection figures have remained well-above the seasonal average, which has dragged the commodity lower by more than 14 percent since its September peak.

Turning to the precious metals; gold and silver are bracing for volatility on the back of the upcoming FOMC decision. The central bank is widely expected to continue tapering its asset purchase program, turning the focus to the accompanying statement for clues on the timing of an eventual rate rise. If the central bank downplays subdued inflation expectations and highlights the continued progress in the US labor market it would likely firm policy normalization expectations. This in turn may reinvigorate the USD and weigh on gold.

Finally, copper continued its climb on Tuesday as newswires offered fresh reports on the rapidly evolving miner’s strike story in Indonesia. Workers at one of the world’s largest extraction facilities for the metal are reportedly readying for a potentially month-long strike that threatens to slow production. Further speculation over supply disruptions may offer short-term support to copper. However, as proven by similar scenarios (e.g. South African platinum worker’s strike) the lasting influence on markets is often limited.

Crude remains within striking distance of the critical 80.00 floor. While a Hammerformation has been left in its wake, the bullish signal may find limited follow-through given recent reversal patterns have been met with a lackluster response from traders. Alongside a core downtrend (descending trendline, 20 SMA, ROC) a daily close below the 80.00 barrier would be required to open the 2012 low near 77.00.

Gold’s slide below the 1,241 mark has helped confirm an Evening Starformation which may warn of a deeper setback. Trend indicators also appear to be shifting with prices testing the 20 SMAand the ROCprodding at the zero bound. Confluence of the signals would be required to offer a more concrete bearish technical bias.

Silver remains in respect of trendline resistance and its retreat under the 17.30 floor has generated an Evening Starpattern. While typically a reversal signal from a preceding uptrend, the formation indicates the bears are unprepared to relinquish their control of the precious metal. This casts the immediate risk lower for a revisit of the 16.70 floor. Traders should be mindful that subdued negative momentum reflected by the ROC indicator suggests a clean descent may be difficult.

Copper is at a critical juncture as it faces a retest of its descending trendline on the daily. Trend indicators have recently turned upwards, leaving the metal to await a breakout to offer a bullish technical bias. In the alternative scenario if a pullback and reversal candlestick formation emerges it would turn the risks lower.

Palladium has bound some buying interest renewed at the 775 handle as the 20 SMAturns upwards. While this offers a positive signal some skepticism over a sustained advance is warranted, given recent choppy price action. Further, sellers appear intent on capping the precious metals’ advance at the 38.2% Fib. near 800.