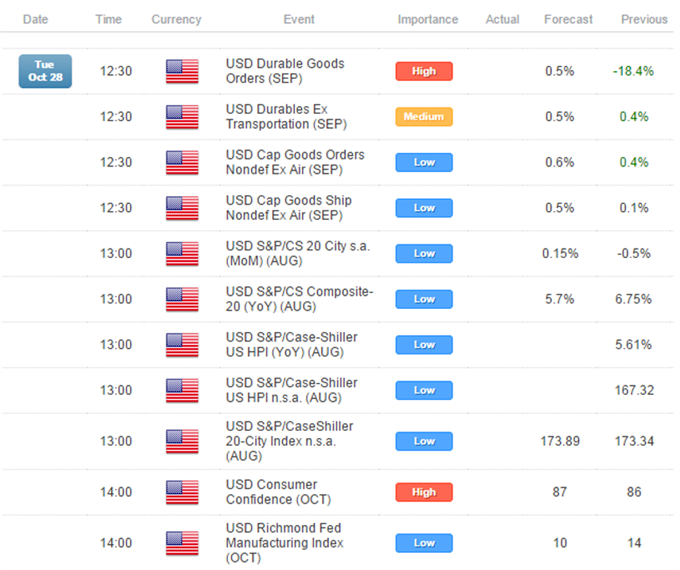 Crude oil has stolen headlines once again with WTI briefly dipping below $80.00 at the outset of the week, to its lowest since June 2012. Clear catalysts behind the retreat were somewhat lacking. Yet the enduring global supply glut concerns likely left the commodity vulnerable to a resurfacing of general negative sentiment. Looking ahead; demand side cues from US data may fail to offset these supply side factors, which may limit the scope for a corrective bounce.

Also in the energy space; natural gas slid for its fourth straight session, posting a decline of over 1.5 percent. Inventories data due on Thursday may offer some further guidance to the weather-sensitive commodity. As noted in recent reports anticipation over ample supplies heading in to the US winter may continue to depress prices.

Meanwhile gold witnessed a surprisingly soft session in spite of commensurate declines for its USD counterpart. It is unusual for the pair to trade in the same direction and it would be reasonable to expect a negative correlation to soon return.

This puts upcoming US Durable Goods Orders and Consumer Confidence figures in focus. A surprise reading to the leading indicators may catalyze a knee-jerk reaction from the USD. However, the potential for follow-through may be limited. This is given traders may be reluctant to adopt fresh positioning ahead of the FOMC decision later in the week.

Finally, copper found renewed strength on reports of a potential workers’ strike at the world’s third largest mining facility for the base metal, based in Indonesia. At this stage there is little to indicate the potential duration of the prospective protests. Yet, as the South African platinum miners’ strike proved, the lasting impact of such events is limited. This may leave copper to seek more sustainable guidance from demand side cues.

Crude is once again pressing against the critical 80.00 floor after witnessing an intraday recovery. While a Hammer formation has been left in its wake, the bullish signal may find limited follow-through. Recent reversal patterns have been met with a lackluster response from traders. Alongside a core downtrend (descending trendline, 20 SMA, ROC) a daily close below the 80.00 barrier would be required to open the 2012 low near 77.00.

Gold’s slide below the 1,241 mark has helped confirm an Evening Star formation which may warn of a deeper setback. Trend indicators also appear to be shifting with prices testing the 20 SMA and the ROC prodding at the zero bound. Confluence of the signals would be required to offer a more concrete bearish technical bias.

Silver remains in respect of trendline resistance and its retreat under the 17.30 floor has generated an Evening Star pattern. While typically a reversal signal from a preceding uptrend, the formation indicates the bears are unprepared to relinquish their control of the precious metal. This casts the immediate risk lower for a revisit of the 16.70 floor. Traders should be mindful that subdued negative momentum reflected by the ROC indicator suggests a clean descent may be difficult.

Palladium has bound some buying interest renewed at the 775 handle as the 20 SMA turns upwards. While this offers a positive signal some skepticism over a sustained advance is warranted, given recent choppy price action.