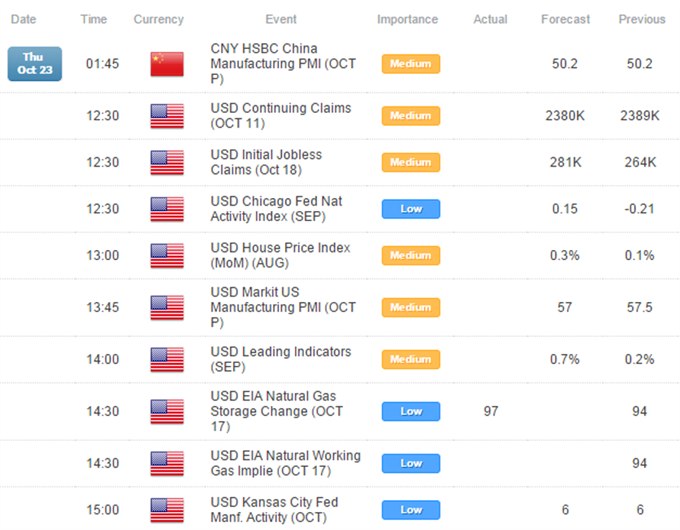 Crude oil plunged by over 2.5 percent on Wednesday following another overwhelmingly bearish US inventories report from the Department of Energy. The government agency revealed a jump in total crude stockpiles by 7.11 million barrels for the week, well-above the consensus forecast. Moreover, refinery utilization slipped to its weakest since March and supplies at Cushing jumped by their highest since July.

Looking ahead, US preliminary manufacturing survey figures are set to cross the wires. Data from the world’s largest crude consumer has been relatively positive of-late. Yet another strong economic reading may do little to offset lingering supply glut concerns, which stand to depress WTI. Nonetheless the extent of recent declines may have opened the door to profit-taking from the bears, suggesting a consolidation should not be precluded.

The precious metals also suffered in recent trade after an upside surprise to US CPI data bolstered the greenback. The unexpected up-tick may have amplified expectations for a more hawkish Fed, which continues to trump inflation-hedge demand for gold and silver.

Upcoming US Manufacturing PMI data may offer the USD some guidance. The reading is tipped to retreat slightly from its recent peak, yet remain firmly within expansionary territory. An upside surprise would likely offer a positive signal for the health of the US economy, which may in turn support the USD and weigh on the precious metals.

Finally, natural gas is once again bracing for another round of weekly storage data. The energy commodity slumped by over 1 percent on Wednesday which may have reflected anticipation over a bearish print. Indeed, another injection figure above the seasonal average is likely to keep expectations over ample supplies alive, which may suppress prices.

Crude is at a critical juncture as it presses against the 80.00 barrier. Alongside a core downtrend (descending trendline, 20 SMA, ROC) a daily close below the nearby floor would open the 2012 low near 77.00.

Gold’s pullback from the 1,257 ceiling has yielded an Evening Star formation. Confirmation from a successive down-day and close below buying interest at 1,241 would be required to warn of a deeper setback. Yet at this stage indications of a short-term uptrend remain intact (20 SMA, ROC).

Silver remains in respect of trendline resistance and its retreat under the 17.30 floor has generated an Evening Star pattern. While typically a reversal signal from a preceding uptrend, the formation indicates the bears remain in control of the precious metal. This casts the immediate risk lower for a revisit of the 16.70 floor. Yet traders should be mindful that subdued negative momentum reflected by the ROC indicator suggests a clean descent may be difficult.

Copper’s wild intraday swings have continued with the latest pullback from the 23.6% Fib. leaving a Bullish Engulfing formation lacking confirmation. While bullish cues may now be lacking for the commodity some buying interest appears evident at the 3.00/01 floor. Alongside a lack of momentum reflected by the ROC indicator a clean run lower is likely to prove challenging.

Palladium’s recovery has faltered at the 23.6% Fib, which has seen a Dark Cloud Cover pattern emerge. The key reversal signal if confirmed by an ensuing down session could herald a revisit of the recent lows near 735. However, traders should be mindful that short-term trend indicators are close to shifting (ROC and 20 SMA), suggesting fading negative sentiment.

Platinum is probing above its 20 SMA alongside a cross above the zero bound for the ROC indicator. This suggests a potential shift in sentiment for the precious metal. Yet a continued climb is likely to prove challenging given the congestion overhead and the nearby 1,289 ceiling. Further a recently produced Bearish Engulfing candlestick pattern suggests the bears are unprepared to relinquish their grip on the precious metal just yet.

Platinum: Turn In “Trend Indicators” Suggests A Shift In Sentiment