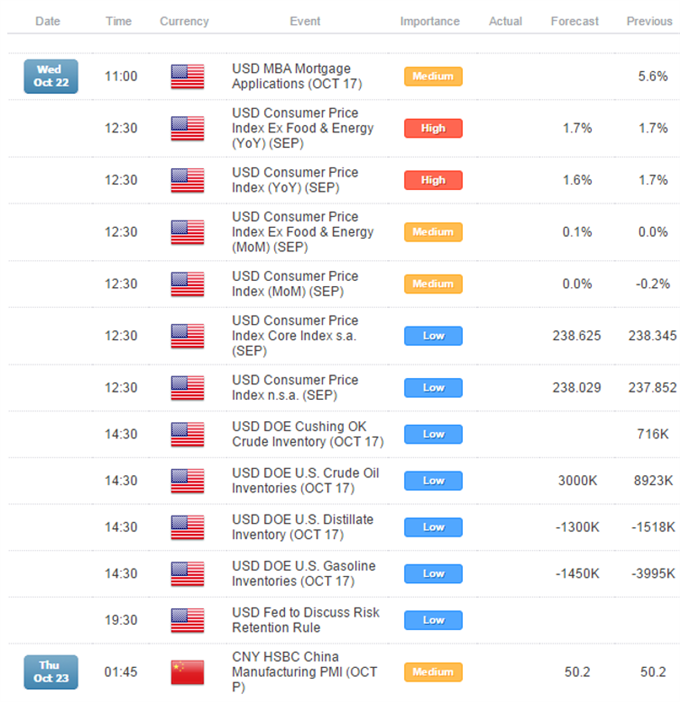 Crude Oil Recovers Ahead Of Inventories, Gold Awaits Cues From US CPI

Crude oil recovered ground on Tuesday with newswires citing positive Chinese economic data as a catalyst behind the recovery. Yet the bulk of WTI’s gains were witnessed long after the release of the figures, which may suggest a “delayed digestion”, or more likely profit-taking amongst short positions.

US crude inventories data lies ahead, which is expected to reveal the third weekly rise for total stocks. Yet it may be difficult for another overwhelmingly negative report to impress the bears and reignite their interest in dragging crude lower. This in turn could afford the growth sensitive commodity a consolidation.

Meanwhile, the precious metals continued their cautious ascent in recent trade, despite a modest advance for their USD counterpart. A positive correlation between the reserve currency and gold is unusual and may prove difficult to sustain.

Looking ahead, US CPI data headlines the event risk for the greenback. The inflation gauge is tipped to slide for the third consecutive month to 1.6 percent. This in turn may do little to bolster Fed rate hike expectations, which in turn could be supportive for gold and silver.

Finally, copper posted its strongest advance in more than a month in another possible display of “delayed digestion” to the Chinese GDP beat. Flash Manufacturing PMI figures from the Asian giant due tomorrow round out the week for Chinese data. The leading indicator is expected to drop into contractionary territory, which could reignite concerns over commodities demand from the regional powerhouse, and weigh on the base metals.

Crude continues to consolidate sub the 84.00 barrier after a Doji signaled reluctance from the bulls to lead the commodity higher. Alongside a core downtrend this leaves the risks focused on a retest of the psychologically-significant 80.00 handle.

Constructive signs remain for gold following a leap over the 1,241 hurdle, descending trendline,20 SMA, and into positive territory on the Rate of Change indicator. This may open a test of former support-turned-resistance at 1,257.

Silver is at a crossroads as it probes above its long-respected descending trendline on the daily. A push into positive territory for the ROC indicator and climb over the 20 SMA suggests a potential turning point in sentiment. Yet scope for a recovery may be limited by sellers sitting overhead at the 23.6% Fib. Level near 17.80.

Copper’s wild intraday swings have continued with the latest lift leaving a Bullish Engulfing formation in its wake. Yet a sustained recovery for the base metal may prove difficult with the 23.6% Fib at 3.03 looming overhead.

Palladium has bounced off the 735 target which has helped to confirm a Piercing Line pattern. Yet at this stage the recovery appears corrective within the context of a broader downtrend for the precious metal. A close below the 735 barrier would open the 695 floor.

Platinum is probing above its 20 SMA alongside a crossover above the zero bound for the ROC indicator. This suggests a potential shift in sentiment for the precious metal. Yet a continued climb is likely to prove challenging given the congestion overhead and the nearby 1,289 ceiling.

Platinum: Turn In Trend Indicators Suggest A Shift In Sentiment