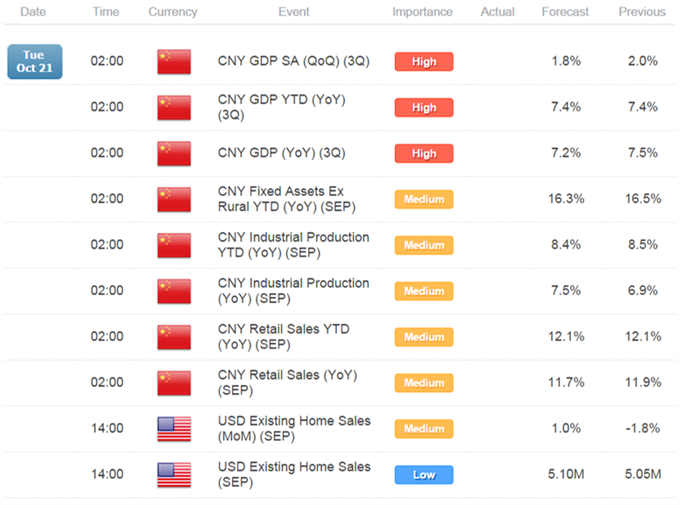 The precious metals climbed at the outset of the week as improving risk appetite dampened safe-haven demand for their US Dollar counterpart. Further, recent “Fed speak” over the past week has been decidedly less hawkish, which has done little to benefit the USD. Amid a light US economic docket over the session ahead these themes could continue to weigh on the greenback, and aid gold and silver.

Meanwhile, crude oil retreated on Monday with newswires citing anticipation that OPEC producers will not adjust output to counter falling prices. Looking ahead, a thin US calendar will likely afford few bullish demand side cues to the growth-sensitive commodity. This may leave lingering supply glut concerns to weigh on the WTI and Brent benchmarks.

Also in the energy space; natural gas prices plunged to their lowest since November 2013 on speculation over milder US weather conditions. Recent storage data has revealed injections well-above the seasonal average. Another strong build from figures due on Thursday would likely amplify expectations for a supply glut and depress prices.

Finally, Copper slumped on Monday ahead of eagerly-awaited top-tier economic data from the largest consumer of the commodity, China. Third Quarter GDP and Retail Sales figures from the Asian giant are tipped to slump to their lowest since 2009. This may fan fears over a waning appetite for commodities from the manufacturing powerhouse, which in turn would be negative for the base metals.

Crude has retreated from the 84.00 barrier after a Doji signaled reluctance from the bulls to lead the commodity higher. Alongside a core downtrend this leaves the risks focused on a retest of the psychologically-significant 80.00 handle.

Constructive signs remain for gold following a leap over the 1,241 hurdle, descending trendline, 20 SMA, and into positive territory on the Rate of Change indicator. This may open a test of former support-turned-resistance at 1,257.

Silver is at a crossroads as it probes above its long-respected descending trendline on the daily. A push into positive territory for the ROC indicator and climb over the 20 SMA suggests a potential turning point in sentiment. Yet scope for a recovery may be limited by sellers sitting overhead at the 23.6% Fib. Level near 17.80.

Copper’s short-lived recovery has faltered at the psychologically-significant 3.00 barrier, which has left a Hammer lacking confirmation. Alongside lingering indications of a downtrend (prices below 20 SMA) this suggests the risks remain skewed lower for a revisit of 2.96.

Copper: Fails To Crack The 3.00 Barrier

Palladium has bounced off the 735 target which has helped to confirm a Piercing Line pattern. Yet at this stage the recovery appears corrective within the context of a broader downtrend for the precious metal. A close below the 735 barrier would open the 695 floor.

Platinum is retesting the 20 SMA which has offered some resistance to the precious metal in the past. This could cap the extent of a rebound. Yet signs of fading downside momentum (ROC indicator) and a climb over the 23.6% Fib.suggests some caution is required when considering re-initiating shorts.

Platinum: At A Critical Juncture As Negative Momentum Subsides