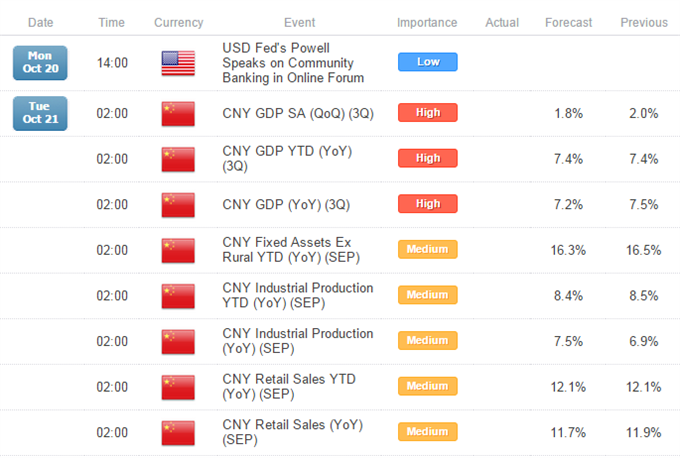 Crude oil ended the session relatively flat on Friday as traders caught their breath following a volatile week. The growth-sensitive commodity witnessed a lackluster response to a climb in US consumer confidence to its highest since 2007. This may reflect some lingering concerns over an expected global supply glut, which may in turn limit the scope for a recovery over the near-term.

Meanwhile, the precious metals were left searching for direction amid a fairly flat session for their counterpart, the US Dollar. A light economic docket over the session ahead may afford gold and silver few cues and could leave their drift to continue. Later in the week US headline CPI data is expected to slide for the third consecutive month. Another subdued inflation reading may dampen Fed rate hike bets which could offer the alternative assets a source of support. Read more on the outlook for the week ahead with the US Dollar forecast and gold forecast.

Finally, copper may be set for further volatility with a busy week for Chinese economic data ahead. Third Quarter GDP figures and Retail Sales data from the Asian giant are tipped to slump to their lowest since 2009. This may fan fears over a waning appetite for commodities from the Asian giant and depress prices for the base metal.

Crude’s recovery has stalled ahead of the 84.00 handle, which does little to inspire confidence in the Bullish Engulfing formation on the daily. Alongside a core downtrend this leaves the risks focused on a retest of the psychologically-significant 80.00 handle.

Gold is struggling to sustain its recent strength following a leap over the descending trendline, 20 SMA, and into positive territory on the Rate of Change indicator. A climb over former support-turned-resistance at 1,241 would be required to pave the way for a revisit of the 1,257 barrier.

Silver’s recent rebound remains seen as corrective within the context of a broader downtrend on the daily (20 SMA and descending trendline). Yet with downside momentum fading (reflected by the ROC) a consolidation remains the more likely path, rather than a sharp decline.

Copper’s rebound has produced a Hammer formation which awaits confirmation from a successive up-day and climb above 3.00. Yet lingering indications of a downtrend (prices below 20 SMA) suggests risks remain skewed lower for a revisit of 2.96.

Palladium has bounced off the 735 target leaving a Piercing Line pattern in its wake. Yet at this stage the recovery appears corrective within the context of a broader downtrend for the precious metal. A close below the 735 barrier would open the 695 floor.

Platinum has found some buying interest renewed at the 1,242 barrier which has yielded a Piercing Line formation on the daily. The key reversal candlestick pattern awaits confirmation from an ensuing up session to signal a potential turnaround. A close below the 1,242 floor would suggest a resumption of the downtrend and open the recent lows near 1,186.