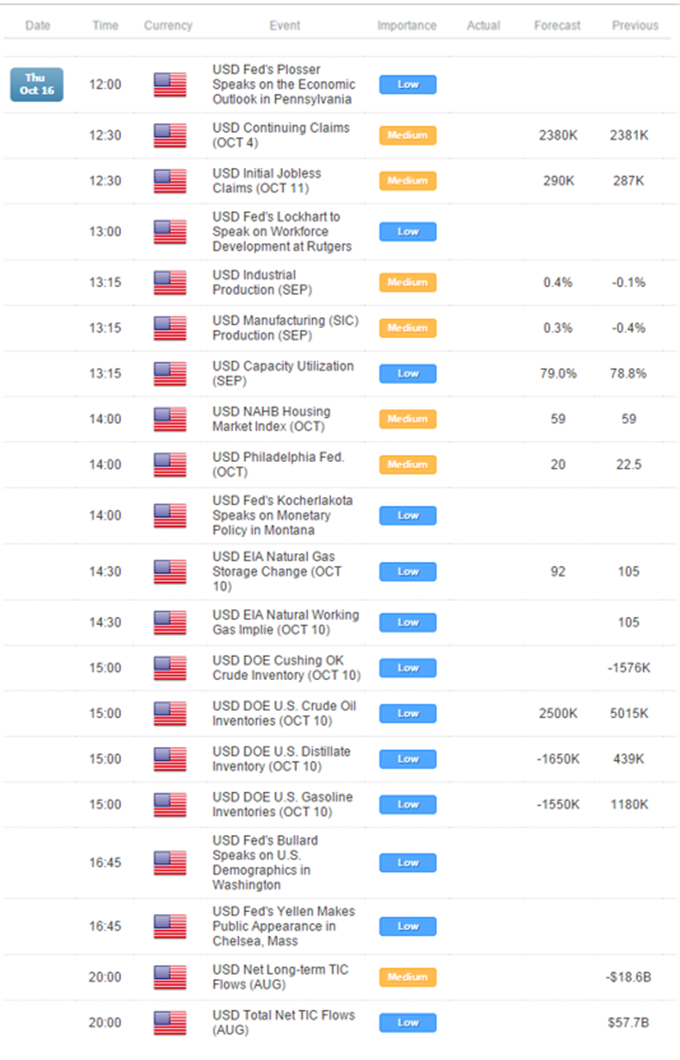 Crude oil suffered further heavy losses on Wednesday as ongoing concerns over a global growth deceleration weighed on the commodity. The crude benchmarks remain firmly in ‘bear market’ territory with WTI now 24 percent below it June peak, while its sibling Brent has witnessed a staggering decline of over 27 percent.

Thursday brings the release of the DOE’s Weekly Petroleum Status Report, which was delayed by one day due to the Columbus Day holiday on Monday. The government agency is tipped to reveal a second consecutive rise in total crude stocks. This follows an overwhelmingly bearish set of figures released last week, which reflected another climb in the rate of US crude production to another multi-decade high. It will likely be difficult for the upcoming report to ease concerns over a swell in global supplies, which could in turn keep prices suppressed.

Also in the energy space; natural gas awaits the release of upcoming storage data. Another injection above the seasonal average would likely keep ample supply expectations alive and keep pressure on the commodity.

Meanwhile, gold and silver saw a rollercoaster ride of a session as their US Dollar counterpart swung wildly in intraday trade. Again, the global growth concerns story seems to be offering the reserve currency some cues. Rather than risk-aversion offering some support via safe-haven demand, dampened Fed rate hike bets appear to be in the driving seat for the USD.

Looking ahead; Initial Jobless Claims data and Industrial Production figures are due during US hours. Yet, the medium-tier economic prints may play second fiddle to broader market sentiment as investor nerves remain jittery. Enduring global growth concerns and a commensurate fading of firmer US monetary policy expectations could continue to weigh on the USD. This in turn could offer gold and silver some support.

Finally, copper suffered a significant slide of over 2 percent on Wednesday as investors dumped risk-sensitive instruments. A slide in Chinese CPI proved insufficient to stoke PBOC stimulus bets and support the growth-sensitive commodity. This follows policy official recent reiteration of a reluctance to introduce strong easing measures. Given the relatively well-anchored policy expectations upcoming Chinese Loan Figures could prove another non-event for the base metal.

Crude oil has cracked the 84.00 barrier and continues its journey through no man’s land towards the ’12 low at 77.00. With a core downtrend intact and absence of reversal signals the commodity may be primed for further weakness.

Gold has maintained its upward trajectory after leaping over the descending trendline, 20 SMA, and into positive territory on the Rate of Change indicator. A climb over former support-turned-resistance at 1,241 could pave the way for a revisit of former the 1,257 barrier.

Gold: Signs Of An Uptrend Emerge

Silver’s recent rebound remains seen as corrective within the context of a broader downtrend on the daily (20 SMA and descending trendline). Yet with downside momentum fading (reflected by the ROC) a consolidation remains the more likely path, rather than a sharp decline.

Copper has once again returned to the 3.00/1 floor after failing to clear the 38.2% Fib. near 3.10. The wavering over the zero bound for the Rate of Change indicator and whipsaw around the 20 SMA does little to confirm a clear trend for the commodity. A daily close below the nearby 3.00 barrier would be required to offer a bearish technical bias and open a descent on 2.96.

Palladium has failed to breach the 38.2% Fib. near 801 and respected the 20 SMA on the daily. This has left the precious metal to return to its downward trajectory. The close below 775 opens a revisit of the recent lows near 735. However, some caution in playing the downside is warranted given the fading negative sentiment suggested by the Rate of Change indicator.

Palladium: Respect Of Key Fib. Puts 735 Back On The Cards

Platinum continues to cling to the 23.6% Fib. near 1,263 as a parade of Dojis denote indecision amongst traders. A more convincing close below the 1,250 handle would be required to open a revisit of the recent lows near 1,186.