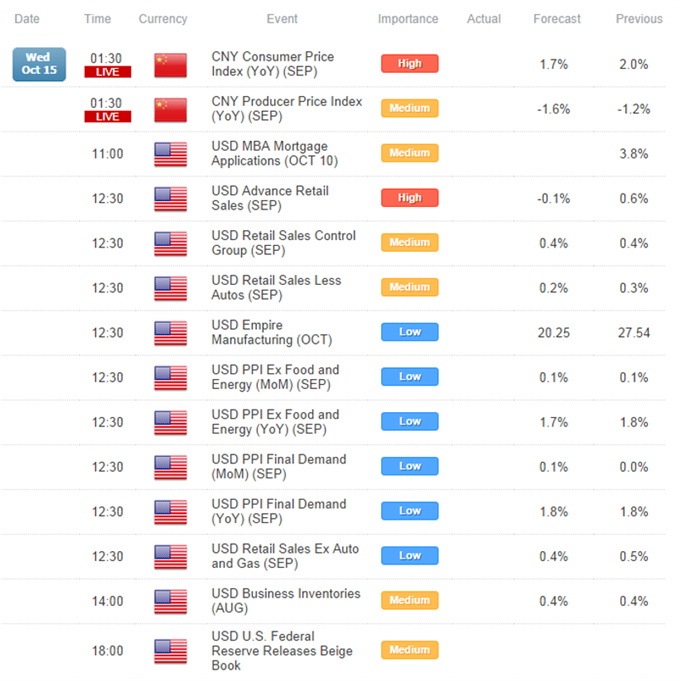 Crude oil collapsed during trading on Tuesday as supply glut and global growth concerns continue to keep pressure on the commodity. Over the session ahead US Advance Retail Sales and the Fed’s Beige Book headline the US calendar. Yet the threshold for US data to bolster expectations for more robust demand for WTI may be high. Additionally, the weekly release of the DOE’s Petroleum Status Report has been pushed back to Thursday due to the Columbus Day holiday on Monday. This could leave the commodity lacking bullish fundamental catalysts, which may keep prices suppressed.

Turning to the precious metals; gold and silver saw modest declines over the most recent session as broad-based US Dollar strength weighed on the pair. The USD faces an interesting set of potential scenarios over the remainder of the week. On the one hand, disappointing US data may dampen Fed rate hike bets and weigh on the greenback. On the other, poor figures from the world’s largest economy may feed risk-aversion which could benefit the safe-haven currency. This in turn leaves gold lacking a clear directional bias

Finally, copper found renewed buying interest on Tuesday after Chinese monetary authorities cut short-term refinancing rates. Yet policy officials recently signaled more powerful measures are not needed to stimulate the Asian giant at this stage. This suggests a high hurdle for upcoming inflation data to stoke a policy response from the PBOC. This may in turn leave copper awaiting fresh positive cues from elsewhere.

Crude oil has cracked the 84.00 barrier and entered no man’s land on the journey towards the ’12 low at 77.00. With a core downtrend intact and absence of reversal signals the commodity may be primed for further weakness.

Gold has vaulted over its descending trendline on the daily only to find selling pressure renewed at the 38.2% Fib. The Rate of Change indicator’sprobe into positive territory signals some upside momentum. Alongside a climb above the 20 SMA this suggests a short-term uptrend may be emerging. Clearance of the 1,236/1,241 region could pave the way for a revisit of former support-turned-resistance at 1,257.

Silver’s recent rebound remains seen as corrective within the context of a broader downtrend on the daily (20 SMA and descending trendline). Yet with downside momentum fading (reflected by the ROC) a consolidation may be a more likely path than a sharp decline.

Copper’s launch from the 3.00/1 floor has found selling interest renewed at the 38.2% Fib. near 3.10. A climb over the 20 SMA and push into positive territory for the Rate of Change indicator may suggest the emergence of an uptrend. However, some skepticism over further gains may be warranted given trendline resistance remains hanging overhead.

Palladium has failed to breach the 38.2% Fib. near 801 and respected the 20 SMA on the daily. This suggests we may see the precious metal return to its downward trajectory. A close below 775 would open a revisit of the recent lows near 735. However, some caution in playing the downside is warranted given the fading negative sentiment suggested by the Rate of Change indicator.

Palladium: Respect Of Key Fib. Puts 775 Back On The Cards

Platinum’s recovery has stumbled ahead of the 38.2% Fib. and 20 SMA. However, a pair of Dojis does little to inspire confidence in the potential for a resumption of the downtrend. A more convincing close below the 1,263 mark would be required to open a revisit of the recent lows near 1,186.