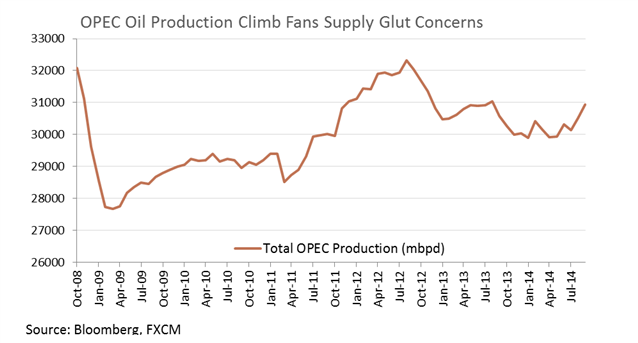 The precious metals were lifted by broad-based US Dollar weakness during trading on Monday. Newswires pointed to dovish comments from Fed officials as a possible catalyst behind the USD’s dip. Looking ahead; a light US economic docket may offer the greenback bulls few sources of inspiration to stage a return. In turn this could offer gold and silver some further breathing room.

Meanwhile, crude oil benchmarks resumed their descent at the outset of the week with Brent leading the pack (-1.89 percent). Supply glut concerns continue to keep pressure on the energy commodities. This follows reports that Iraq will join fellow OPEC producers Iran and Saudi Arabia in instituting price cuts on their crude exports. The latest developments compound concerns created by a jump in total OPEC production to its highest level in close to a year.

The thin US calendar over the session ahead leaves a lack of potential bullish demand side cues for crude. This could in turn make a recovery for WTI challenging. Yet given the magnitude of recent declines a consolidation should not be neglected.

Finally, copper saw modest gains on Monday following a jump in Chinese ore imports of the base metal to their highest on record. The latest trade figures help alleviate concerns of a waning appetite for commodities from the Asian giant. However, alongside a mixed bag of recent economic data from the Asian giant fears over a broader deceleration of economic growth may continue to linger. These may suppress the potential for a greater advance for the growth-sensitive commodity.

Small buying interest has been renewed at the 84.00 handle for WTI. Yet in the context of a core downtrend a recovery may prove difficult. This leaves a close below the nearby barrier desired to open a descent on the ’12 low at 77.00

Crude Oil: Awaiting Close Below 84.00 To Open Next Leg Lower

Gold has vaulted over its descending trendline on the daily only to find selling pressure renewed at the 38.2% Fib. The Rate of Change indicator’sprobe into positive territory signals some upside momentum. Alongside a climb above the 20 SMA this suggests a short-term uptrend may be emerging. Clearance of the 1,236/1,241 region could pave the way for a revisit of former support-turned-resistance at 1,257.

Silver’s recent rebound remains seen as corrective within the context of a broader downtrend on the daily (20 SMA and descending trendline). Yet with downside momentum fading (reflected by the ROC) a consolidation may be a more likely path than a sharp decline.

Copper remains at a crossroads as it skims across the 3.00/1 floor after failing to post a more convincing daily close below the barrier. Amid the presence of a short-term downtrend a breakout could set the scene for a descent on the 2.96 barrier. Yet the Rate of Change indicator and a sea of Dojis suggests the bears have lost momentum for the time-being.

Palladium has failed to breach the 38.2% Fib. near 801 and respected the 20 SMA on the daily. This suggests we may see the precious metal return to its downward trajectory. A close below 775 would open a revisit of the recent lows near 735. However, some caution in playing the downside is warranted by fading sentiment suggested by the Rate of Change indicator.

Palladium: Respect Of Key Fib. Puts 735 Back On The Cards

Platinum’s recovery has stumbled ahead of the 38.2% Fib. and 20 SMA. Alongside a Shooting Star formation the bears seem unprepared to relinquish their grip on prices. The daily close below the 1,263 floor would see the precious metal turn its sights on the recent lows near 1,186.

Platinum: Sights Turn Back To 1,186 With Downtrend Intact