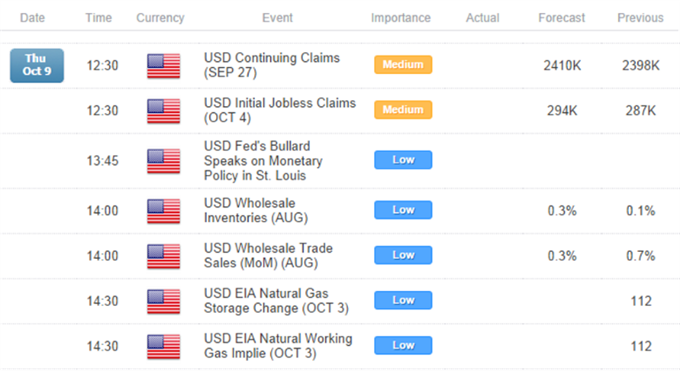 The precious metals advanced across the board on Wednesday after a dovish set of FOMC Minutes likely prompted profit-taking on USD longs. After 12 straight weekly advances the threshold to reinvigorate the greenback bulls may be high. This suggests a light US docket over the session ahead that includes Initial Jobless Claims may struggle catalyze a recovery for the reserve currency. In turn this could afford gold and silver a further consolidation.

Meanwhile, WTI carved another 2014 low in recent trade as the DOE’s Weekly Petroleum Status report revealed an overwhelmingly bearish set of figures. Total crude stocks climbed by just over 5 million barrels for the week – the largest increase since April. Further, US crude production rose to another multi-decade high and refinery utilization declined to its lowest since June. The latest round of figures are likely to leave supply glut concerns to linger and leaves the commodity lacking bullish fundamental cues. Nonetheless, a correction for the crude benchmarks should not be neglected, given the speed and magnitude of recent declines.

Also in the energy space, natural gas was dumped by traders (-2.01 percent) ahead of storage data due on Thursday. Another weekly injection above the seasonal average could keep anticipation over ample supplies alive and may continue to keep prices depressed.

Crude oil has maintained its downward trajectory with the 2013 low near 85.45 in its crosshairs. The ongoing downtrend and absence of reversal signals further reinforces the prospect of continued weakness. A daily close above former support-turned-resistance at 88.20 would be required to mark the potential for a base.

Gold is at a crossroads near the 1,222 barrier as sentiment appears to be shifting. A daily close above the nearby barrier would be required to indicate the potential for a more sustained recovery. This may prove difficult given the overhanging trendline resistance.

Silver’s recent rebound is seen as corrective within the context of a broader downtrend on the daily. A more convincing close above former support-turned-resistance at 17.30 would be required to mark the potential for a more sustained recovery. Yet with downside momentum fading (reflected by the ROC) a consolidation may be a likely path for the precious metal.

Copper remains at a crossroads as skims across the 3.00/1 floor after failing to post a more convincing daily close below the barrier. Amid the presence of a short-term downtrend a breakout could set the scene for a descent on the 2.96 barrier.

Palladium is probing above the 38.2% Fib. hurdle near 801 which if broken with a more convincing daily close could herald an advance on 820. Negative sentiment that has plagued the precious metal also appears to be shifting as witnessed on measures like the Rate of Change indicator.

Platinum has removed an impediment to its recovery at the 23.6% Fib. Level near 1,260. This may afford the precious metal an advance on the next barrier near 1,308. Yet a more sustained push higher would be questionable given the context of a core downtrend on the daily (signaled by the 20 SMA and ROC).