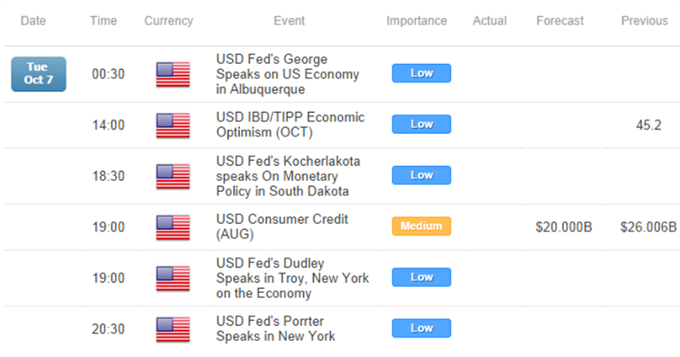 Gold and silver rebounded strongly at the outset of the week as their pricing currency the US Dollar succumbed to profit-taking. Looking to the session ahead the greenback may continue to offer the precious metals guidance. A light US docket may leave the reserve currency with little fresh fuel to resume its ascent. Further, with long positioning teetering near its highest on record and silver shorts near extremes a consolidation for the metals may be due.

Similarly, crude oil benchmarks are seemingly taking their cues from the USD side of the equation. A weaker greenback may afford the growth-sensitive commodities some breathing room. Yet amid lingering global supply glut concerns a sustained recovery is a questionable prospect. Moreover, an absence of major US economic data over the session ahead is unlikely to inspire bets for robust demand from the world’s largest consumer for the commodity.

Crude oil is retesting its initial “breakout” point at 90.45. If respected on a daily close basis this may see the commodity take its next leg lower towards the 2013 low at 85.45. Moreover, with prices below the 20 SMA and the ROC in negative territory, the immediate risks remain lower for WTI.

After hurtling towards the 1,180 target offered in recent reports gold has rebounded to retest the 1,208 barrier. If respected it would turn the spotlight back to the commodity’s recent lows. While the downtrend remains in force, signs of exhaustion should be monitored closely. This includes the emergence of a Piercing Line pattern which if validated by a successive up-day may herald a corrective bounce.

Gold: Rebounds After Hurtling Towards 1,180 Target

Silver’s recent rebound is seen as corrective within the context of a broader downtrend on the daily. Downside risks remain for the precious metal while sub the 17.30 barrier, which keeps the spotlight on the low seen in late March ’10 near 16.50. A daily close over the 17.30 hurdle would help confirm a Bullish Engulfing formation and hint at a base for the precious metal.

Copper is at a crossroads as it presses against the 3.00/1 floor after it failed to post a more convincing daily close below the barrier. Amid the presence of a short-term downtrend a breakout could set the scene for a descent on the 2.96 barrier. However, the emergence of a Morning Star pattern indicates a potential shift in sentiment. This in turn suggests a short-term corrective bounce should not be precluded.

Palladium has recovered some lost ground which has yielded a Hammer candlestick on the daily. Yet the key reversal pattern awaits confirmation from a successive up-session before being confirmed. Until this is received the sustained presence of a downtrend keeps the immediate risks lower. A close below buying interest at the 76.4% Fib. near 748 would open the late Feb. lows at 727.

After rapidly sailing through territory not seen since 2009 platinum’s dramatic recovery is thus far seen as corrective. Amid a core downtrend a retest of the 23.6% Fib. at 1,263 may see selling interest renewed. This leaves the focus on the precious metal’s recent lows near 1,186.6.