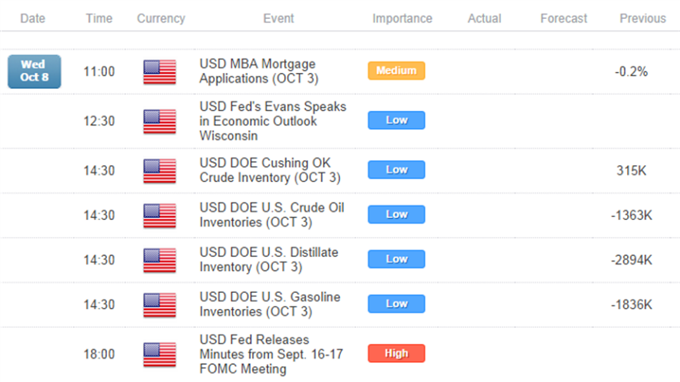 WTI crude plunged to a fresh 2014 low on Tuesday (-2.13 percent) as lingering global supply glut concerns continue to weigh on the commodity. Looking ahead, US inventories data may struggle to generate a rebound for oil given the lackluster response to recent reports. With the US rate of production elevated near multi-decade highs it may be difficult to alleviate anticipation over ample supplies.

Further, the risk-sensitive commodity may be exposed to a general souring in investor sentiment if global equity benchmarks continue their tumble. Nonetheless a consolidation for the crude benchmarks should not be precluded in light of the speed and magnitude of recent declines, which could see shorts take some chips off the table.

Meanwhile, gold has managed to stabilize in recent trade as its pricing currency, the USD, shows signs of exhaustion. 12 straight weekly advances and a light US economic docket at the outset of the week likely left the greenback exposed to profit-taking.

The FOMC Meeting Minutes headline the USD event risk over the session ahead. The interest rate upgrade by the Fed in September built firmer expectations for policy normalization in the US. This may have already been priced in to some extent, which suggests the threshold for the Minutes to reinspire the reserve currency may be high.

Crude oil has respected and retreated from its initial “breakout” point at 90.45. Alongside evidence of an ongoing downtrend this may see the commodity take its next leg lower towards the 2013 low at 85.45. Some small buying interest appears evident around the commodity’s 2014 low at 88.20.

Gold is clinging to the 1,208 mark as downside momentum appears to be fading. While this could set the commodity up for a consolidation, a more significant recovery may be a stretch. This is in light of its descending trendline and the sustained presence of a downtrend. Further, the emergence of a Doji formation suggests reluctance by traders, and does little to confirm the Piercing Line pattern near the commodity’s recent lows.

Silver’s recent rebound is seen as corrective within the context of a broader downtrend on the daily. While sub the 17.30 barrier the immediate risks remain lower, which keeps the spotlight on the 16.50 floor. A daily close over the 17.30 hurdle would be required to hint at a base for the precious metal.

Copper is at a crossroads as it hovers above the 3.00/1 floor after failing to post a more convincing daily close below the barrier. Amid the presence of a short-term downtrend a breakout could set the scene for a descent on the 2.96 barrier.

Palladium has soared over a pair of Fib. hurdles which has helped to confirm a Hammer formation on the daily. This may be the precursor to a greater recovery, yet amid a core downtrend some skepticism over a further advance may be warranted. Selling interest may be renewed at the 792 mark.

After rapidly sailing through territory not seen since 2009 platinum’s dramatic recovery is thus far seen as corrective. Amid a core downtrend a retest of the 23.6% Fib. near 1,264 has proven a barrier to its advance. This leaves the focus on the precious metal’s recent lows near 1,186.6.