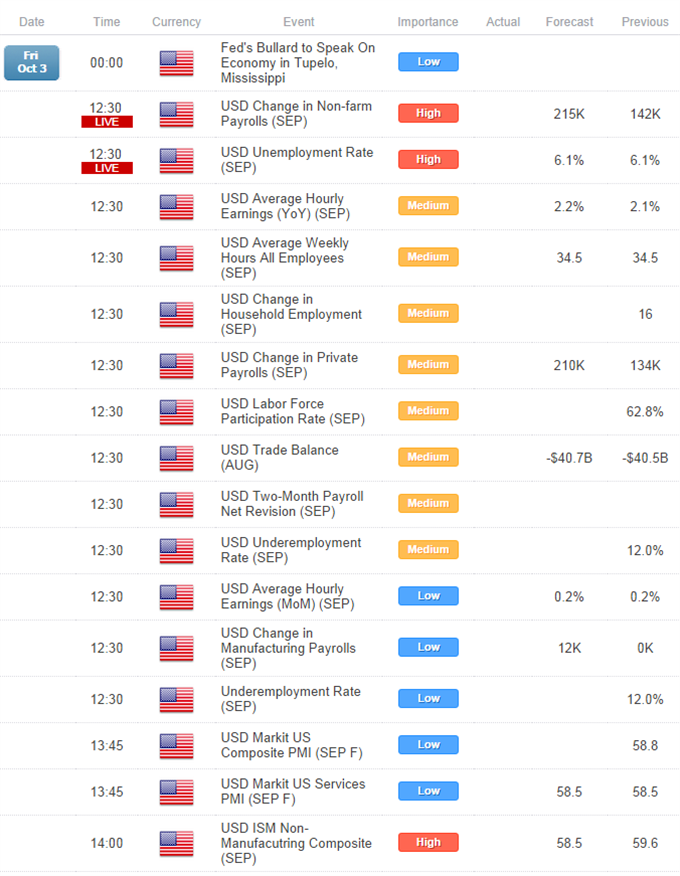 Gold and silver are prepping for volatility ahead of the release of the September US Non-Farm Payrolls print due over the session ahead. The pair have swung between gains and losses throughout the week at the mercy of their pricing currency, the US Dollar.

The greenback’s march higher over recent weeks may have left the door open to profit-taking. Further, the reserve currency’s dip on the back of beats to this week’s ADP and Initial Jobless Claims prints suggests it may be particularly vulnerable if NFPs miss forecasts. Nonetheless, it would be reasonable to expect that an upside surprise to the headline jobs added figure could catalyze a knee-jerk jump from the greenback and weigh on the precious metals.

Fed policy makers will be looking for improvements in broader measures of labor market activity, including wage growth. Improvements in such indicators may be required to generate a more hawkish tone from the FOMC, which in turn would offer a more sustainable source of strength for the US Dollar.

Meanwhile, crude oil staged a dramatic recovery in trading on Thursday after plunging by close to 3 percent during the session. Lingering global supply glut concerns may be hard to alleviate over the session ahead, which could continue to weigh on the crude benchmarks. Yet given the speed and magnitude of recent declines a consolidation should not be precluded.

Also in the energy space; natural gas suffered another slide after storage data revealed the largest injection for the same period since 1994. This is likely to keep anticipation over ample supplies alive, which could depress prices for the commodity over the near-term.

Crude oil remains at a critical juncture after posting a daily close back above the 90.45 floor. This leaves a Hammer formation to await confirmation from a successive up-day. Yet amid the presence of a core downtrend the risks of a break below buying support remain. A daily close underneath the nearby floor at 90.45 could pave the way for a descent on the 2013 low at 85.45.

Crude Oil: Awaiting Break After Climbing Back Over 90.45 Hurdle

Gold continues to endure a consolidation between the 1,208 and 1,222 congestion zone. A medley of short body sessions and Doji candlesticks highlight the hesitation from traders within the narrow trading band. Yet against the backdrop of broader downtrend a more convincing daily close below the 1,208 floor could pave the way for a descent on the 2013 lows near 1,180.

Silver’s recent rebound is seen as corrective within the context of a broader downtrend on the daily. Downside risks remain for the precious metal while sub the 17.30 barrier, which keeps the spotlight on the low seen in late March ’10 near 16.50. A daily close over the 17.30 hurdle would be required hint at a base for the precious metal.

Copper is at a crossroads as it presses against the 3.00/1 floor after it failed to post a more convincing daily close below the barrier. Amid the presence of a short-term downtrend a breakout could set the scene for a descent on the 2.96 barrier.

Palladium remains at risk of further declines after failing to breach the 61.8% Fib near 780. Alongside broader bearish signals a break below buying interest at 765 would open the 76.4% Fib. near 748.

Platinum’s voyage into territory not seen since 2009 has left the precious metal with thin buying interest. Coupled with a core downtrend the stage may be set for further weakness for the precious metal. The close below the 1,285 floor may open up a retest of the 1,260 handle.