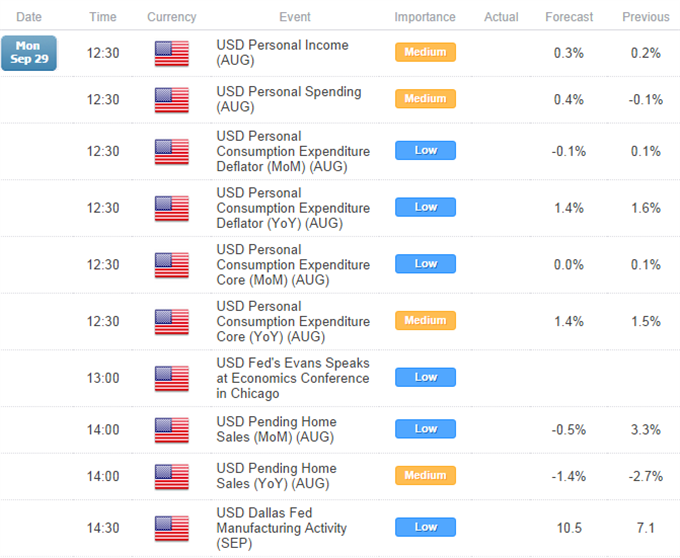 The precious metals continue to suffer at the hands at their pricing currency the US Dollar. Silver is currently weaker by 0.8 percent in early Asian trading today with platinum stewing near its lowest level in 15 months. Meanwhile, copper prices have slumped to their lowest since June as reports of escalating protests in Hong Kong raise Chinese demand concerns.

Firmer Fed policy normalization bets helped propel the US Dollar to its 11th straight weekly gain last week. Such a string of consecutive advances alongside record long positioning amongst futures traders may warn of exhaustion. Yet a catalyst to shift the overwhelmingly positive sentiment against the greenback may be difficult to find at the outset of the week. It would likely take a material downside surprise to upcoming US PCE Data to disrupt the reserve currency’s advance. In turn this could keep pressure on gold and silver.

Meanwhile, the crudeoil benchmarks are marginally weaker at the outset of the week (WTI currently -0.65 percent, Brent -0.34 percent). Newswires have cited concerns over pro-democracy protests in Hong Kong as a potential catalyst behind the declines for the risk-sensitive commodity. This follows a rebound on Friday which was attributed to a strong revised US GDP print (the highest since 2011).

Robust US data over the week ahead may bolster expectations for healthy demand from the world’s largest consumer of the commodity. This could help offset the supply glut concerns that have plagued crude over recent months. In turn this could afford WTI a period of consolidation, yet a sustained recovery remains questionable.

Crude oil is having another case of déjà vu as it probes above its descending trendline on the daily. The bears appear to be losing their grip on prices after a Harami pattern failed to find confirmation. Further, prices are teasing at a climb over the 20 day MA following a crossover into positive territory from the ROC indicator. Sellers are likely sitting in the 94.50 (23.6% Fib) to 95.00 region.

Crude Oil: Teases At A Shift In Sentiment

Gold is teasing at a break beyond the 1,222 ceiling that has kept the precious metal capped over recent weeks. Yet after a Hammer formation failed to find confirmation, some doubts over a recovery remain. Against the backdrop of core downtrend a daily close below the 1,208 floor would open the next leg lower to the 2013 lows near 1,180.

Gold: Awaiting Clearance From Congestion Zone Between 1,208 and 1,222

The copper bears are showing signs of exhaustion near the 3.01 floor. Within the context of a short-term downtrend a close below the nearby barrier would open the next leg lower to 2.96.

Copper: Awaiting Close Below Nearby Barrier To Open Next Leg Lower

The sustained presence of a downtrend for Palladium warns of further weakness for the precious metal. Further, a failure to close above the 820 ceiling alongside a Doji formation indicates hesitation from the bulls to return to the commodity. This leaves it awaiting a daily close below buying interest at 792 to generate a push towards the April lows at 765.

The platinum bears have returned in force after a Hammer candlestick had warned of exhaustion. Amid a sustained downtrend the slide under the July ’13 low puts the 1,285 floor in focus. A daily close above former support-turned-resistance at 1,314 would be required to hint at a correction higher.