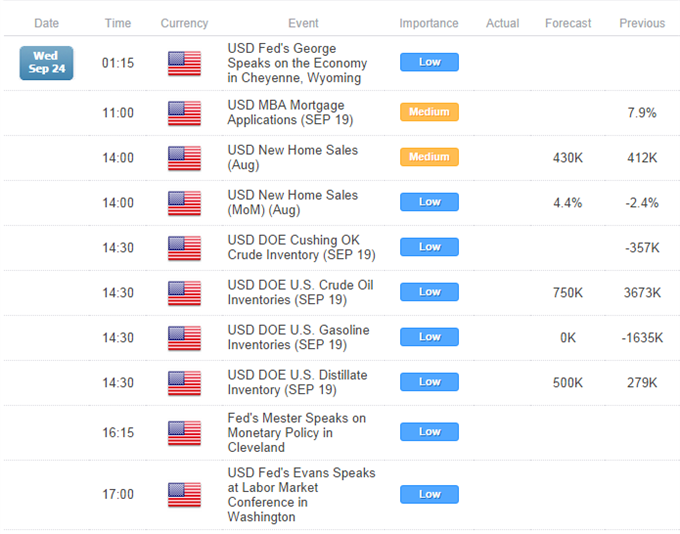 Most major commodities are treading water during the Asian session as the US dollar bulls take a breather. The upcoming Weekly Petroleum Status Report from the DOE may offer crude oil some guidance. Total inventories are tipped to rise for the second consecutive week. Alongside a parabolic increase in production revealed in recent reports WTI may be left looking elsewhere for bullish fundamental cues. Nonetheless, the extent of recent declines may have opened the door to some profit-taking on short positions, suggesting a corrective bounce should not be precluded.

Meanwhile, gold and silver may take some bearings from the direction of their pricing currency; the USD. Firming Fed policy normalization expectations have kept sentiment towards the greenback positive over the past month. While it may have lost some steam at the outset of the week the threshold for damaging policy bets and turning the tide against the USD appears high. This suggests it would likely take a material deterioration from upcoming US New Home Sales figures to lead the reserve currency lower. This in turn could keep pressure on gold and silver.

The latest developments in the Iraq conflict deserve to be monitored for their potential to bolster safe-haven buying of the alternative assets. Yet at this stage it appears it would take a material escalation of the turmoil to catalyze a recovery for gold and silver.

Crude remains at a critical juncture as it teases traders near the 90.20 barrier. Against the backdrop of a sustained downtrend a daily close below the noteworthy level would be seen as a fresh selling opportunity. This would pave the way for the next leg lower to the 2013 lows near 85.45. While a Bullish Engulfing pattern has presented itself, it requires confirmation from a successive up-period before suggesting the potential for a recovery.

Gold is left at a crossroads near the 1,222 barrier. A Morning Star pattern has emerged for the precious and awaits validation from an ensuing up-period to open the prospect of a sustained recovery. However, the 20 SMA and ROC indicators continue to warn of weakness. Buying interest appears to have been renewed near 1,208, which if broken would cast the risks lower to the 2013 lows near 1,180.

Gold: Morning Star Threatens To Yield A Recovery If Confirmed

A Doji formation on the daily suggests traders have succumb to indecision on Silver. This does little to confirm a Hammer candlestick, which leaves the precious metal lacking reversal signals. Sellers are likely to arrest any gains for the alternative asset at the 18.19 ceiling. Against the backdrop of a sustained downtrend on the daily, a corrective bounce would be seen as an opportunity for fresh short positions.

Copper has slid under the 3.08 floor, opening a knock on the next barrier at 3.01. A downtrend appears to be emerging for the base metal given the signals offered by the 20 SMA and Rate of Change indicator. However, recent price action has been relatively choppy, warning that a smooth ride lower may be difficult. Further, an Inverted Hammer lies in its wake, which if validated by an ensuing up-day may signal the potential for a retest of 3.08.

The presence of a short-term downtrend for Palladium warns of further weakness for the precious metal. Akin to its siblings the recent recovery has yielded a bullish candlestick pattern. Yet in the shadow of a downtrend, a corrective bounce would be seen as a fresh selling opportunity with a target offered by the June lows near 792.

The platinum bears appear to be taking a breather ahead of the 1,314 target offered in recent reports. Within the confines of a core downtrend, scope for a recovery may be limited. A retest of former support-turned-resistance at 1,360 would be seen as a new opportunity to enter short positions.

Platinum: Scope For A Recovery May Be Limited Within Confines Of A Downtrend