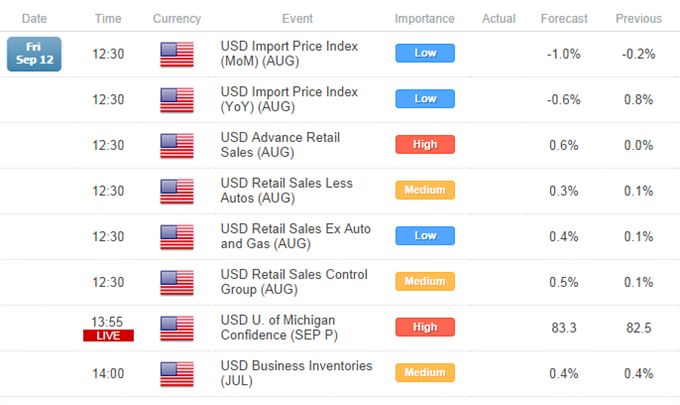 Gold, Silver Dumped As USD Flexes Its Muscles Ahead Of Retail Sales Data

The precious metals have come under further fire in Asian trading today (gold -0.54 percent, silver -1.06 percent) as the US Dollar continues to prove its might. Over the session ahead, upside surprises toUS Advance Retail Sales and consumer sentiment figures may catalyze further gains for the greenback. Amid firming Fed rate hike expectations the threshold for positive data to bolster the reserve currencyappears relatively low. This in turn could keep pressure on gold and silver.

Meanwhile, crude oil traders’ attention has once again been turned to the hotspots for geopolitical turmoil. Threats of further sanctions on Russian energy producers have rekindled concerns over crude oil supply disruptions, catalyzing a recovery for the commodity. Yet, at this stage the bounce appears ‘corrective’ rather than representative of a complete shift in sentiment. With Western Europe unlikely to cut off its largest energy supplier the fundamental drive for a sustained recovery may be limited.

Also in the energy’s space; natural gas has been sent reeling after significantly higher-than-anticipated storage injection figure was reported for the week. Recent readings have remained well-above seasonal averages, which has bolstered expectations for ample supplies heading into the US winter. A continued trend of elevated injection figures would likely keep prices suppressed below the $4.00 handle.

WTI’s rebound from the 91.20 floor has yielded a Bullish Engulfing pattern, which hints at a recovery for the commodity. Yet follow-through may prove difficult with trendline resistance looming nearby. A retest and respect of the overhanging barrier would offer a fresh opportunity for new short positioning. Whereas an upside breakout would suggest a small base and warn of a shift in sentiment.

Gold has achieved the 1,241 target offered in recent reports. An absence of reversal signals alongside a sustained downtrend on the daily casts the immediate risk lower. Clearance of the June lows would likely see buying interest renewed at 1,233.

Silver stopped just shy of the 18.50 target offered in recent reports. The noteworthy floor may see some buying interest renewed and set the metal up for a consolidation. Yet against the backdrop of a core downtrend on the daily and void of bullish signals, a sustained recovery may prove difficult.

Copper remains at a crossroads near 3.08 following a dramatic decline from its descending trendline on the daily. A Hammer formation hints at the potential for a corrective bounce, yet awaits confirmation from a successive up-day. Further, the scope for gains may be limited in light of the broader bearish backdrop for the base mental. A daily close below the nearby floor would open a run on the 3.01 mark.

The tide has turned for palladium after the precious metal breached its ascending trend channel on the daily. Further, the slide below the Head and Shoulder’s neckline (866) suggests a downside target of 817.

Platinum’s grind lower has continued alongside a core downtrend on the daily. The push below soft buying support at 1,383 has cast the spotlight on the 2014 lows near 1,360, below which would see 1,314.