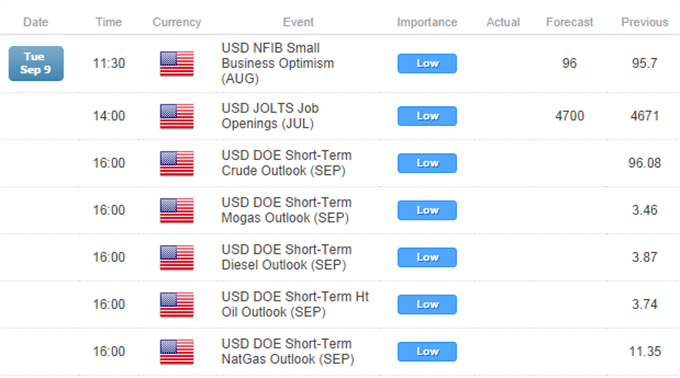 The precious metals are marginally weaker in Asian trading (silver -0.16%, palladium -0.56%) as US Dollar strength permeates the broader market. A research note from the US Federal Reserve released on Monday suggested investors were underpricing a rate hike from the central bank, which has likely aided the greenback’s ascent.

A thin US economic docket lies ahead. This raises a question mark over whether the US Dollar bulls can continue their charge amid a void of supportive news flow. Nonetheless the tide has certainly turned in favor of the reserve currency over recent months as speculation over Fed tightening gathers pace. Alongside ebbing geopolitical concerns this leaves gold and silver in a precarious position near noteworthy technical levels of support.

Crude oil and copper have also likely suffered at the hands of their pricing currency. The DOE’s upcoming Monthly Short-Term Energy Outlook report may do little to inspire a recovery for the crude benchmarks. The set of global forecasts from the government agency for energy demand and consumption are often met with little fanfare by traders.

Coupled with fading Iraqi and Russian supply disruption fears WTI and Brent may be left lacking bullish fundamental cues. However, the potential for a “corrective bounce” should not be overlooked given the speed and magnitude of recent declines.

WTI is poised for a make-or-break moment as the commodity is compressed between its descending trendline and the 92.55 barrier. While a Hammer hints at potential shift in sentiment to the upside, it lacks confirmation from a successive up day. A downside break of the nearby floor would open a knock on the 91.20 mark.

Gold is threatening to maintain its downward trajectory after sliding below the 1,257 mark. Alongside signs of a short-term downtrend the spotlight is left on the June 2014 lows near 1,241. A daily close above the its descending trendline would be required to raise the prospect of a sustained recovery for the precious metal.

Silver is hanging by a thread as it probes below the critical 19.00 barrier with a core downtrend still intact. A daily close below the noteworthy floor would be seen as a fresh opportunity for short positions targeting the 18.50 mark. A corrective bounce to the 19.50 ceiling would offer an alternative entry point.

Sellers appear intent on capping copper below its descending trendline on the daily. A Shooting Star formation and respect of the 3.19 ceiling suggests the upside may be limited for the base metal. Yet price action continues to be messy and a clean run lower may prove difficult. Buying interest may be renewed on a retest of the recent lows near 3.13.

Palladium’s upside momentum appears to be stalling with a Bullish Engulfing formation on the daily failing to find follow-through. Further, a Head and Shoulders reversal pattern is taking shape which would warn of a top if the 866 neckline were broken. Yet within the context of a core uptrend; while above 866 the risks are skewed to the upside.

Platinum is threatening a breach of the 1,395 target offered in recent commodities reports. The support level may see some buying interest renewed, yet downside risks remain given the context of a sustained downtrend on the daily. A daily close below the barrier would set the scene for a run on the 1,360 handle.

Platinum: Awaiting Breakout To Open A Run On 1,360