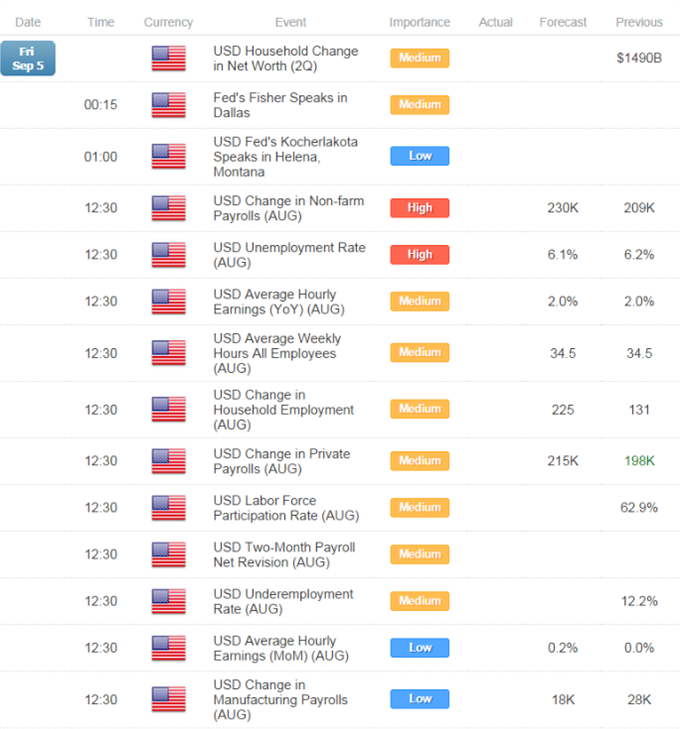 Gold and silver face a make-or-break moment with US NFPs set to cross the wires over the session ahead. The precious metals were sent reeling in trading on Thursday as the US Dollar bulls continued their charge on the back of a beat to US service sector activity data. The greenback could find further fuel on the back of a beat to the upcoming jobs added figure or headline unemployment rate.

However, policy makers continue to note concerns over broader measures of labor market activity, including the pace of wage growth. Until the complete picture shows greater signs of improvement the Fed will likely remain hesitant to hike rates from record lows. This in turn raises some doubts over the potential for USD momentum to continue without a more hawkish shift in “Fed-speak”.

Meanwhile, crude oil has been left lacking bullish fundamental cues after a mixed US inventories report this week. Drawdowns in total stocks and supplies at Cushing were reported. Yet these positive signs were largely offset by a wind down in refinery utilization - signaling fading demand for the commodity after the height of the ‘driving season’. Further, US crude production remains elevated close to its peak for the year (the highest rate in close to three decades).

On the geopolitical front; ongoing conflict in Iraq and Eastern Europe remains a distant blip on traders’ radars at this point. Further, concerns over crude oil supply disruptions from either region are almost non-existent. This leaves bullish supply side drivers seemingly lacking, and suggests the potential for a sustained recovery for the crude benchmarks may be difficult.

WTI remains capped below its descending trendline on the daily with the 20 SMA also offering some resistance. This leaves the immediate risks skewed to the downside and sets the scene for a retest of the recent lows near 92.55.

Gold’s crawl under the 1,272 floor turns the immediate risk lower for the precious metal. Clearance of the 1,257 barrier could see an extended decline towards the June lows near 1,241. However, it should be noted that a low ATR reading generally does not favor a sustained move following a breakout. This could make a clean run lower difficult.

Gold: Clearance Of The 1,280 Hurdle Casts The Immediate Risk Lower

Silver is at a critical juncture near the psychologically-significant $19.00 handle. Against the backdrop of a downtrend on the daily shorts remain preferred. However, given the proximity of current prices to the nearby floor, awaiting a break before adopting new positions may be a more prudent course of action.

Silver: Awaiting Leap Over Nearby 19.00 Hurdle

A Piercing Line formation has emerged for copper which may warn of a corrective bounce. However, selling into rallies is preferred at this stage given the broader bearish signals. These include the descending trendline and resistance offered by the 20 SMA. Buying interest is likely to emerge at the 3.08 floor.

Copper: Piercing Line May Be Overlooked Against Broader Bearish Backdrop

Palladium may be set to retest the 900 barrier following the emergence of a Bullish Engulfing formation on the daily. Within the context of a core uptrend; while above 866 the risks are skewed to the upside. A break below the ascending trend channel would be required to warn of a top and indicate the potential for further weakness.

Downside risks remain for platinum given the context of a sustained downtrend on the daily. The push past the 1,412 barrier suggests the potential for a descent on the April lows near 1,395. A climb above the descending trendline would be required to warn of a base and the possibility of a sustained recovery.

Platinum: Sellers Reemerge After Failure To Crack The 1,424 Ceiling