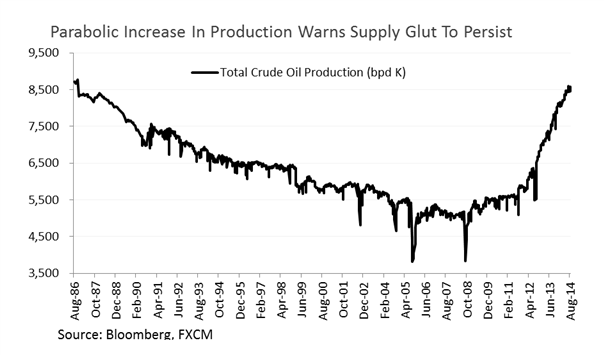 Crude Oil Turns To Inventories, Silver At A Critical Juncture

Gold and Silvercontinue their consolidation in Asian trading today with the precious metals seemingly uninspired by the latest developments in the Middle East and Eastern Europe. In the absence of a more material escalation in the regional conflicts safe-haven demand for the alternative assets remains at risk.

On the US Dollar side of the equation; a light economic docket over the session ahead leaves the greenback with few potential catalysts to spark further gains. This in turn could ease some of the pressure on gold and silver.

Meanwhile,Crude oil traders will be turning to the upcoming DOE Weekly Petroleum Status Report due shortly. Yet recent broadly bullish reports from the government agency have failed to catalyze a shift in sentiment for WTI. This casts some doubt on the potential for another drop off in total crude stocks to yield a recovery for the benchmark.

Traders will also be eyeing production figures contained within the report, which remain just shy of their 2014 peak (the highest since 1986). The parabolic increase in the rate of US crude production warns of a persistent supply glut, which in turn bodes ill for crude prices.

A suggested in recent commodities reports a consolidative period for crude is likely in the near-term (days). This is supported by fading downside momentum reflected by the Rate of Change indicator alongside an ensemble of short body candles. However, against the backdrop of a core downtrend on the daily, selling into corrective bounces remains the preferred approach. A breach of the 95.00 barrier would be required to shift the bias to the upside.

Gold is teasing at a recovery as it probes above the 1,280 barrier on the back of an Inverted Hammer formation. A more convincing daily close beyond the hurdle would likely confirm the bullish reversal signal. This in turn would suggest a potential run on the recent highs near 1,322.

Gold: Hints Of A Recovery Emerge

Silver is at a critical juncture as it teases at a close above its descending trendline on the daily. A break above the 19.45 mark would be the first sign of a potential recovery and open a push towards former support-turned resistance at 19.75. An ensemble of Dojis alongside a tick higher in the Rate of Change indicator suggest fading downside momentum for the precious metal.

A sharp correction for Copper has yielded a Bearish Engulfing formation that may warn of further weakness. However, conflicting signals are presented by the Rate of Change indicator and 20 SMA. Both measures suggest an uptrend may be forming. This suggests awaiting confluence from the full spectrum of tools may offer a safer approach to playing the base metal.

A collection of Doji candlesticks near the 885 floor warn of fading upside momentum for Palladium. Yet with the core uptrend intact the 900 ceiling remains within reach. A break below the ascending trend channel would be required to warn of a top.

Palladium: Hovering At 885 Floor With Uptrend In Force

Platinum has managed to regain its footing at the 1,412 floor as buying interest is renewed. However, the potential for a sustained recovery may be limited while signs of a downtrend remain intact. This leaves the 1,395 target intact. A climb above the descending trendline would be required to warn of a small base.